'A huge problem': Correctional officers in Alberta hospitalized after exposure to fentanyl during searches

Several correctional officers in Alberta have been hospitalized after accidental exposure to fentanyl during searches. Their union is concerned the next incident could be fatal.

Several correctional officers in Alberta have been hospitalized after accidental exposure to fentanyl during searches, and their union is concerned the next incident could be fatal.

In July, seven correctional officers at two institutions were exposed to the highly toxic drug, and three of them were hospitalized after receiving Narcan, a medicine used to treat opioid overdoses, the Union of Canadian Correctional Officers says.

"We've had some significant exposures, some officers have been sent to hospital in an ambulance," said Ryan DeBack, a vice-president with the union.

Fentanyl is so potent, a dose the size of a grain or two of sand can be fatal. Adding to the potential danger for prison staff, the union says, is the fact fentanyl is often mixed with other drugs and can be inhaled accidentally or absorbed through the skin.

The latest incident took place at the Bowden Institution, located 120 km north of Calgary, on July 21, when a correctional officer was searching a vehicle in the parking lot, according to a source.

Despite wearing a surgical-type mask and gloves, the correctional officer was exposed to what's believed to be fentanyl. Co-workers administered Narcan after the officer lost consciousness.

EMS confirmed a prison official in his late 20s was taken to hospital in Innisfail.

"People are wondering, 'When's the next time that my co-worker or even myself are going to go down?'" said DeBack.

Fentanyl being mailed to inmates

Last month at the Edmonton Institution, six officers were exposed to what is believed to be fentanyl while searching inmates' mail.

At least two doses of Narcan were administered and two officers were hospitalized, according to DeBack.

In June, officers intercepted a shipment of fentanyl worth $13,000 destined for an Edmonton Institution inmate.

"It's so prevalent among the drug culture … this stuff is everywhere," DeBack said. "And unfortunately our clientele that we watch over is not exactly at times known for their sound judgment."

DeBack says the union is working with Correctional Service Canada to implement practices and policies that will mitigate the risks officers face.

The correctional service refused to do an interview but did provide a written statement to CBC News saying employee safety is a "fundamental priority."

"Despite all the best precautions, there may be rare occasions when someone is accidentally exposed to fentanyl or other highly toxic substances."

The correctional service says it issued a protocol last month to its front-line staff concerning the handling, testing, storage and disposal of fentanyl.

Latex gloves, surgical-style masks and safety goggles are provided to those front-line workers. 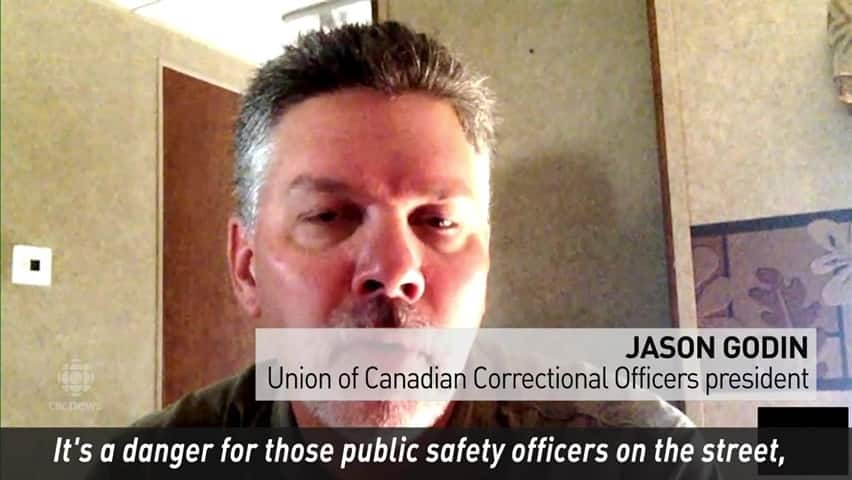 Prison guards in Alberta are overdosing on fentanyl during searches

4 years ago
0:17
Union concerned next accidental exposure could be fatal 0:17

'How do we do our jobs effectively?'

But DeBack says Narcan needs to be more readily available to officers, and that lessening the pressure to conduct speedy searches could also improve workplace safety.

But it's hard to know when fentanyl is present, which means it's hard to identify situations that should trigger lockdowns, slower, more careful searches and heavier safety gear.

"How do we do our jobs effectively? How do we protect the inmates, how do we protect the Canadian public without us being seriously injured or worse?" asked DeBack, who said it's not feasible for officers to do their job wearing biohazard or Tyvek suits on a regular basis.