Imagine a new generation of solar cells so lightweight and portable that you can roll one up, carry it in your pocket and then stick it on a window to power a light bulb. That's the vision of University of Calgary researchers on a quest for the holy grail of solar energy.

University of Calgary team hopes to make solar cells so portable, you can roll it up and put in a pocket 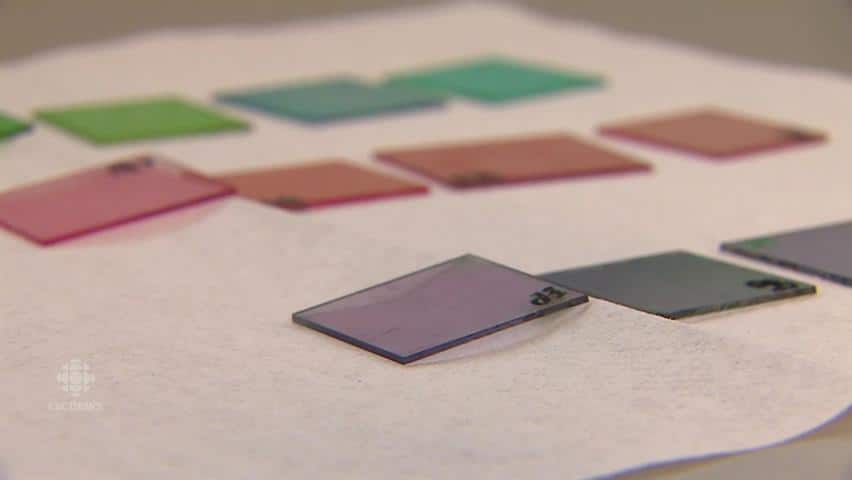 Solar power of the future

5 years ago
1:41
Instead of massive, and clunky solar panels — a team of University of Calgary researchers are trying to make solar cells that can be printed, like ink, on any material. 1:41

Imagine a new generation of solar cells so lightweight and portable that you can roll one up, carry it in your pocket, then stick it on a window to power a light bulb.

That's the vision of Gregory Welch, an assistant professor of organic chemistry at the University of Calgary. He's leading a team of researchers on a quest for the holy grail of solar energy.

"It's an organic solar cell and the real catch there is that these organic materials are soluble. They can be dissolved in a solution and printed on substrates just like newspaper. The printing aspect allows us to print on plastics and foils and thus we can make a very flexible solar cell."

If successful, said Welch, the solar cells would also be coloured and transparent.

"So we can start making decorative solar cells, or even solar cells for windows where you can still see through it. But now your window is converting photons to electrons," he said.

"What's really neat, too, is that these flexible solar cells are really form-fitting. So you can start to mend them to various surfaces and and various structures so it really adds an architectural flare to solar cell technology, which opens up new avenues and markets for power production."

Solar panels have come a long way since the first modules were used in space nearly 60 years ago. But even with all the improvements, setting up a modern solar system in a home could cost $10,000 to $40,000.

Printable solar cells would cost a fraction of that, said Welch.

"What we look at is the energy payback time," he said.

"Currently the first and second generations of solar cells could take anywhere from five to 20 years until you've recouped the cost of producing this so-called 'free energy' from the sun. We hope for an energy payback time that could be one year — as little as six months."

To reach their goal, researchers are drawing resources from both Alberta's oil and gas sector and its budding technology sector.

Welch said the organic compounds being used to develop this new generation of solar cells are pieced together from oil and gas byproducts.

"What we do is we take these petrochemicals and we do some creative chemistry to them," he said.

"We fuse them together, we take molecules, then macromolecules and we make them in such a way that they can absorb and emit light — they're like dyes," said Welch.

And like the dye in our jeans, the core structure is organic. But as a "conjugated organic," it can delocalize electrons, giving it semiconductive properties — science speak for essentially the ability to convert sun's energy into electricity.

In order to find the perfect material for printable solar cells, Welch and his team have to make, identify and test hundreds of compounds. To speed up the process, they're using a state-of-the-art machine that was also developed in Calgary.

Portable device as innovative as laptop

Test tubes, papers and a dozen or so machines sit on top of counters in a lab on the fifth floor of the university's EEEL (Energy. Environment. Experiential Learning) building. A core piece of this project is a newly acquired apparatus called the Nuclear Magnetic Resonance Spectrometer (NMR).

It's about the size of a toaster.

Graduate student Jonathan Cann, 22, took a drop of solution from a beaker and placed it into the machine. Ninety seconds later, a graph showed up on the screen, identifying exactly what's in the molecules of the liquid sample.

To the untrained eye, this process may seem routine, but Welch remembers a time when it took hours to get results.

Not only was the old spectrometer slow, the system was also very big and heavy, with each instrument weighing and measuring about the size of a Smart car.

The portable NMR, by contrast, is similar to what a laptop is to the old mainframe computers. It's an innovation of Nanalysis, the third tech company founded by self-described Calgary boy Sean Krakiwsky.

"An NMR spectrometer is like an MRI machine for chemists," said Krakiwsky, a U of C alumnus. "It takes a picture of molecules of the liquid being analyzed."

The machine can within minutes identify any liquid being dropped into it — a useful tool for Welch's project, which requires testing dozens of samples a day.

The race for an affordable solar solution

Researchers in Calgary hope all the time saved will help expedite the process of finding that holy grail of solar energy. They're in a race against other scientists around the world.

"That's the end game. The whole area of organic solar cells has been going on for a number of years — probably since the late '80s this concept has been introduced," said Welch.

"A Nobel Prize was awarded to Alan Heegar and a few colleagues in 2000 for the discovery of conducting organic materials. Since then it's just snowballed into these new applications."

"Bring the University of Calgary some recognition, file some patents in one to two years," he said.

And he would like to develop a working prototype within five to 10 years — that can later be marketed to the public, with the help of industry players.