A year after it was torn and burned, Pride flag raised in Taber

It wasn't on the community flag pole, but the LGBTQ2​ Pride flag raised Saturday in Taber, Alta. was given a much more prominent spot.

'Every Albertan deserves to feel safe in their communities' 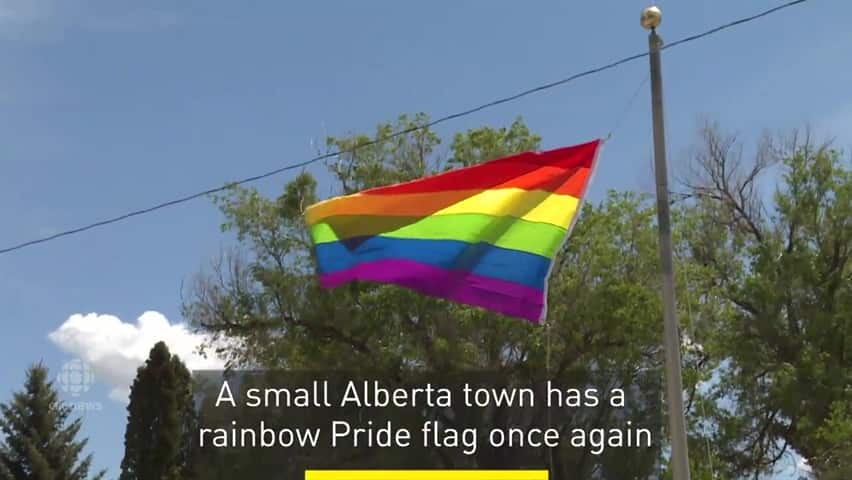 It wasn't on the community flag pole, but the LGBTQ2​ Pride flag raised Saturday in Taber, Alta., was given a much more prominent spot.

About 100 people gathered to watch the rainbow flag raised from the small town's provincial building.

MLA Shannon Phillips told the gathered crowd that when she first heard in January that the town's council had denied the Taber Equality Alliance's request to fly the flag for Pride month, she called her fellow MLA Sandra Jansen. Despite it being 6 a.m., she asked Jansen, "Can we fly this flag?"

"By about noon that day we had the decision that we'd fly the flag here, and it had the happy coincidence of being almost within spitting distance of the Town of Taber, which was extra satisfying," Phillips said.

The LGBTQ2 group was first allowed to fly the flag in the town's Confederation Park last summer. It was shredded by vandals, then lit on fire days later.

When the group applied to raise the flag again this year, the town passed a motion stipulating no flags other than the Alberta, Canada or Taber flags could be flown from the flag pole.

"Every Albertan deserves to feel safe in their communities," Phillips said.

"I just wanted to say that we are with you as a government."

Sean Todd is a member of the Taber Equality Alliance and is on the committee that planned the Pride celebration.

He said in the 18 years he's lived in the small town, he has seen more people come out in support of LGBTQ2 rights.

"It's getting better. When I was younger and I came out, you had to be quiet about it because this town is based a lot on religion," said Todd. "Our allies are stepping up. We've got a lot more allies than we did last year.

Another committee member, Johnathan Strojwas, said while he was initially "disheartened and angered" that council wouldn't allow the group to fly their flag, he didn't plan on letting it stand in the way of the Pride celebration.

"We're ready to keep on going and do what we do best and have a good time."

Calgary-Hawkwood MLA Michael Connolly said this year was his second attending Taber's Pride celebration, and that he was heartened both times to see the turnout.

"If 10 years ago anyone had said 300 people would celebrate pride in Taber, they would have been laughed out of the room. And I am so proud that this town was able to do that," he said.

The provincial government is providing security to ensure the flag won't be vandalized again.

Taber is a town of just under 10,000 people. It is located about 50 kilometres east of Lethbridge, another place that has seen its Pride celebrations tarnished by vandals.

With files from Anis Heydari