Preston Manning spoke Friday about a controversial video that appears to show Calgary home builders trying to get their preferred candidates on city council. 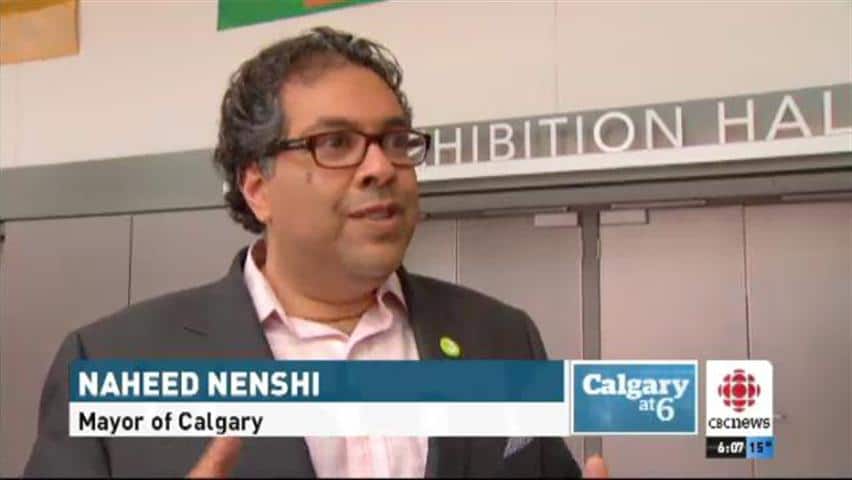 8 years agoVideo
2:10
Mayor Naheed Nenshi and Preston Manninng weigh in on the controversy sparked by a video that appears to show Calgary home builders trying to get their preferred candidates on city council. 2:10

Preston Manning spoke Friday about a controversial video that appears to show Calgary home builders trying to get their preferred candidates on city council.

The secretly-recorded video shows the head of one of Calgary’s biggest home building companies outlining a plan to defeat members of city council who they see as being anti-development.

Part of the plan involved donating money to the Manning Centre to help train fiscally-conservative candidates ahead of the city's fall municipal election.

But Manning said the municipal government program at the centre he founded is not meant to shift the slant of Calgary's city council.

"Calgarians do not want the federal or provincial parties getting involved in municipal politics," he said.

"They want independent candidates who can take ideas from wherever and decide whether they support those or don't support those, and who are accountable ultimately to the voters."

The former Reform Party leader was in Australia when the video surfaced last month.

In the controversial video, which surfaced in April, Shane Homes founder Cal Wenzel suggests that if their side can get eight like-minded members on city council they could thwart Mayor Naheed Nenshi's agenda.

He told the assembled group of industry insiders that after giving the maximum donation to Ward 7 candidate Kevin Taylor, he also provided the use of 13 trucks and helped assemble signs.

"That’s a 'donation in kind' — that means he was donating more than the allowed limit," said Nenshi back in April. "That is a clear violation of even our weak regulations."

But Wenzel also described how his company and 10 others were giving $100,000 each to the Manning Centre.

The Calgary-based Manning Centre announced earlier this year that it will offer a training program for municipal candidates with "market-oriented ideas and principles" through its Municipal Governance Project.

But Ward 13 Ald. Diane Colley-Urquhart said she had the impression after a meeting with a director from the think-tank that she wasn't conservative enough. She said he suggested there might be a candidate for the next municipal election this fall who could do a better job at working with "stakeholders" in her riding.

Dimitri Pantazopoulos, the project director for the Municipal Governance Project, said in an issued statement that the alderman's characterization of the conversation was incorrect, and they left the meeting on very positive terms.

Manning said it was a misunderstanding.

"I don't believe in intimidation as a political tactic, not just this instance but in my involvement in federal politics," he said. "No one who works for us does."

Concerns also arose over donations to the Manning Centre for political advocacy work, with Mayor Nenshi saying its dual status as a charity and a tax exempt non-profit prevents it from accepting such donations.

However, Manning says it's important to clarify the distinct roles of his two organizations — the Manning Foundation and the Manning Centre.

On its website, the Manning Centre says it is a non-profit corporation that focuses on political, conservative-oriented activities and, because it is not a registered charity, donations are not eligible for tax receipts. Activities such as research and education, which is made available to the public, are undertaken by the Manning Foundation — which is a registered charity.

Manning said the more than $1 million donated by Wenzel's group of home builders was split 50/50 between the Manning Foundation and the Manning Centre.

"In our building here we have a donor wall, now that pertains supporting the development of this training centre — that doesn't pertain to the Municipal Governance Project," he said.

"We're following the rules set by [the Canada Revenue Agency]," he said.

Manning says the controversy has not tarnished the reputations of himself or the Manning Centre.

"I think basically it's based in a misunderstanding of how we're set up," Manning said.

Manning said the centre is just starting out, but its goal it is to encourage higher levels of investment and research training for politics at the municipal level, which he says is already happening at the provincial and federal levels.

He said the Municipal Governmence Project isn't confined to Calgary.

"This is not all about [Mayor Nenshi]," Manning said.

"I know the mayor thinks it's all about him but it's not all about him. There's 25,000 of these officials and there's 15 in Calgary and they basically want to get this on to issues."

He said the Manning Foundation is researching the top issues in Calgary, which included the cost of living for the average family, traffic congestion and public safety in a poll taken by the foundation last November of 4,200 Calgarians.

The foundation has plans for another poll just before the fall election to see if the top issues have changed, and the information is posted for public consumption on its website.

While Nenshi said he has been requesting a meeting with Manning for a couple of months, Manning said he has no record of the mayor doing so.