Alberta's premier is brushing off new poll results released earlier this week showing a sharp drop in her popularity.

The only poll that ever mattered was the poll on election day, says Redford 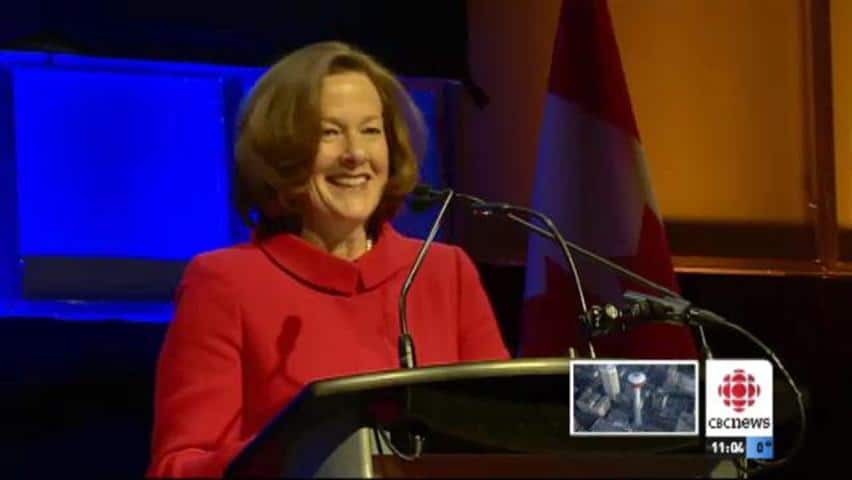 Alberta's premier is brushing off new poll results released earlier this week showing a sharp drop in her popularity.

The poll, conducted by Angus Reid and released earlier this week, showed Alison Redford’s approval rating had dropped by 18 points. Now at 29 per cent, she had been rated at 47 per cent in December 2012.

Redford, however, said the only poll that ever matters is the one on election day.

"I'm paying attention to what people are talking about, the response to the budget, very pleased with what we're seeing," she said from the Leader's Dinner at the Telus Convention Centre in Calgary Thursday, which was packed with more than 1,500 people.

"I'm very proud of the work that caucus and cabinet has done."

She said there are ups and downs in politics and her party is very committed to the path it has set.

The online poll surveyed more than 7,000 Canadians about the performance of the premier in their province.

Redford supporter Ken Faulkner agrees the poll is nothing to worry about.

"I think at the end of the day you look at polls for what they are," he said. "They're day-to-day and week-to-week and issue-to-issue"

"This is, or should be, particularly troublesome for the premier because this is not a regular public opinion poll on party policy or party ideas, this is about trust," he said.

Despite the poll result, it was a party-like atmosphere at the dinner — something the premier hopes spills over to her next leader's dinner in Edmonton May 2.

'Some party that I used to know'

A political science student from the University of Calgary posted a YouTube video mimicking the popular Gotye song Somebody That I Used To Know with a strong message for the current Progressive Conservative government.

Amanda Achtman says the response has been positive for the most part.

"One surprise about having posted the video is that some people say, 'Oh this song it's overdone. That song is so 2012,'" she said. "Well our government is so 1971. The idea is that this has come and gone and that's why the song is a perfect fit."

Achtman says the point of the video is to engage the public in a political conversation.

She says she has no strong partisan affiliation.