A judge has released video from the assault trial of a Calgary police officer who was recently fired for trying to initiate a "predatory" relationship with a young woman as she recovered in hospital after trying to kill herself.

David Pizzolato was fired two weeks ago, which is unrelated to his assault trial

A judge has released video from the assault trial of a Calgary police officer who was recently fired for trying to initiate a "predatory" relationship with a young woman as she recovered in hospital after trying to kill herself.

The two angles show Pizzolato punching a man three times after forcing him to the ground.

The firing and the assault are unrelated.

In March 2016, Pizzolato arrested Darren Ekson, 59, in downtown Calgary for allegedly assaulting a staff member at the Drop-In Centre.

The officer and his partner brought Ekson to the arrest processing unit (APU) downtown.

11 months ago
0:31
This video was shown during Const. David Pizzolato’s assault trial. At issue is whether the punches are considered excessive use of force. 0:31

Videos show Pizzolato bringing the accused into the building where he was to be formally charged and processed.

While Ekson was handcuffed, sitting on a metal bench, he makes a slow kicking motion toward Pizzolato while looking away.

Pizzolato then points at his arrestee and a few seconds later, walks over to him, pushing his head down with one hand and grabbing Ekson's face with his other gloved hand.

The officer forces Eskson to the ground and punches him three times in the side before kneeling on his back. 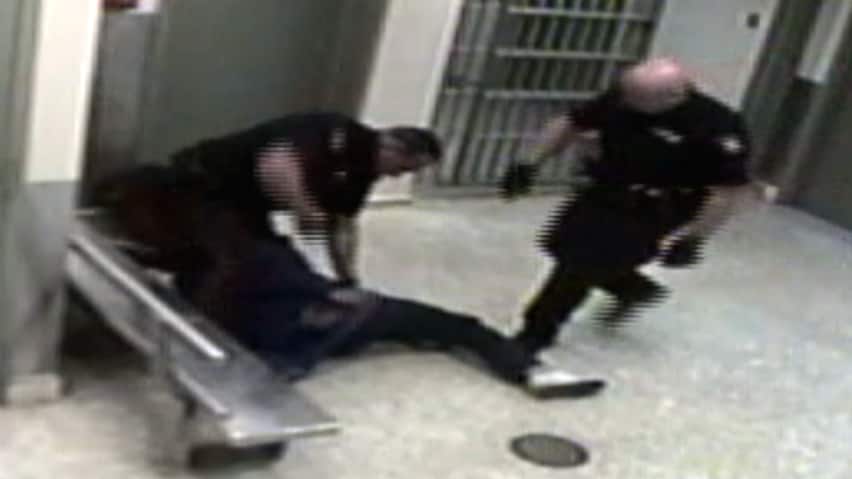 11 months ago
0:29
Const. David ​​​​​​​Pizzolato was fired in October for trying to initiate a “predatory” relationship with a young, vulnerable woman. A decision is expected in December in his unrelated assault trial, during which this video was entered as evidence. 0:29

During the three-day trial, Pizzolato testified that the use of force was justified because Ekson spat at him.

Ekson testified he did not spit at the officer.

Yake will make his decision next month.

Six months after Ekson was arrested, his charges were dismissed.

Although the incident took place in March 2016, Pizzolato wasn't charged for more than two years, until November 2018.

Pizzolato wants his job back

In 2016, Pizzolato tried to start an unwanted and "predatory" relationship with a 22-year-old woman who had just tried to kill herself, sending her up to 100 text messages in four days while she was recovering in hospital.

At the time, Pizzolato was 48 years old.

On the day she was released from hospital, Pizzolato showed up at her home.

Just weeks earlier, Pizzolato's supervisor had warned him to stop contacting women he met while on duty.

Greg Dunn, Pizzolato's lawyer from his disciplinary hearing says he is appealing his dismissal from CPS.