The long awaited, and often controversial, Peace Bridge was opened to the public Saturday afternoon.

$24.5-million bridge was originally scheduled to open 16 months ago 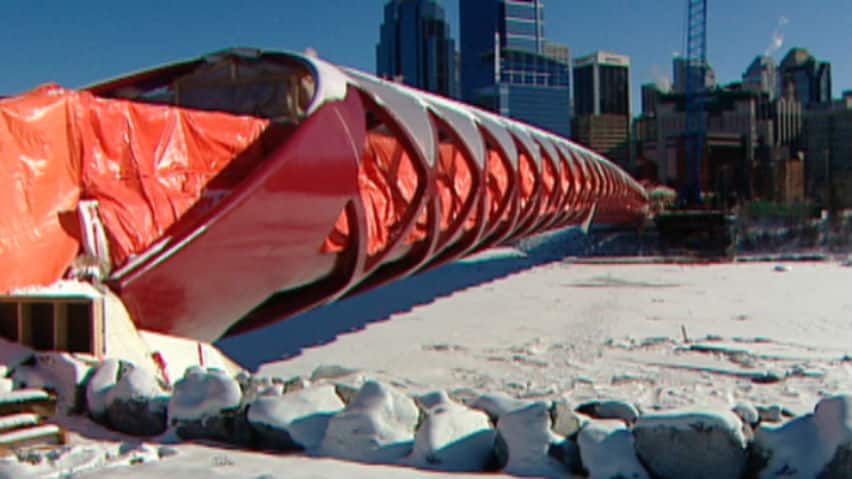 Give Peace a Chance

9 years agoVideo
1:39
One Calgarian created a unique way to celebrate the Peace Bridge opening this weekend. 1:39

More than 1,000 people showed up to mark the occasion —16 months after it was originally scheduled to open.

The party began at 2 p.m. MT at the south end of the bridge with a blessing from a Blackfoot elder and included poetry, a Chinese lion dance, a veterans' parade and music from local entertainers.

The 130-metre helix-like bridge spans the Bow River, connecting the neighbourhoods of Eau Claire and Hillhurst-Sunnyside.

At the ceremony, Mayor Naheed Nenshi thanked former Calgary mayor Dave Bronconnier for his vision of the bridge, which was originally scheduled to open in the fall of 2010.

Nenshi called the structure "a feat of architecture and beauty."

The celebration comes on the heel of tremendous criticism over its unusual design, hefty price tag and a litany of delays.

"We should really celebrate the opening of what is — whether or not you think it’s a good thing or a bad thing, no matter where you stand on the controversy — an iconic and important piece, an indelible piece, to Calgary’s landscape," said Nenshi at the event.

Calatrava’s son Micael was at the event. He said he thought it was funny that so many people compared the bridge to a Chinese finger trap.

"One could see it that way," said Calatrava.

"I love that idea. Especially with the Chinese finger traps, some of them have different colours, and this one has a little bit of red and a little bit of white, the white being from the glass."

Liz Seale was with a group of 45 cyclists from the Elbow Valley Cycle Club who participated in the first march.

"I think there's been enough grumbling about it now. Now it's time to just enjoy it. I think it's going to be fun to go across it. It's a beautiful bridge."

Weigh in on our online poll and see what people were saying on Twitter by searching #celebridge.