U.S. President Barack Obama says it's "not contradictory" for Canada to continue extracting bitumen from Alberta's oilsands while also working as a global partner in transitioning away from fossil fuels.

'No apologies' for producing oil but long-term shift needed to 'preserve this planet,' U.S. president says 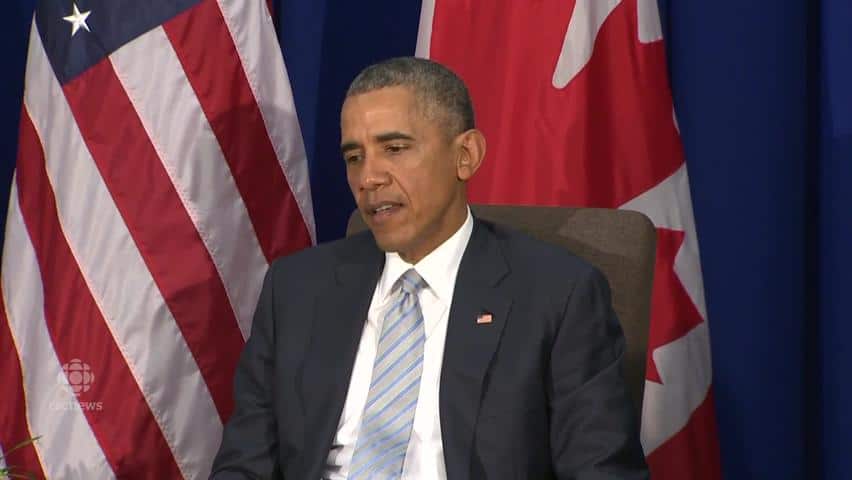 5 years ago
3:13
US President asked if Alberta oil sands bitumen should remain in the ground 3:13

U.S. President Barack Obama says it's "not contradictory" for Canada to continue extracting bitumen from Alberta's oilsands while also working as a global partner in transitioning away from fossil fuels.

"My view has been that we have to transition," Obama said during a joint press conference with Prime Minister Justin Trudeau at the Asia-Pacific Economic Cooperation (APEC) Summit in Manila.

"That transition does not happen overnight."

"Both of us are large oil and gas producers and that's an important part of our economy," Obama continued.

"We make no apologies for that but I also think that we have to recognize that if we want to preserve this planet for our kids and our grandkids, then we're going to have to shift increasingly away from carbon-emitting energy sources."

Trudeau, for his part, said Canada had earned an international reputation for not taking climate change seriously and that's something he intends to change.

The prime minister said one of his "first tasks" on the issue will be to "reassure Canadians and others that we are serious about meeting reduction targets, about being positive actors on the world stage in the fight against climate change, and demonstrating a future in renewables and smart investments around energy."

The U.S. president also acknowledged the economic woes Alberta is currently facing and noted the reality of oil production and the move toward alternative energy sources will be "dictated by market prices."

"Right now in Alberta, a lot of the issues with respect to how to extract oil does have to do with the fact that oil prices are low and they're going to be low, I suspect, for a while," Obama said. "That actually presents both our countries an opportunity."

Now is the time for energy companies to look seriously at diversifying their business models, the president said, and for consumers to use any savings in their fuel bills to invest in things like solar panels for their homes.

"This is going to be a messy, bumpy process worldwide," Obama said.

"But I am confident that we can get it done and the fact that we now have a very strong partner in Canada to help set up some global rules around how we approach this will be extraordinarily helpful."