Mayor Naheed Nenshi slammed the provincial government again today for its handling of Bill 10 legislation during his speech to the Calgary Chamber of Commerce.

'This damaging and hateful debate does nothing but reinforce negative stereotypes' 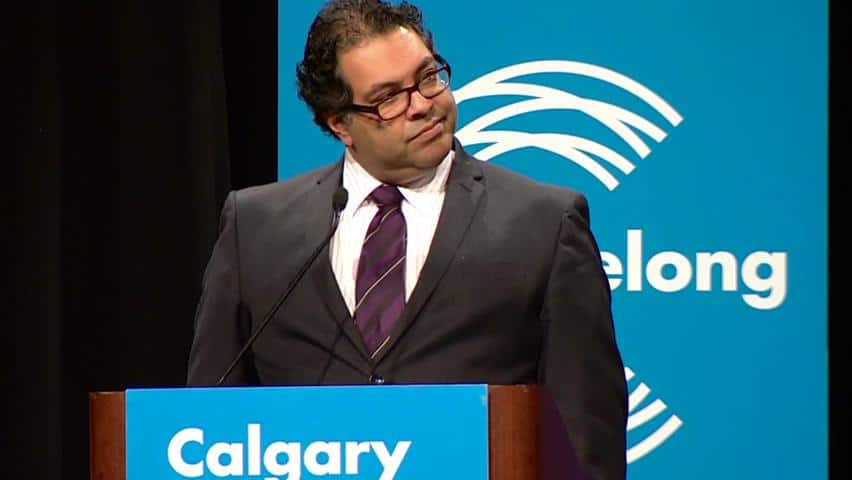 6 years ago
5:13
Mayor Naheed Nenshi slammed the provincial government again today for its handling of Bill 10 legislation during his speech the Calgary Chamber of Commerce. 5:13

Calgary Mayor Naheed Nenshi is slamming the provincial government for its handling of Bill 10 legislation dealing with gay-straight alliances in schools.

It's not the first time he has spoken out on the issue, but it became a big part of his speech to the Calgary Chamber of Commerce Thursday afternoon.

He was speaking to the crowd about the state of business in Calgary, saying there is room to be more inclusive.

"This damaging and hateful debate does nothing but reinforce negative stereotypes," said Nenshi.

The bill came under fire for not making it mandatory for school boards to allow GSAs when requested by a student, instead leaving it up to students to seek legal action if their request for a GSA is denied.

In response to widespread opposition, the Tories introduced an amendment stating the education minister would intervene if a school board refused to allow a GSA.

He wonders why an issue about a school club would dominate the legislature for two weeks when MLAs could have been talking about more meaningful topics, such as education or the oil price crash.

Nenshi called the debate over gay-straight alliances in schools dangerous. He says it has fuelled the stereotype that Albertans are "hillbillies."

"Absolutely, I was getting all kinds of feedback from people across the country about what kind of a place do you live in where you are having this type of discussion in public," he said.

Nenshi did say one good thing about Premier Jim Prentice by thanking him for finally putting the bill on hold.

With files from CBC's Kyle Bakx