Calgary city council this week voted to condemn Quebec's religious symbols law, Bill 21. Here's a Q&A with the mayor on why that's a good start.

Bill 21 bars certain civil servants from wearing religious symbols at work. Critics have accused the law of undermining religious freedom and singling out minorities, although it remains broadly popular in Quebec. Calgary Mayor Naheed Nenshi has said the law targets some people — particularly Muslim women who wear the hijab — and not others.

In this Q&A with Mayor Nenshi, he talks about why he thinks the Calgary resolution is only a good first step in challenging the law.

This interview has been edited and paraphrased for clarity and length. You can WATCH the complete interview here.

A: Why is this issue important to you?

Q: It's a question of fundamental human rights.

I was in New York last week and I was saying to people at some international meetings, "Name a country in which there is a law that says you have to choose between your faith and your job, a law that restricts people from certain religions from having certain jobs in the public service."

When I said Canada, they were shocked. They said, "Canada is supposed to be a paragon of pluralism, what is going on here?"

For me, I have been really surprised at the lack of conversation around Bill 21 and what it really means.

It's terrifying. It is flagrantly unconstitutional. It's violating the Charter of Rights and Freedoms in a really, really transparent way, and because of the notwithstanding clause, it is in some ways protected from legal challenge.

I was thrilled when the first question each of the party leaders got, when the federal election campaign was kicked off, was about Bill 21. And I was surprised when every one of them mouthed platitudes about human rights and dignity but were then very forceful that they are not going to do anything about it.

We deserve better from our federal leaders, and this is a good time for us to have that discussion.

Q: What would you like to hear from federal leaders?

A: To be fair, three of them have the same script, "We are not going to do anything."

Mr. Trudeau was slightly different, "We are not going to do anything, right now."

But really what I want to hear is a more forceful defence, because there are things the federal government can do. It is not just court challenges.

The federal government has the constitutional right to disallow provincial legislation. It is very rarely used, but they could do it.

They could do what the United States federal government did when certain states were being recalcitrant on civil rights legislation, which is withhold federal funding.

So there really are things they can do and they are too scared to do it. So it is time for Canadians to give them some courage.

Q: Will the Calgary motion make a difference?

A: Every little drop helps fill the puddle.

I was really proud of my city council. It would have been easy for them to say, "It is not our jurisdiction, we have to worry about the garbage collection," and we do.

At city council, we disagree on some things. The fact that they did that unanimously was a really strong signal.

I thought it was helpful that they said, "Not only are we going to do it, we are going to encourage every other city to do it."

That's the critical part of this. We have to create a groundswell of Canadians who are speaking out for basic decency.

Q: In the spring, you didn't support the mayor of Montreal, who was against this bill. Why didn't you?

A: We were having a sidebar conversation and I said, "Hey, how are you doing with all this Bill 21 stuff?"

She said, "We are fighting it hard, but sometimes I feel isolated in this conversation."

I wish I had gone back into that meeting of mayors, pounded my fist on the table and said, "Guys, we have to support Mayor [Valérie] Plante, and we have got to make a statement today."

I regret not doing that. It's not too late. I am calling on all municipalities to speak out against this.

Bill 21 is also an extraordinary encroachment by a provincial government on municipal rights. They are telling cities who they can and cannot hire. That's ridiculous.

Ultimately, the change has to happen with the federal government. If you want to be prime minister, you need to say how you are going to safeguard everyone's human rights. 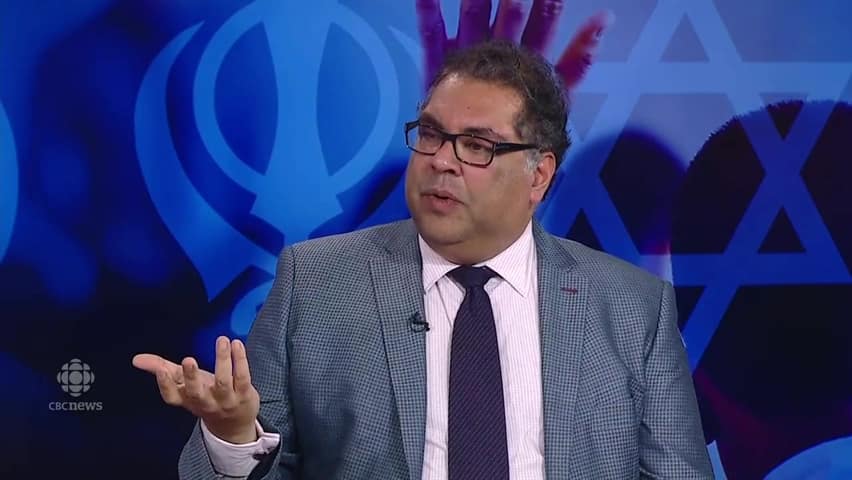