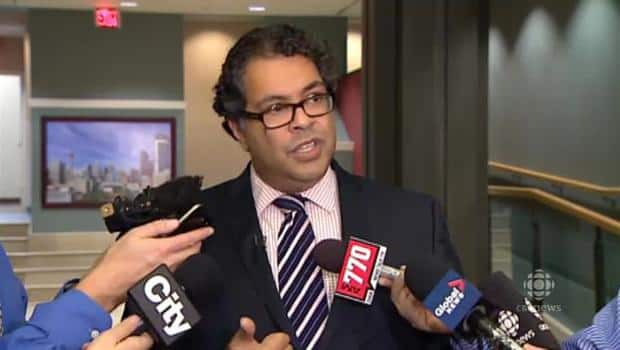 The Shane Homes founder filed the $6 million defamation lawsuit last week, but Nenshi had not been served with notice.

The mayor told media this afternoon he received the papers at 1:30 p.m. MT.

"This is going to kick off a process that will take many, many, many weeks, months, perhaps years," said Nenshi.

He said the next step for him is to file a statement of defence.

It's still unknown who will pay for Nenshi's legal fees in the case.

"The city solicitor at some point in the next months will make a decision on indemnification," said Nenshi.

"We have to do this every single time an employee of the city gets sued for anything, and that happens hundreds of times a year. So they'll look carefully at the statement of claim, the pleadings."

If the solicitor makes the decision that the city will not pay for the fees, then — at the end of the legal process — Nenshi says he could also apply to council for legal fee reimbursement, but has no plans to do so "at this time."

"The actual decision to do that is probably years away," said Nenshi.

He called the lawsuit "disappointing," saying it is aimed at discouraging public discourse.

"I believe this to be, in my opinion, an example of what's sometimes called a 'SLAPP,' a Strategic Lawsuit Against Public Participation."

In the suit, Wenzel alleges that the mayor insinuated he broke election laws and runs a mafia-like organization.

In an Oct. 9 Calgary Eyeopener interview on CBC Radio, Nenshi said a video of a private home builders meeting was like a scene "out of the movie [The] Godfather."

Wenzel says those remarks are untrue and have damaged his reputation. None of the allegations in the lawsuit has been proven.