A new attraction has opened in Banff National Park that lets total novices scale a peak like true mountaineers. 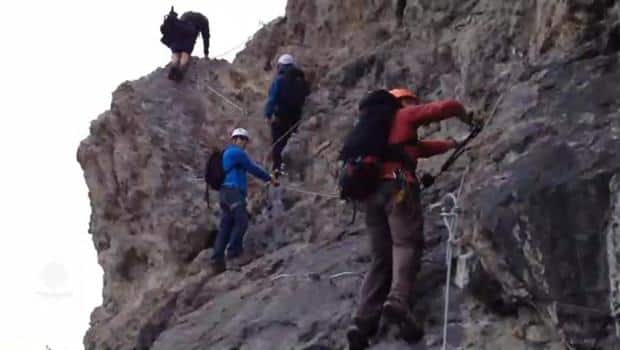 A new attraction has opened in Banff National Park that lets total novices scale a peak like true mountaineers.

Mount Norquay’s via ferrata — Italian for iron road — features two routes in the mountain’s cliffs high above the town of Banff.

Led by certified guides, climbers head up pitches and with the help of a fixed anchoring system of cables, ladders and a suspension bridge.

“You could pretty much hang a bus off of them. So I would say they are good for a hundred years plus,” said general manager Andre Quenneville.

Just about anyone can do the climbs, he said.

"Folks like myself, I didn't have a climbing background and to think I can climb to the top of a mountain now is pretty amazing,” he said.

“So anyone who has that urge to get to the top of a mountain on their own, it’s a great new activity to get you up there."

With files from the CBC's Kyle Bakx