Watch these photographers show off a handmade, ultra large-format camera

It takes photographers Shane Arsenault and Natalia Barberis hours to shoot and develop a single photo using their latest ultra large-format camera build — and they like it that way. 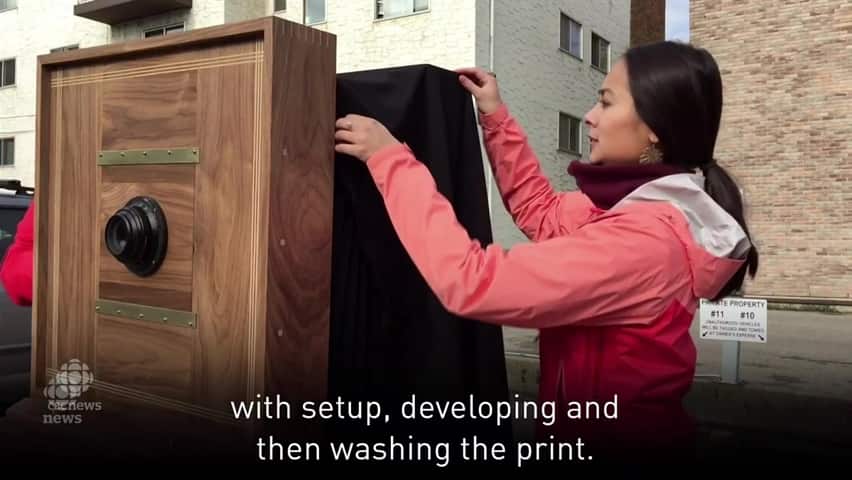 2 years ago
1:19
Photographers show off a handmade, ultra large-format camera 1:19

It takes photographers Shane Arsenault and Natalia Barberis hours to shoot and develop a single photo using their latest ultra large-format camera build — and they like it that way.

The couple has worked together since 2016 to take their passion for high-quality analog photography out of the confines of a studio and on the road with their Mobile Darkroom.

It's a lot slower

"We've committed to doing this to step back from the digital age," she said. "With digital photography, you're taking hundreds of pictures at a time and then scrolling through them and deciding which one is your favorite one. With this process, it's a lot slower."

The hand-crafted camera looks like a wooden box. It's constructed out of walnut and maple, weighs in at more than 200 pounds (91 kg) and took just over five months to build.

But a look at the scissor-lift, the tilting action and the etchings on the old-school camera's body makes one thing obvious: the couple behind the Mobile Darkroom have an eye for detail.

"If you sort of think about the cameras that you used to use back in the 1800s, where you go underneath the big hood, look through the camera that way, we've built cameras just like that," said Arsenault.

He's the photographer and woodworker who crafted the 20-by-20-inch camera.

"Over the years of just sort of experimenting, how to make things, I was able to learn different joinery and how to sort of assemble things in a more professional and cleaner way," he said. "We were able to take these ideas and apply them to this camera."

Wheeling it out into their Sunnyside alleyway, several passersby stopped to ask the artists what their contraption was, and why they built it.

Part of the appeal, Barberis said, is that the large-format camera can't take 300 photos in a day as a digital camera could. It's a process.

She said one shot can take more than two hours to capture when you account for setting up the camera, developing and washing the prints on site and then cleaning up after the shoot is done.

"After hours of shooting and struggling with the camera, or lifting the darkroom, that sort of stuff, it feels really good and very rewarding to see your final prints," Barberis said. "It's always exciting to open the door, and with the light see it for the first time."

A history of building beastly cameras

Arsenault and Barberis started their joint photography project in December of 2015 when they had a dream.

Arsenault had already built a large-format bellows camera capable of taking 16x20 images, but it only had the capacity to load single shots, and the couple wanted to capture images of the Alberta Landscape.

So, they created the Mobile Darkroom. This way, they were able to capture images on the road and develop them onsite.

The dream was finally turned into reality — after five months of construction — in May 2016, when the Mobile Darkroom was ready for its maiden voyage to Drumheller.

What followed was an adventure of trial and error and carefully planned photo shoots until the pair had their exhibition at Loft 704 Photo Studio in Calgary as part of the Alberta Exposure Photography Festival in February 2018.

And with their latest creation, they are hoping to go on another trip, and more photo shoots.

For now, they drive around Calgary to take pictures because they are saving up for their next photo adventure.

Arsenault and Barberis have a show coming up in January at the Illingworth Kerr Gallery.