A colourful igloo built using 600 milk cartons is warming hearts and bringing neighbours together in a northeast Calgary community.

Lack of snow required the 'borrowing' of construction materials from neighbours 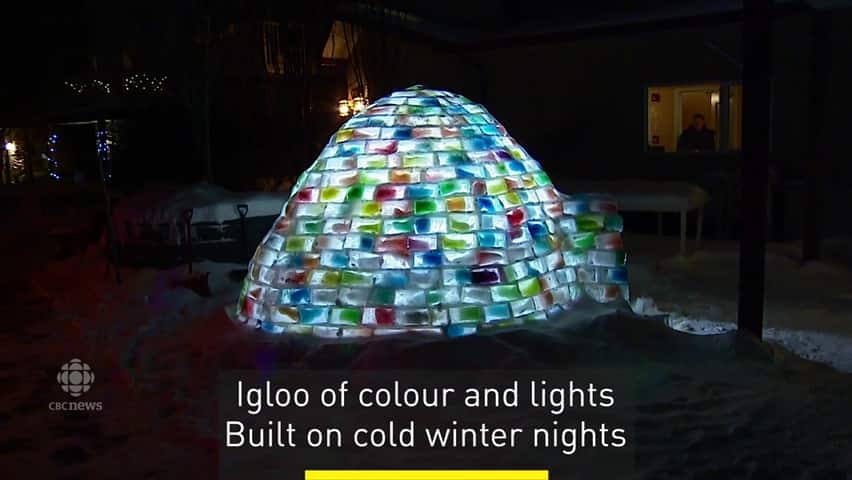 A colourful igloo built using 600 milk cartons is warming hearts and bringing neighbours together in a northeast Calgary community.

One of the organizers says it's been a labour of love, in the works for years.

"We saved enough by last year to do it, but last year it wasn't cold enough. We saved more than 600 milk cartons. We stored them in the parkade. It was a very important project."

Amell says he has a group of neighbours that just like hanging out together and this project looked like the perfect fit.

"We always look for things like this," he said with pride.

"We do cross-country skiing together, canoeing, we like to do stuff together so this seemed like a slightly outside-the-box, interesting thing to do. There are probably a dozen people involved — most of whom live here — in building this thing."

Timing and weather were critical factors in the construction process.

"This year we were probably the only Calgarians that were delighted that it turned to the minus-twenties in early December because we said, 'Hey, time for the ice house,'" Amell explained.

"We had to make mortar out of snow and pour some water on it and you had just a couple of minutes before it would freeze solid to use that as a mortar to stick these together. My job was to hold them in place while they were freezing. It was a little cool."

In early December, there wasn't a lot of snow on the ground so they had to "borrow" some of the construction materials.

Amell said there were at least two main takeaways from the project.

"When you do a group project together, this person is going to do this task, and then another person is going to quickly move in and do something else. That is exactly why we do this sort of thing. The fun of taking on a new challenge together and figuring out how to line up all the pieces."

The milk cartons which acted as moulds served double duty, he explained with a wink. It turns out, even torn, you can still get your deposit back.

"This was a nice surprise," Amell said.

"The refunds were good enough to buy a really good bottle of scotch for our house-warming party."