Two Alberta parents accused of letting their toddler die of bacterial meningitis have been convicted of failing to provide him with the necessaries of life.

David and Collet Stephan failed to provide Ezekiel with the necessaries of life, jury finds 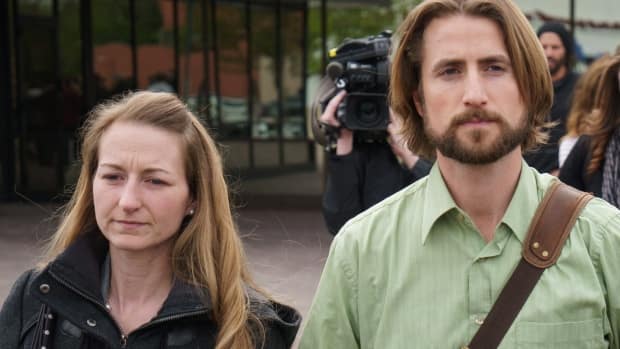 5 years agoVideo
1:42
David and Collet Stephan found guilty of failing to provide the necessaries of life in the death of their 19-month-old son 1:42

A packed Lethbridge, Alta., courtroom erupted with emotion on Tuesday afternoon, after two parents accused of letting their son die from bacterial meningitis were found guilty.

David Stephan, 32, and Collet Stephan, 36, were charged a year after their nearly 19-month-old son Ezekiel died in March 2012, under Section 215 of the Criminal Code which deals with "failing to provide the necessaries of life."

There was a gasp in the courtroom as the decision from the four-man, eight-woman jury came down. People in the courtroom's gallery started to cry and Collet Stephan broke out sobbing uncontrollably while her husband and others rubbed her back.

The Stephans will not be held in custody at this time, but will have to return to court on June 13 when the date for sentencing will be set.

The maximum penalty for failing to provide the necessaries of life is five years in prison.

Shannon Prithipaul, the past president of the Criminal Trial Lawyers Association, thinks it would be unlikely for the couple to receive "something close to the maximum."

"It's not like they were not feeding their child or they were purposely withholding medication that they knew would assist the child but didn't," she said.

The Crown asked that the Stephans be forced to surrender their passports while free, but the judge refused the request.

Lisa Weich, the prosecutor, said this case was "incredibly sad."

"What we hope that the public and the community takes away from this particular trial and the verdict in this trial is that all parents are held to a minimum standard of care that all children should expect at all times," she said.

Weich pointed out the case did not centre on the connection between the parents and Ezekiel.

"They definitely, definitely loved their son, but as stated in our closing argument and even in our opening arguments, unfortunately, sometimes love just isn't enough," she said. "Parents still have to follow the standard of care that is set by the criminal law."

The couple — who lived on an acreage in Cardston County, in the southwestern corner of Alberta at the time — testified they believed Ezekiel had croup or flu.

They treated him for 2½ weeks with remedies that included hot peppers, garlic, onions and horseradish and a product from a naturopathic doctor aimed at boosting his immune system.

He eventually stopped breathing, prompting the couple to call 911.

Ezekiel was rushed to the hospital in Cardston before being taken to the emergency room in Lethbridge and later flown to Alberta Children's Hospital in Calgary.

He was diagnosed with bacterial meningitis and neurological dysfunction, according to the official death report by Dr. Jonathan Gamble.

Ezekiel was declared brain dead on March 18 and he was taken off life-support.

With files from The Canadian Press and CBC's Kate Adach