Medical cannabis growers say landlords need to do more to educate themselves as more people become licenced to grow plants at home.

Under new federal rules, landlords don't have the right to know a tenant is growing marijuana in their home

The gentle hum of whirring fans and the unmistakable smell of fresh cannabis drift through a garage at the back of a house on a quiet Calgary street.

It's legal but the woman behind the small grow-op is keeping things under wraps. She's new here, on a month-to-month lease and — like many licensed home growers — she's worried about the consequences of her landlord finding out. 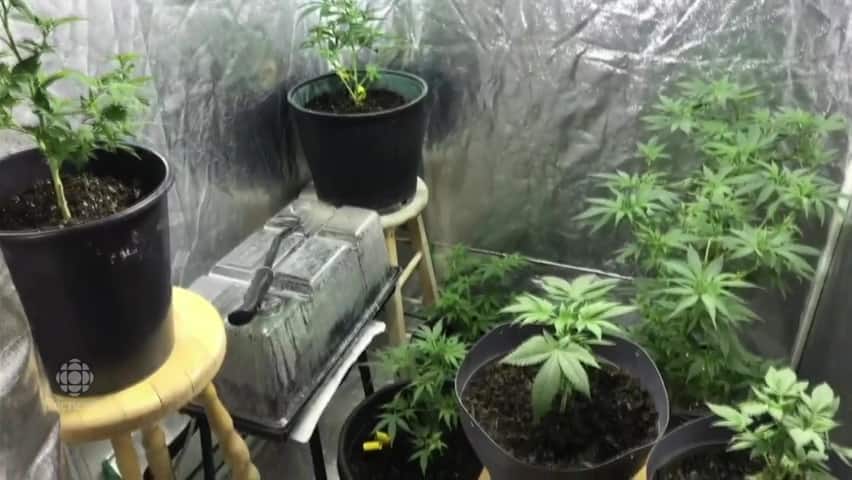 3 years ago
0:48
The gentle hum of whirring fans and the unmistakable smell of fresh cannabis drift through a garage at the back of a house on a quiet Calgary street. 0:48

"It can be pretty scary. What if everybody finds out?" said the woman, whom CBC News has agreed not to name.

Three years ago she was diagnosed with severe fibromyalgia and told she has a tumour on her spinal cord, leaving her with nerve pain and unable to work. She's one of many Canadians who turned to growing their own cannabis for relief.

"We need to take the fear out of this. If more landlords were told about how these things really work, there wouldn't be such a big deal about it," she said.

"Educate, educate — get them into seminars, workshops, get people together and teach them what it's really about, what they really need to know about this because I think they're really just running off fear," she continued, adding that growers also have a role to play in improving relationships.

"We need to take landlords concerns seriously, too, this is their home, have some respect. Do it responsibly and set things up properly."

Under new federal rules implemented last August, landlords don't have the right to know that a tenant is growing cannabis in their home.

Patients can grow different amounts depending on their individual prescriptions. Someone with a three-gram-per-day licence may grow up to 15 indoor plants, for example.

More than 30,000 people in Canada have permits to cultivate cannabis for medical use. That number is growing all the time, and full legalization expected next summer, when all Canadians will be able to grow up to four plants at home.

'No grow' clauses offer no guarantees

Landlords are mostly worried about damage to their properties resulting from things like mould and condensation, more commonly associated with big illegal grow-ops.

But there's little legal recourse for landlords who don't like the idea of their tenant growing medical cannabis plants, on any scale, according to a lawyer who works with landlords and the Calgary Residential Rental Association.

"I know that some landlords are including clauses in their new leases that you're not allowed to grow marijuana", said Christopher Souster.

"I struggle with it from a legal perspective. I don't know of any court that has made a determination on the issue and as to whether or not that clause would be enforceable. There's certainly nothing that speaks to it currently in the Residential Tenancy Act," he said.

"I think open dialogue and education is good in all things, but I think it could have some impact and might allay some concerns between landlord and tenant," he added.

The strong smells associated with growing and smoking cannabis in a property, impacting other residents, may make for a stronger case for terminating a tenancy than a grow-op itself, according to Souster.

There are serious insurance implications for landlords to consider, too.

Insurance companies consider growing cannabis as a high-risk activity and they won't insure against it. Companies are worried that grows increase risks around water damage, mould, fire, vandalism and burglary.

Some landlords have even had their insurance cancelled when they've made companies aware that cannabis is being grown in a property.

But insurance that covers cannabis cultivation might not be far away, hints the Insurance Bureau of Canada.

"Insurers are always looking at new trends in the marketplace and some may begin to offer products based on those trends," said bureau spokesperson Andrew McGrath.

"Take for instance Uber or Airbnb. Even as little as a year ago it was tough to find coverage for these. Now, most major insurers offer some sort of product that provides coverage," he said.

The City of Calgary has a close eye on legal grows, too. Safety of home grow-ops is a big concern but the city says it has its hands tied when it comes to inspecting them.

"The limiting factor is that Health Canada doesn't divulge information as to the locations of legal med grows," said Wayne Brown, co-ordinator of the City of Calgary's safety response unit.

The city investigates only when a complaint is made and they can access a property. Some large legal grows can still cause damage to properties, depending on how many plants are being grown inside and the methods being used to grow them.

"We have done around 80 inspections of legal medical grows in the last four years," said Brown. "At times damage has been considerable and there have been 26 Alberta Health Services orders written."

The city admits it also finds instances where medical grows are deemed safe and pose no risk at all.

Souster says he is working with the Calgary Residential Rental Association to set up a special seminar later this year for landlords to learn more about cannabis grows and renters who hold medical licences.