A former Calgary university student, who broke into a professor's home while naked and high on magic mushrooms and beat her badly with a broom handle, has been acquitted — with his case, a prosecutor says, likely the only successful defence of extreme intoxication related to magic mushrooms.

Matthew Brown intoxicated to point of automatism when he attacked Janet Hamnett in her Calgary home: judge

A former Calgary university student who broke into a professor's home while naked and high on magic mushrooms, beating her badly with a broom handle, has been acquitted with the judge finding that he was intoxicated to the point of automatism.

The judge found Matthew Brown was experiencing delirium and not in control of his actions when he broke into Janet Hamnett's home in January 2018.

With Brown's acquittal on charges of assault with a weapon and break-and-enter, the case is likely the only one in Canada involving a successful defence of extreme intoxication while on magic mushrooms, said prosecutor Matthew Block, who did considerable research ahead of the trial.

Brown was a student at Mount Royal University (MRU) at the time and had captained its hockey team for several years, while Hamnett is a public relations professor there — which police said was a coincidence.

Defence lawyer Sean Fagan said this case and his client were unique.

"It stood out in the fact that Matthew Brown is such a kind, non-violent man of integrity and character and for him to be charged with these offences, which were so uncharacteristic for him, he was a pleasure to defend."

Outside the courthouse, Brown reiterated an apology to his victims. 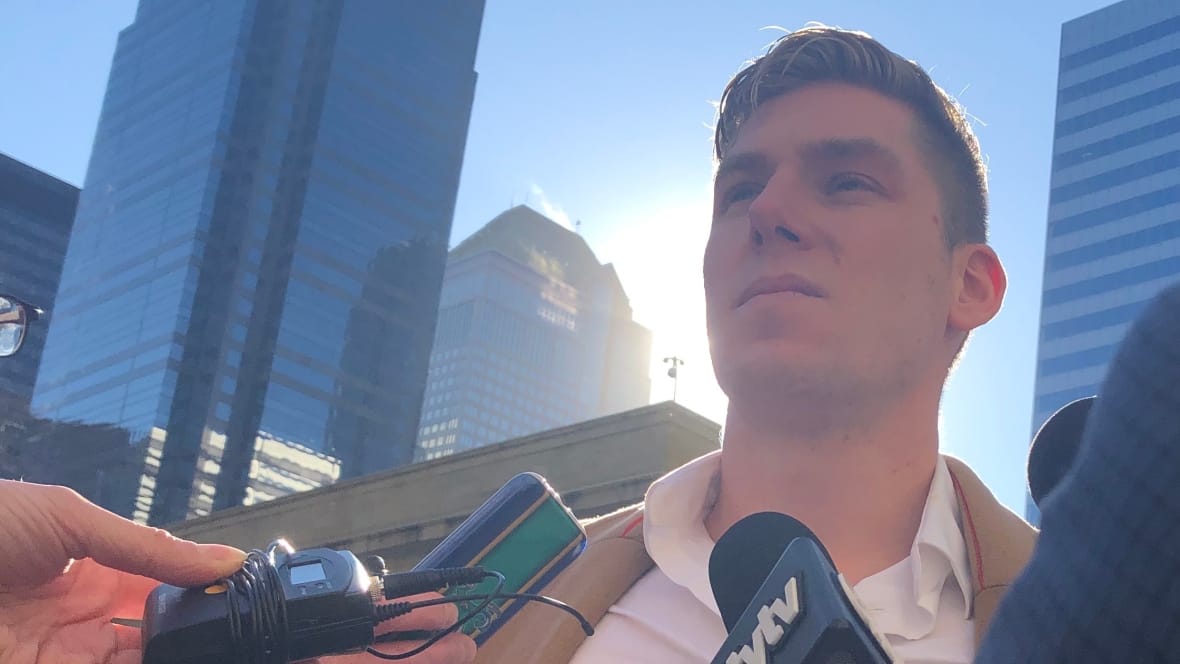 11 months agoVideo
0:12
Matthew Brown, who attacked a woman while on magic mushrooms, says he's very remorseful for his actions despite being found not guilty of assault with a weapon and break-and-enter. 0:12

"When I issued that apology during the trial, it came from my heart, and I meant it," said the now 29-year-old man.

'We did want accountability'

But Hamnett's family is torn.

"We didn't want him to be severely punished, but we did want accountability," said Lara Unsworth, Hamnett's daughter.

"We wanted a lesson shared with society that it's not OK to get that out of control and to hurt people."

"The person he is and how badly he feels has nothing to do with our disappointment; it's the actions he took and that he's not being held accountable for that, and I think they're two separate things." 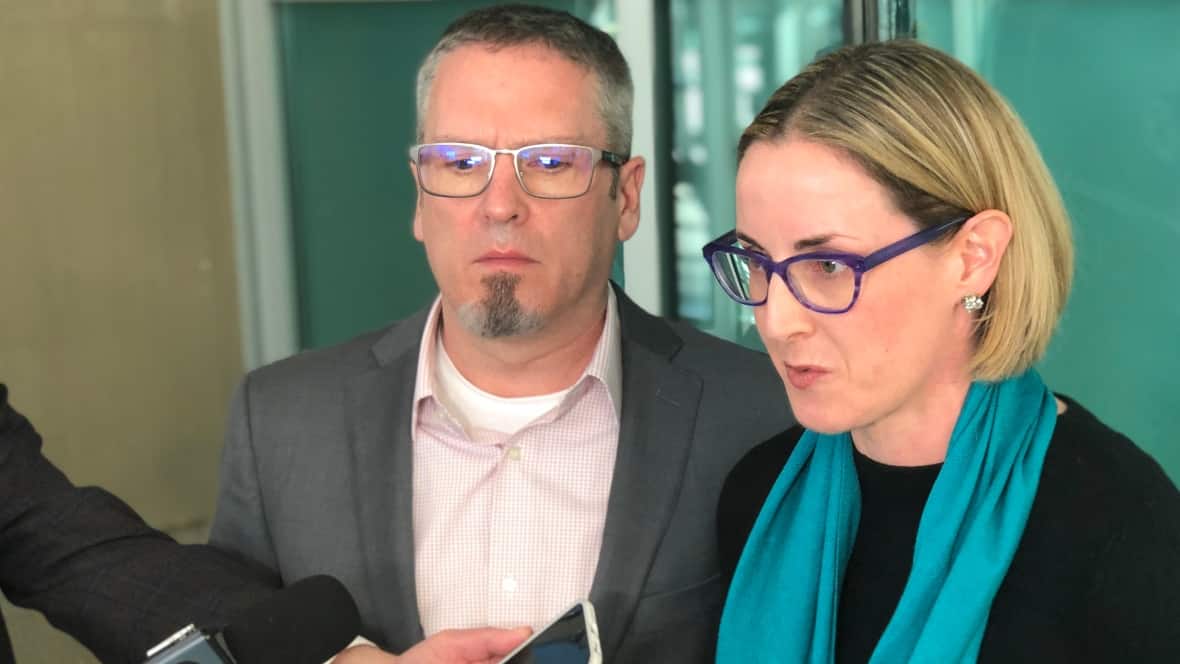 Brown grew up in Truro, N.S., playing in the Quebec Major Junior Hockey League before moving to Calgary to study and play for MRU's team.

In January 2018, he was drinking with some friends in the southwest community of Springbank Hill, near the victim's home.

The friends began taking magic mushrooms. Brown estimated that, over the course of the night, he went back to the sandwich bag of drugs several times, consuming about 2.5 grams.

Brown said he'd done magic mushrooms once before and had a positive experience.

A friend of Brown's, Claire Erickson, testified that Brown didn't seem to be himself that night. Usually the life of the party, he became introverted, quiet and restless. He went to bed twice only to get up and rejoin the group.

Around 3:45 a.m., the group noticed Brown was standing at the front door, naked. Then, he ran out the door.

The friends got bundled up and went looking for Brown, calling 911 as they searched the neighbourhood.

At about 4 a.m., Hamnett — who lived alone — was woken out of a deep sleep to a loud noise followed by a "horrendous explosion," she testified during the trial.

She got out of bed and put on her glasses with the intention of investigating the noise but didn't make it out of the bedroom before a "huge presence" began his attack.

Hamnett said she was thinking, "Please God, let it stop" as she was hit over and over again. Investigators later found a broken broom handle in the victim's home.

"It felt like it went on forever," Hamnett testified. She dropped to her knees and put her hands up to protect her head.

Suddenly, the violence stopped. As the man walked away from her, she scurried into her bathroom and locked the door.

"I realized it was coming from me," she said. "I had huge gashes all over me that were spurting blood."

Hamnett said she was shaking in terror but knew she had to escape.

When she could no longer hear the man walking around her home, she cracked open the bathroom door.

She could see her sliding glass doors had been smashed. In her bathrobe and slippers, Hamnett made a run for it.

'You saved my life'

Once at her neighbours, Hamnett pounded on their door and rang the bell over and over until they woke up and opened the door.

"You saved my life," she told them. "I fell apart at that point."

Hamnett's neighbour Michael Crone testified he woke up to hear his doorbell ringing "about 100 times."

He found his "extremely traumatized" neighbour standing at his door in her robe, her hands wrapped in bloody towels.

While his wife called 911, Crone went outside. Crone spotted a naked man rummaging through a neighbour's car.

He took several photos before the man ran away.

'I am changed forever'

Brown then broke into Prat Varshney's home. When police and paramedics arrived they found him on the floor of the Varshneys bathroom and arrested him.

Hamnett was taken to hospital. She had broken bones in one of her hands and both were extremely swollen, cut and bruised. 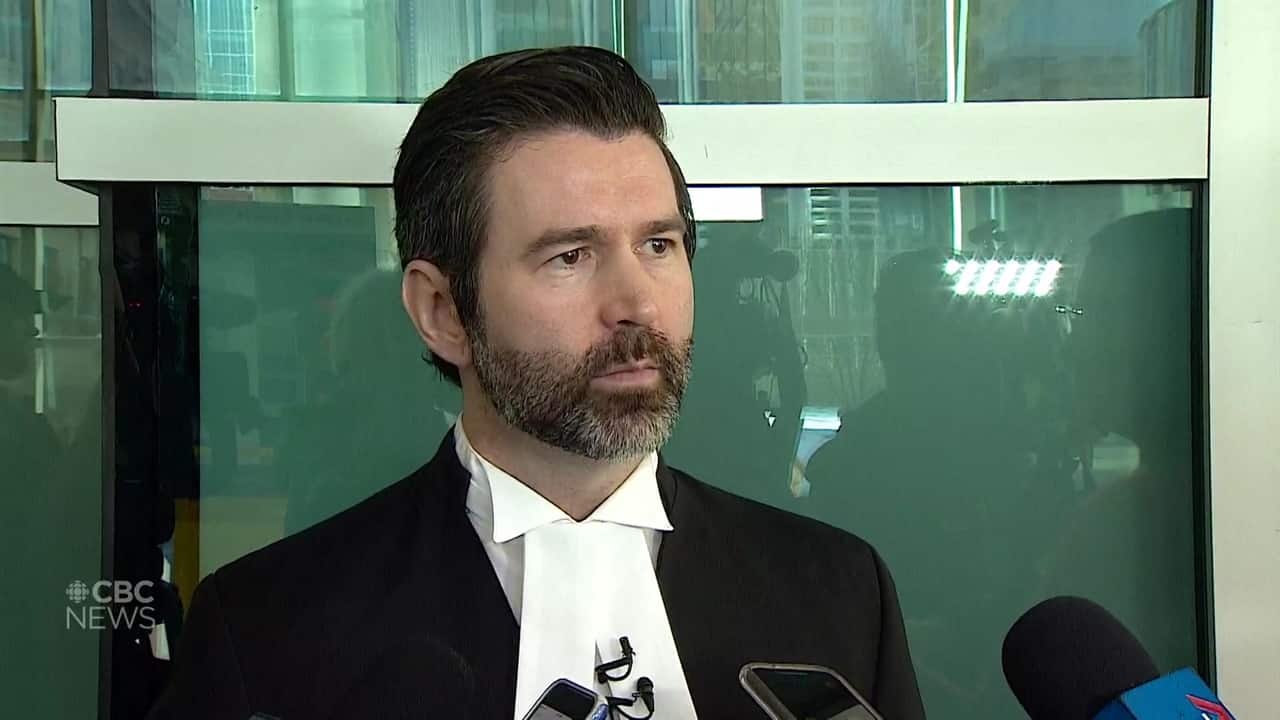 11 months agoVideo
0:31
Prosecutor Matthew Block says this might be the only one in Canada involving a successful defence of extreme intoxication while on magic mushrooms, but he feels it's unlikely it will become a common defence. 0:31

She was left with a permanent disability in her right hand with stiffness, reduced movement and reduced strength.

Hamnett said getting back to teaching at MRU was an "enormous achievement."

"I will never be the same person that I was before this happened," said Hamnett. "I am changed forever. I am anxious. I fret more. I worry more. It is always with me in some way."

'The law is not going to hold anyone accountable'

Following a hearing held ahead of the trial, defence lawyer Fagan said his client "did not voluntarily commit these offences" and was allowed to put forward a defence of extreme intoxication to the point of automatism.

During the trial, a doctor who specializes in forensic toxicology said Brown had likely experienced an episode of delirium where he was unaware of his surroundings and may have suffered delusions and hallucinations.

Justice Hollins said she believed the testimony of every witness in the case and that "every material piece of evidence in this case supported a defence of automatism."

The judge could not find Brown had the intent necessary to be convicted of the crimes and said he had "no motive whatsoever to break into [the victims'] homes or to hurt them."

"The facts of this case are very difficult," said Hollins, acknowledging Hamnett and the Varshneys both had "awful" and life-changing experiences.

"It is difficult to tell them the law is not going to hold anyone accountable for that."