'I'm not as bad a person as I thought': Horse therapy helps LGBTQ youth find their safe place

A southern Alberta program that brings LGBTQ youth and horses together is helping struggling teens build self-confidence in a judgment-free environment. 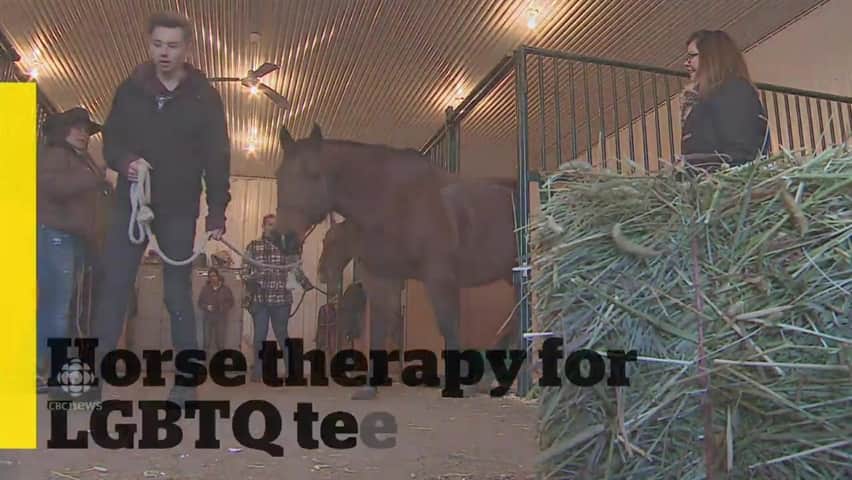 3 years agoVideo
3:56
A southern Alberta program that brings LGBTQ youth and horses together is helping struggling teens build self-confidence in a judgment-free environment. 3:56

A southern Alberta program that brings LGBTQ youth and horses together is helping struggling teens build self-confidence in a judgment-free environment.

"Everybody needs a safe space, regardless if you are LGBTQ or not," Rylan Kennedy tells CBC News.

He's a queer teen who came out to his parents about a year ago.

"You need somewhere that you can go and feel safe and good about yourself — somewhere where nobody will judge you, or make you feel worse than you already do."

And a program that connects horses with kids like Kennedy is serving just that function.

"Horses offer us a really unique opportunity to learn about ourselves, to gain some personal awareness and insight, to grow and develop on an emotional level," explains Jules Rainforth of Rein Forth Equine, a ranch near Carstairs, about 70 kilometres north of Calgary.

"Animals are easier to trust and we are drawn to them. Horses have a way of making us just feel accepted. People come to find a place to be accepted, where they can be met with no judgment, no preconceived notions, no expectations, just as we are and in the moment."

Kennedy, who has lived mostly in smaller communities, says he was terrified at the idea of coming out.

"I struggled with depression for a year and a half because I was suppressing so many of my emotions. When I came out to people, and some people didn't take it well, my mental health suffered from it," he said.

Last October, he found the courage.

"I wrote my parents a note and I left it on the counter before I went to school and when I came home, my parents were at work, and they had written me back a note and put it on my desk and said that it was totally cool and that they were OK with it and stuff."

Another gay teen, Cheyenne Huggard, came out when she was about 14 years old.

"I was really nervous to tell my family because I didn't know how they were going to react," Huggard said.

"I haven't had as many difficulties as other people have. I have been bullied a little bit but not to an extreme extent."

Huggard says horse therapy has been incredibly valuable to her.

"I love animals, I love being around kind people who have gone through similar things as I have," she said.

"You have to be calm around them. You can't get upset because they sense that and it makes them freak out or get upset. You do have this certain kind of calmness that just relaxes you and tones you down."

Kennedy says sharing who you are, as a sexual minority, isn't a one-time thing.

"You are constantly coming out, you are never done coming out and it's hard," he said.

While he used to be angry a lot, today, he's channeling his energy in more productive ways.

And Rainforth says working with horses can be another way to express yourself.

"Sometimes the therapist's office isn't necessarily the easiest place to go for everyone to spill their guts," Rainforth says.

And Kennedy has done just that, and he's happy with what he's learned.

"I am just so much happier. I feel so much lighter," he said.

"I feel like I am not carrying the weight of the world on my shoulders any more. I feel like I can express myself in the ways that I want to. I feel way less insecure and way less paranoid all the time. I am so much lighter. Animals don't judge. Animals have no biased opinions or preconceived notions. They are just there to help."

Huggard says riding horses, with other people like her, has been therapeutic.

"I was very anxious at first. I wasn't sure if I was going to be comfortable or the horse would be comfortable. It worked out really well. It was a good match," she said.

"Not all people are kind. Animals are a lot simpler. It is just easier to connect. Not everybody has friends. Not everybody likes being in big social groups. So having something, even if it's a horse or a cat or a dog, to just talk to and relax with is nice to have."

Kennedy says the equine therapy has helped him feel a lot better about himself.

"I am just a much happier person now," he said with a big smile.

And he plans to keep that going.

"I'm not as bad a person as I thought I was and I want to keep feeling that way."

With files from CBC's Justin Pennell