'This isn’t the first racist rant we’ve heard in Canada. It won’t be the last.'

The video, which was recorded at a Lethbridge, Alta., Denny's on April 21, shows a woman swearing at a group of four men, telling them to go back to their countries, accusing them of not being Canadians and threatening violence.

Since the video was posted online this week, it has drawn outrage and racked up more than 1.3 million views.

"I think what we need as a society is to learn from this," said Davis at a news conference Thursday.

Davis said as an Indigenous man, he's also faced "ignorant" accusations that he's not a taxpayer — one of the insults tossed out by the woman in the video.

"When she went on that whole tax tirade, I've lived that myself as an Aboriginal. People not knowing things, they start hurling insults based on ignorance. So when I heard that it struck close to home for me as well.

"To each their own, everyone's entitled to their own opinion, [but] there's no getting around the fact that the comments that were made were disgusting and should not be tolerated," he said.

Lethbridge police are investigating the incident, and interviewing the parties involved.

Monir Omerzai, the man who recorded the video and one of the targets of the woman's comments, said he and his friends — all of whom are originally from Afghanistan — were joking about video games and discussing who would pay the bill when the woman confronted them.

In an interview with Lethbridge News Now, the woman — who identified herself as Kelly Pocha from Cranbrook, B.C. — admitted her comments were racist and that she had been drinking that night.

She said the argument commenced when the men "started talking in their own language" and began laughing, which she thought was directed at her.

The two sides were seated in adjoining booths. Pocha stood up several times, threatening to strike the men.

"Speak English or don't speak at all," she can be seen and heard saying on video, warning the men they weren't dealing with "one of your Syrian bitches right now."​

Davis said on the night in question, police were called to the restaurant for a report of a fight in progress. 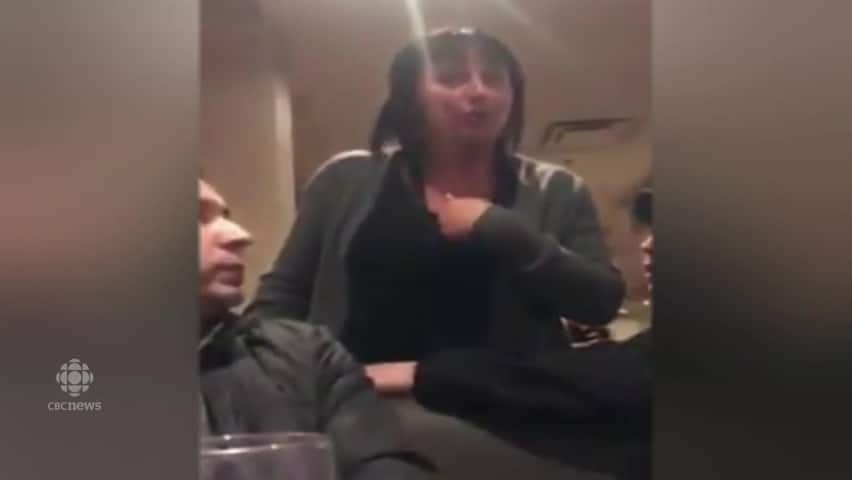 3 years ago
1:28
Video of a woman's racist tirade against four men in a Lethbridge restaurant. 1:28

When officers arrived, the two groups were already separated.

The restaurant asked both parties to leave, a request officers helped to facilitate, which was confirmed by a video police obtained from Denny's — contrary to online rumours that police only removed one of the two involved parties.

"Social media is not evidence," Davis said. "It's very easy to armchair quarterback three weeks after the fact when the video's out there and you're hearing a lot of one side of the story without having the facts."

Police are also investigating Omerzai's allegation that he told an officer he had recorded video of the incident, and was brushed off.

The chief also lauded a bystander heard off camera standing up against Pocha in the video.

"If we as a society stand up for one another and stand up for what's right in this country, I think that's a step in the right direction," he said. "This isn't the first racist rant we've heard in Canada. It won't be the last."

The Criminal Code of Canada states that it's against the law to communicate statements that incite or willfully promotes hatred against an identifiable group, which includes people distinguished by race, ethnic origin, religion, nationality, age, sex, sexual orientation, gender identity, or mental or physical disability.

Hate is more often taken into account in sentencing for other crimes, as the Criminal Code states a judge may take into account if a crime, like uttering threats, was motivated by hatred against an identifiable group.

"The threshold for hate crime charges in Canada is so high it would require the Attorney General's approval," Davis said.

Pocha's employer announced it had fired her on Wednesday, and Denny's issued a statement saying the company was disturbed by the incident, but stating the manager followed protocol.