Larry Kwong, the first player to break the NHL's colour barrier, has died at age 94 in Calgary. 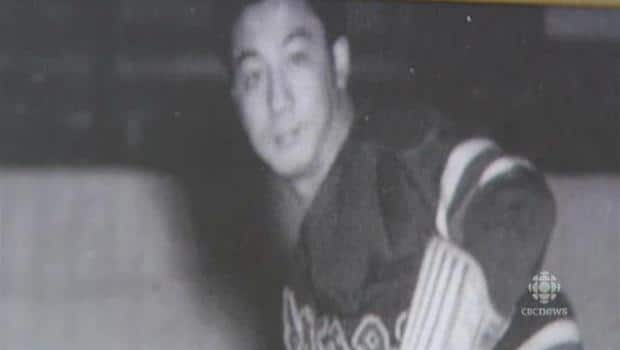 The first player to break the NHL's colour barrier has died at age 94 in Calgary.

Larry Kwong, who was Chinese-Canadian, played a short, history-making shift in 1948 — an achievement now lauded as pioneering for the sport.

A year after Jackie Robinson broke baseball's colour barrier, Kwong spent less than a minute on NHL ice. He was invited to play the last shift of the third period for the New York Rangers in a game against the Montreal Canadiens.

At the time, Kwong was the leading scorer for his minor league team, the New York Rovers. He was a favourite of both the media and fans and was nicknamed both "China Clipper" and "King Kwong."

He later said he often wondered how much racism and discrimination played into why he wasn't given a fair shot at playing professional hockey.

"I was disappointed in them because when I made the Rangers, the whole country had my name in the paper that I was playing in the game," Kwong told CBC News in 2013. "And it turned out, I didn't get much of a chance."

He returned to his minor league team shortly after the game, and the single shift was later deemed a publicity stunt. Kwong went on to become a scoring star and coach in senior hockey leagues in Canada and Europe.

'He'll be there forever'

A few years ago, Kwong's achievement was honoured as helping to break the sport's colour barrier.

A school teacher and a student in Kwong's hometown of Vernon, B.C., launched a petition to induct Kwong into the BC Sports Hall of Fame.

"I thought it would be really cool… and once he gets in there, he'll be there forever," said then-10-year-old student Gavin Donald.

In 2013 — 65 years after stepping onto NHL ice — their efforts paid off and Kwong entered the hall of fame.

"The more you look into Larry's story, the more you see an exemplary life and you see how Canada has changed," teacher Chad Soon told CBC on Monday. "And it was through the efforts of people like Larry, showing us the way and showing that everybody should be included."

Kwong started playing hockey on frozen ponds in Vernon as a child. But at the time, his family, who were local grocery store owners, faced segregation and, like all Chinese-Canadians at the time, were banned from even voting.

But Kwong listened to the hockey game on the radio every Saturday night and kept playing despite discrimination.

"I was afraid to tell my family because if I did tell them that, the first thing they would say is, 'You're not going anymore,'" Kwong said. "And that means I couldn't play hockey or sports. I toughed it out, just toughed it out."

He joined the Vernon Hydrophones and quickly became the team's star player. He then jumped to the senior league, where the pay was a promise of a job in a local smelter.

"We were all working for a job in those days. We didn't get the money that they're getting now," Kwong told CBC News. "They wouldn't give me a job because I was Chinese."

His hockey talent shone through and he was recruited by the New York Rangers' scout for their top Eastern Hockey League farm team, the New York Rovers. He later became a top player in the Quebec senior professional league and he played in England and Switzerland, where he also coached.

Kwong later lost both legs due to poor circulation, yet even into his 90s, he continued to go to the gym three times a week.

An obituary says Kwong died peacefully on March 15 in Calgary. Donations in his memory are being accepted by the Calgary Rotary Foundation, and a tree will be planted in his name at Fish Creek Provincial Park.

With files from Reg Sherren and Brady Strachan