A hummingbird with antennae? No, it's Alberta's large, hairy hawk moth

An odd creature was caught on camera in two different areas of Alberta recently, and as it turns out, they happened to be very large, hummingbird-like moths.

An odd creature was caught on camera in two different areas of Alberta recently.

In a video taken by Stuart Mair while in Waterton, it appears to have striped wings and drink nectar from a flower using a long, curled tongue.

Mair, who lives in Calgary, thought it was a hummingbird initially.

But it turns out it's actually a type of bug — a hawk moth, to be exact, says expert Ken Fry, an entomologist and horticulture instructor at Olds College.

It differs a bit from a hummingbird moth, which is from the same family. Hawk moths are distinguishable by the size of their bodies and their scaled wings, Fry says.

"They're fast, they hover, they go to flowers and they have that long beak-like mouth," he said.

"We always think of moths being very, very small, but the hawk moths can be quite sizeable. There's some fairly large ones."

He says the caterpillars can be as big as a person's biggest finger. 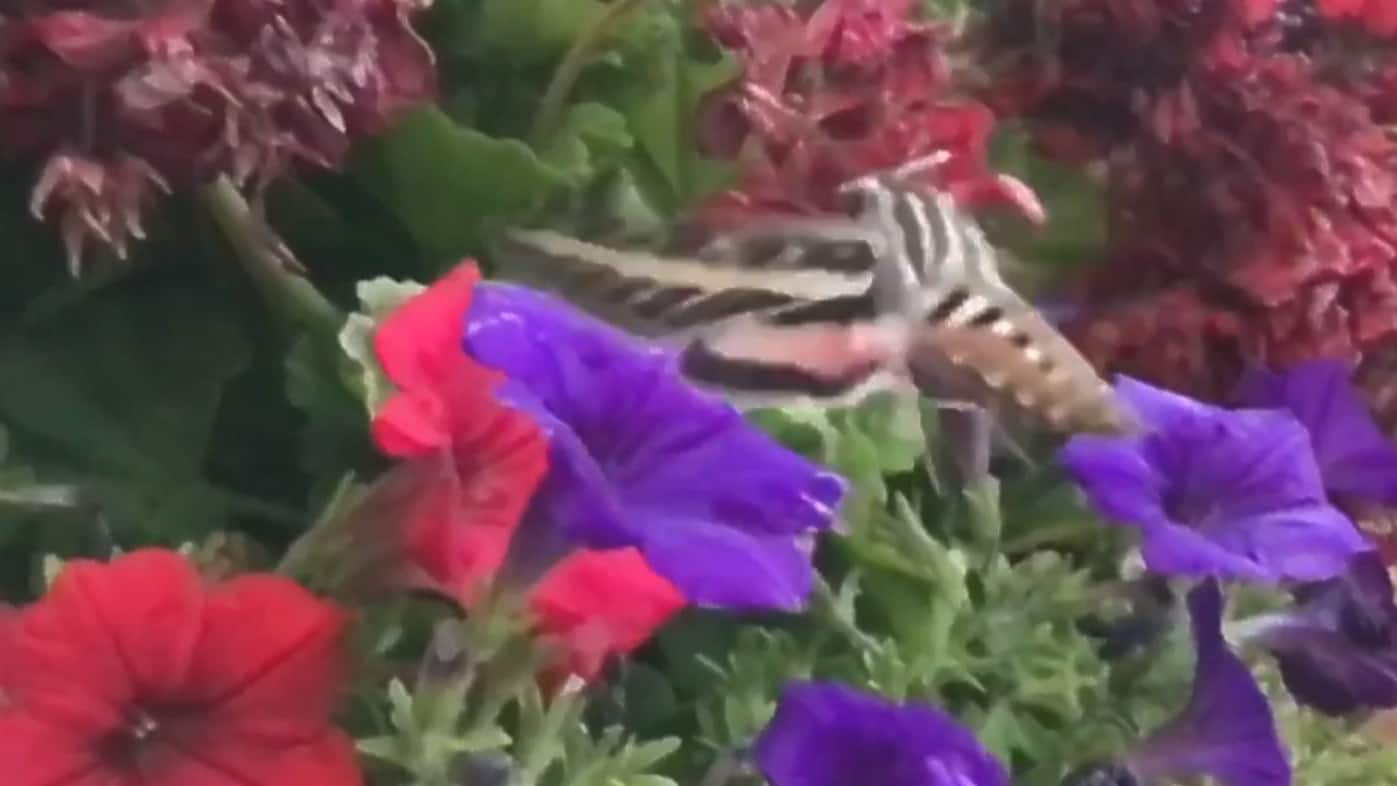 Is it a bird, or a bug? Watch this creature fly around Waterton in southern Alberta

6 months ago
0:18
Pamela Mair's husband initially thought this was an actual hummingbird when he took the slow-motion video of this moth. 0:18

"They can be quite imposing when they're feeding," he said.

The moth itself is also quite robust, Fry says, and tends to have a stout body.

The moths have a lot of feeding to do when they're caterpillars to bulk up.

It's not all mass, though, he notes. Some of it is hairs so they can keep warm in the night or to cool in the day. He compares it to a fluffy cat.

With a slow start to summer, plus a short burst of heat that made many of them grow up all at once instead of some every week or so, he says the sightings aren't surprising.

"Now you're starting to see them more in a condensed amount of time," he said.

Fry says he gets calls from people each year about various strange garden sightings, which in part might be because more people this year have been sticking around in the province.

"I think that's a great thing that we're getting familiar with the ecology in our own backyard," he said.

These moths are pollinators, too. So it isn't a bad thing if one turns up in your garden, as one did in Teena Thomas's yard in the Priddis area.

She was out with her dog around 6 a.m. on Wednesday when it caught her eye.

Thomas, too, initially thought it was a hummingbird because she could hear the buzzing of its wings, plus hummingbirds often frequent her garden, which is full of petunias. 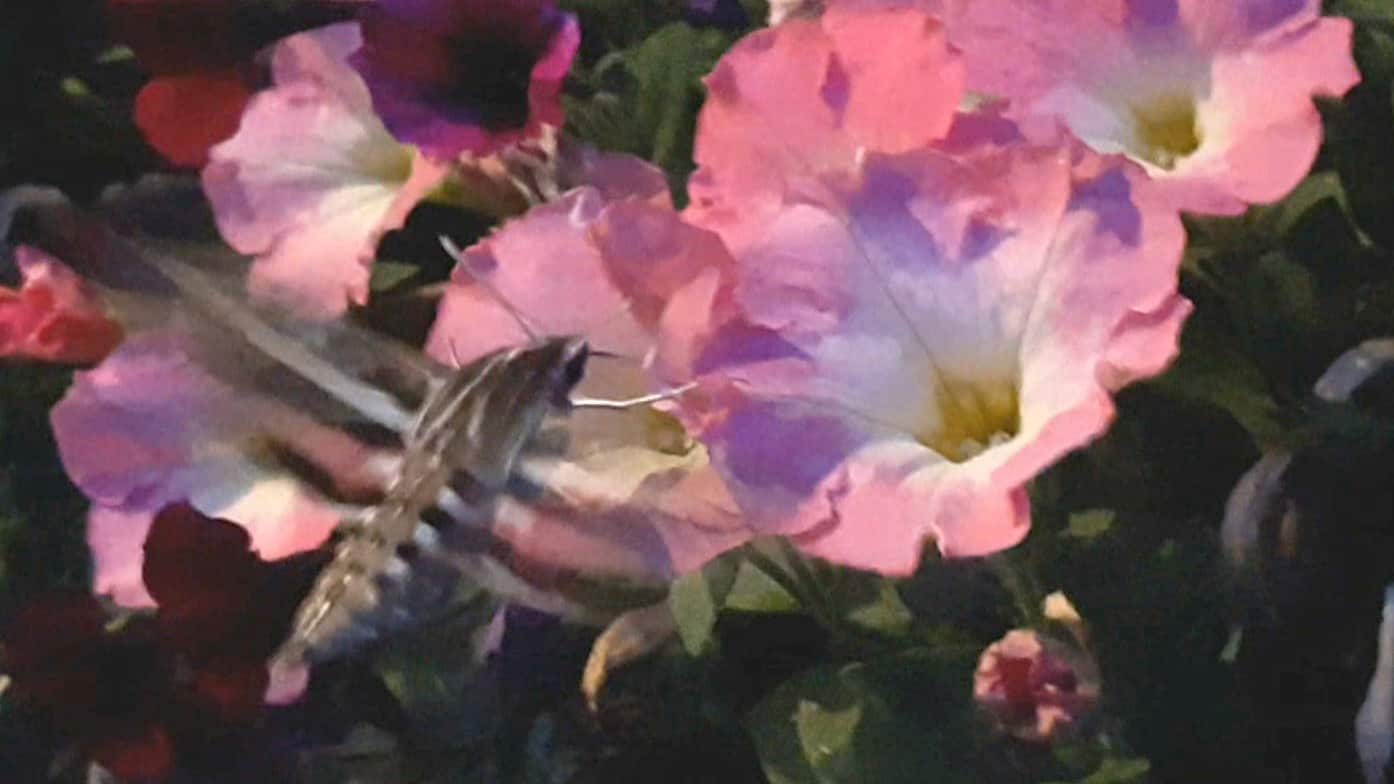 6 months ago
0:27
Teena Thomas was surprised by this sighting of a moth that shares the size and characteristics of a hummingbird at her Alberta home. 0:27

"I had to take a second glance, because it was dark out still," she said. "I wasn't sure what the heck would be flying around at that time."

She says she could see antennae and a pair of big eyes.

"I felt like it was looking at me," she said.

That's why she says she paused before running to get her phone to record it — she though her movement might scare it away.

"It kind of looked like it had feathers," she said. "It was big, it had to have been close to three inches."

She went online to investigate, and she says she found an extensive list of moths. According to Fry, this one is also a hawk moth.

Thomas says she wasn't afraid of it since it wasn't aggressive and didn't seem at all fazed by her following and filming it.

While Thomas doesn't consider herself a bug person, her 3½-year-old grandson is, which compelled her to capture the encounter on video.

"I pretty much have lived in Alberta most of my life … and I have never seen one," Thomas said.

"What I read is if you see one, you're actually quite lucky.… Now I'll be on the lookout for more."

With files from Amy Tucker and the Calgary Eyeopener.