Earlier in October, 16-year-old Keegan Hogdson surfed his way to a world championship. Now the self-described "country boy" from Alberta is deciding whether to go pro. 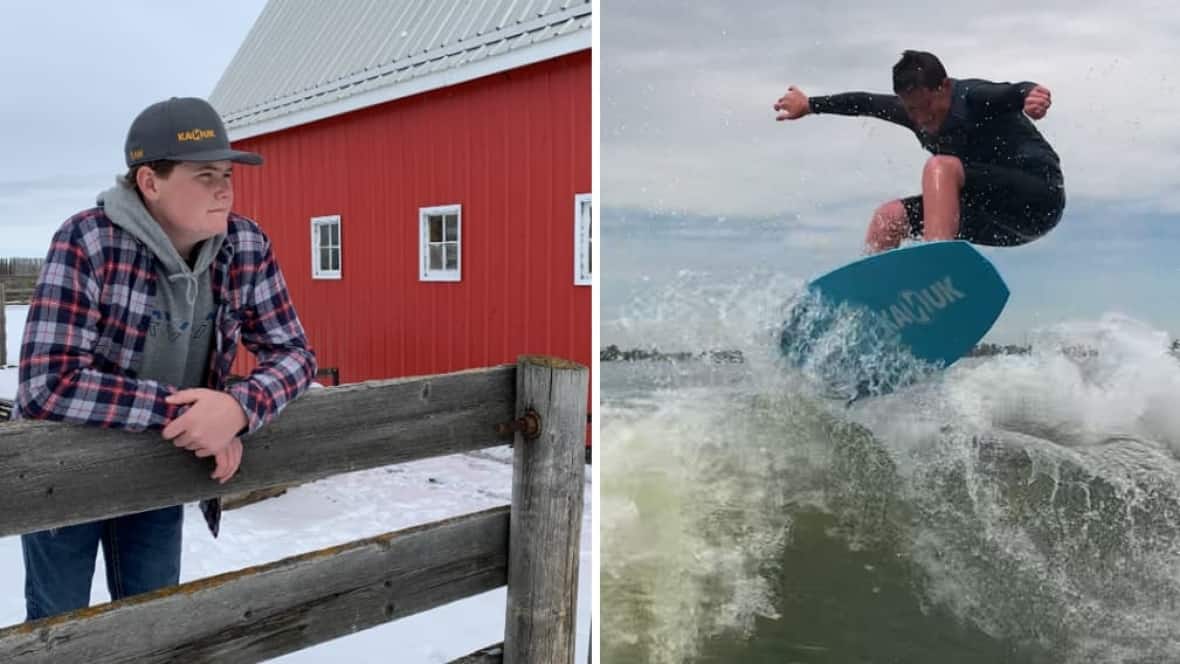 4 months ago
2:33
This 16-year-old "country boy" from a farm near Olds is considering going pro after winning a world championship in wake surfing early in October. 2:33

"Not too shabby for a farm boy from Alberta."

Earlier in October, Keegan Hodgson — who was then 15 but has since turned 16 — competed in the 2020 World Wake Surfing Championship in Vernon, B.C., in the Outlaw Male Surf category, clinching the number one spot.

The win is doubly impressive because of his recent adoption of the sport and due to the fact that he hails from Olds, Alta., where there are limited large bodies of water in close proximity — and limited months of the year with warm weather to train.

"I've seen him surf in rain, cold, hail, wind. I mean, he loves a good windy day in competition," Hudson said. "Others would call it a day, he just pushes through."

But Hodgson has voraciousness for the sport that propels him, his coach said.

"You can't really teach that level of enthusiasm that he has," said Hudson. "He rides five hours a day, he will surf until his legs are beet red in the coldest water."

Wake surfers use a shorter and squatter board compared to ocean surfers. They start out by being towed by a rope behind a boat designed to create an endless wave.

Training in the prairies

Hodgson, who has only been competing in world competitions since 2018, hones his wake surf skills on bodies of water like Dickson Dam, located about 15 minutes from his family's farm in Olds.

He first met Hudson at a local Water Ski and Wakeboard Alberta event, and began entering Alberta competitions from there.

"We usually surf until the lake freezes over and then we go to Phoenix as much as we can," he said.

"I just worked really hard this summer, I trained almost every day on the boat at home," said Hodgson.

"Had lots of time to hang out and just do tricks."

His mentor said he picked up a handful of professional level tricks this year thanks to that.

The Outlaw Male Surf World competition is a step above amateur wake surfing and just under pro competition.

This year's competition was unique in that everyone who participated in the event from Canada met in Vernon to compete virtually. There were competitors from all over the world, like Japan and Russia, who also met in central locations to compete.

Competitors submitted 45-second video of raw footage showing their best run to the judges. Hudson said some of the eight competitors Hodgson was up against took a day or two, but all he need was "one good afternoon."

His three biggest moves — the 3 shove, front shove and air 180 shove — involve quick movements, spins and, at one point, riding with a back to the wave.

"[There are] no prescribed moves, you can do whatever you want," he said. "But you're trying to do the biggest tricks you can so you can get the best result."

Hodgson claims there is no secret to his success, he just works hard and stays focused. But he credits his work ethic to his two hard-working parents.

"Mentally, I visualize my run … I knew this was it, this was what I worked for all season, knew that I wanted to win the world championship," he said.

Waiting for the results was especially nerve-wracking this year because the judges had to wait for, sift through and cut together so much footage.

Hodgson heard the news of his win while surrounded by family and friends at his aunt's house.

Given the complications of COVID-19, Hodgson still doesn't know for sure what his future will hold when it comes to travelling the States for winter competitions — but Hudson sees huge potential in him should he move on to pro competitions.

"He's definitely got room to grow … I think the sky's the limit for him," she said.