She donned a hijab to join a secret marathon in Afghanistan

Running a marathon for the first time is hard enough for most people but Kate McKenzie took on an even bigger challenge. She decided to run her first marathon in Afghanistan. In secret. 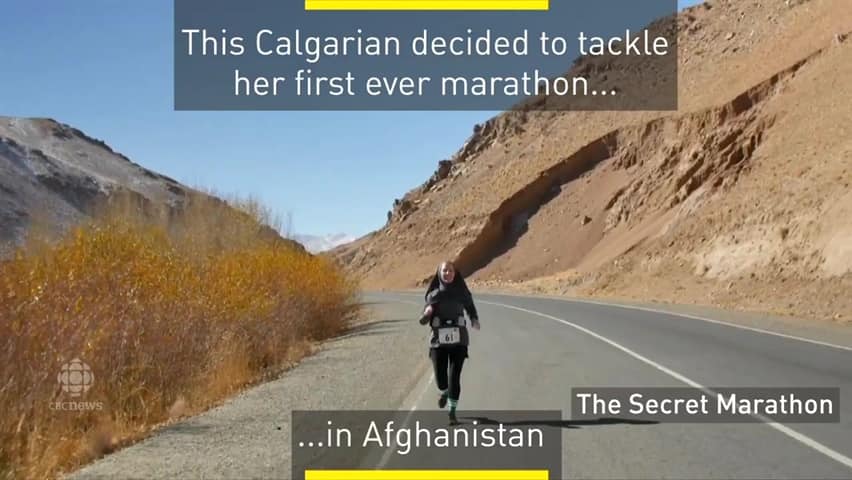 She donned a hijab to join a secret marathon in Afghanistan

4 years ago
0:40
Kate McKenzie's adventure is the subject of a forthcoming documentary 0:40

Running a marathon for the first time is hard enough for most people.

But Kate McKenzie took on an even bigger challenge.

She decided to run her first marathon in Afghanistan.

McKenzie ran the 42-kilometre distance through a mountainous valley alongside a group of Afghan women.

"When a lot of people think of Afghanistan, they think of a war-torn country and yet I looked at this amazing community that came together to host a marathon," she told the Calgary Eyeopener.

"Not only does it paint a different picture of that country, but it also says this place doesn't have to be defined by war, it can be defined by amazing acts of courage. For me, the chance to be part of sharing that story was such a privilege."

Leading up to the event, McKenzie and others taking part had to make sure they didn't post a word about it on social media. At least until it was over.

"There was a lot of risk involved," she said.

"For me, if I want to go run, all I have to do it put on a pair of running shoes, but that's really not the reality for a lot of people in Afghanistan."

Along with the threat of landmines, women can find themselves the target of attacks.

"They could have stones thrown at them or insults," she said.

"And they can actually be under threat or have their families under threat by the Taliban. For these women, this is one of their only opportunities to run outside."

Currently studying in Toronto, McKenzie trained for the event in Calgary under coach Martin Parnell — himself a world record marathoner — wearing a hijab while she ran to get used to it.

"He connected me with an amazing group called the Calgary Muslim Marathoners, they welcomed me into their homes, showed me how to properly wear a hijab, what would work best for running and how to be culturally appropriate," she said.

"It was making the run about 5 C hotter... it was a very different experience for me and just made me realize something I take for granted every day, being able to go for a run, is such a privilege."

McKenzie described the route used for the actual event as "pretty crazy."

"The route doesn't get announced until literally right before the marathon happens, and that's to protect the safety of the runners," she said.

"All the way along the route there were armed guards."

Starting at 2,500 metres above sea level, competitors gained another 400 metres along the way.

"The elevation was a huge challenge," said.

"To put it in a Calgary terms, it's like having 15 Calgary Towers stacked up, that was the height of the elevation I was running at. We were basically running uphill for two hours then downhill for two hours."

They also had to contend with temperature swings.

"But all the while you're seeing these amazing Afghan participants surrounding you and you can't help but have a huge smile on your face," she said.

Many runners keep close tabs of their pace, but McKenzie said the goal was to do more than just put up a good time.

"This was never about being a Boston [Marathon] qualifier or anything like that," she said.

"I started running as a little girl because I loved being able to run fast and feel the wind in my hair. But as I've kept running, it's been an important way to deal with my own mental health challenges. Clara Hughes the Olympian has said 'movement is medicine,' and for me, that rings so true. Being able to move, being able to run, it does make you feel free and that's really at the heart of why I wanted to do this."

McKenzie's adventure was captured by a documentary film crew, with the production slated for release in 2017.