Alberta is in 'crisis' over low energy prices, Trudeau acknowledges, as thousands protest in Calgary

Prime Minister Justin Trudeau said the current low price of Canadian oil is a "crisis" for Alberta, but brought nothing in the way of new help for the industry while greeted in Calgary by thousands of protesters on Thursday.

Prime Minister Justin Trudeau said the current low price of Canadian oil is a "crisis" for Alberta, but brought nothing in the way of new help for the industry during a visit to Calgary on Thursday.

He ventured into the heart of Canada's oil and gas industry just a day after his government's fiscal update, which had drawn fire from the provincial government and others who felt it didn't do enough to help the ailing energy sector.

As thousands of pro-pipeline demonstrators shut down part of Calgary's downtown core outside one of Trudeau's speaking events, the prime minister reaffirmed his government's commitment to listen to energy industry leaders. He also touted tax changes introduced in the fiscal update.

Trudeau told Albertans he understands they are hurting, including from the price gap between West Texas Intermediate and Western Canadian Select, which averaged around $45 US per barrel last month.

"There is no question that folks in Alberta, folks here in Calgary, are living through extremely difficult times. This is very much a crisis," Trudeau said.

"When you have a price differential that's up around $42, $50 even, that's a massive challenge to local industry, to the livelihood of a lot of Albertans. I hear that very, very clearly," he said while talking to reporters after making an affordable housing announcement Thursday morning.

Alberta Premier Rachel Notley, who was also in Calgary, said the oil price gap was costing the Canadian economy $80 million a day.

The province's oil is selling for a lower price than West Texas Intermediate in the U.S. due, in part, to a lack of pipeline capacity to move a growing glut of Canadian crude to markets.

Trudeau reiterated the federal government was doing what it could to get the Trans Mountain pipeline expansion built, which would triple its capacity to carry oil to tankers on the west coast. The federal government bought Trans Mountain and its expansion project for $4.5 billion last summer only to have the Federal Court of Appeal strike down its approval, citing inadequate Indigenous consultation and failure to consider impacts on marine ecosystems.

"We are working very hard to change that."

That, combined with another tax benefit related to asset depreciation, will help businesses, he said.

"Because of these changes, the marginal effective tax rate for new business investment in Canada will become, once again, the lowest rate in the G7, and that will make a big difference for Alberta companies looking for that competitive edge," he said.

But many Albertans, including energy industry leaders and provincial Finance Minister Joe Ceci, blasted the Liberal government's fiscal update, saying it failed to include any direct line items that would bolster Alberta's ailing energy sector and help close the price gap between benchmark oil prices and Alberta's oil.

Trudeau also dodged a question from a reporter when asked whether his government would help move more oil by rail.

When Trudeau addressed the chamber luncheon, protesters rallied outside calling on Ottawa to do more for the energy sector.

Calgary police estimated about 2,000 protesters gathered outside the hotel where he was speaking amid chants of "build that pipe!"

"Until we've got good visibility that we're gonna be able to move this production, either by rail or by future pipelines, capital activity — the investment into the economy — is going to drop dramatically in western Canada."

Evans said the industry should be cutting production to stabilize costs, a popular, but divisive topic in Alberta's oilpatch.

Cenovus and Canadian Natural Resources have called for the provincial government to impose temporary cuts until the oil glut clears, but others including Suncor Energy and Husky Energy have rejected the idea.

Later in the afternoon, Trudeau met with executives from a number of oil and gas companies behind closed doors.

Following the meeting, Cenovus CEO Alex Pourbaix said he was satisfied the prime minister understands industry concerns over low prices for Alberta crude. But he said it's a matter that needs to be addressed provincially.

"We've got to be very thoughtful about Bill C-69," he said. "It's got to be something that actually provides a certain outcome for industry in a reasonable timeline: transparent, science-based."

The Canadian Association of Petroleum Producers, which didn't participate in the meeting with Trudeau, welcomed tax writeoffs in the fiscal update, calling them a "positive first step" but not a solution to problems faced by the energy industry.

Trudeau was not scheduled to meet with Notley during this trip, but the Alberta premier is headed to Ottawa next week to discuss the price differential.

Watch as PM says he sympathizes with Albertans: 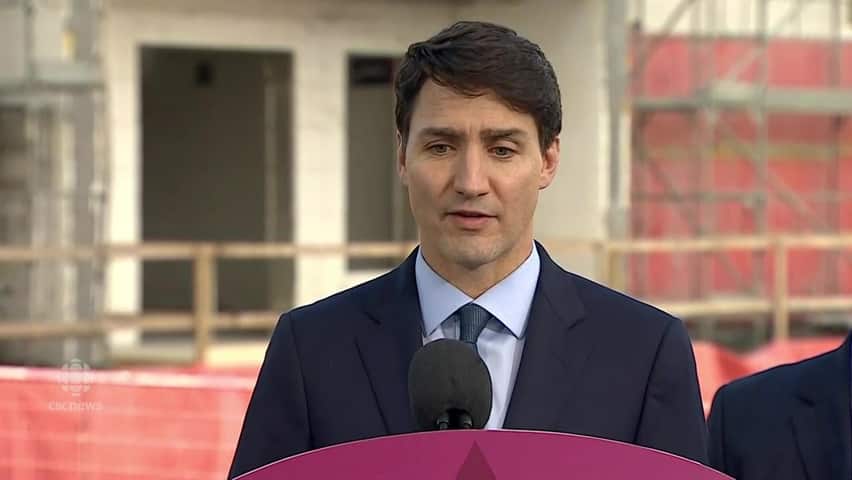 The sentiment was echoed by Steve Laut, executive vice chairman of Canadian Natural Resources, who was part of the group to meet the prime minister.

"The accelerated capital cost allowance doesn't matter if the differentials are where they are because no one is going to spend any money," he said.

Jason Kenney, the leader of Alberta's United Conservative Party, called Trudeau's visit to the province "an insult," and blamed the prime minister for policies that hurt the energy industry.

"It is no longer adequate to come out here, pat us on the head and tell us he feels our pain," said Kenney. "It's time for action."

The only new development Trudeau announced was related to affordable housing.

During his first stop, he announced $31 million to build a 15-storey, affordable, rental housing tower in the city's southwest geared toward middle-class families.

It will house 121 units when complete and Trudeau said it will use energy storage, wind, solar and battery power to make the project energy efficient and help residents save money on bills.

With files from Tony Seskus and The Canadian Press