The UCP leader says he rented a Calgary basement suite from his mother and used it as his primary residence. But a former staff member at that retirement community says subletting isn't permitted there.

UCP leader says his primary residence has remained in Calgary throughout

A former staff member at the Calgary retirement community where Jason Kenney claims to have rented a basement suite from his mother says the community's lease agreements do not permit subletting — and a political scientist says the optics of the situation could be a problem heading into the spring election.

On the weekend, lawyer and political activist Kyle Morrow accused the United Conservative Party leader of claiming his primary residence was in Calgary while living in and collecting secondary residence subsidies in Ottawa.

House of Commons expenditure reports show Kenney collected secondary residence subsidies in Ottawa between 2012-15 of about $10,000 each year as an MP for Calgary Midnapore, while his mother's retirement home in Calgary was listed as his address with Elections Canada.

Jason Kenney's spokesperson said the United Conservative Party leader rented the finished basement of a bungalow at his mother's retirement home as his primary residence for a portion of that time, where he lived to care for his mother after his father's death. 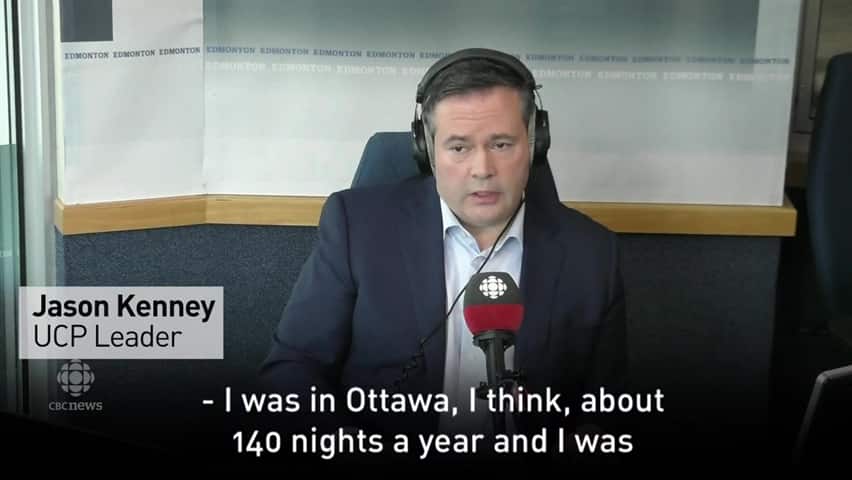 Flight records show that Kenney only expensed 10 travel points on parliamentary flights in 2013-14, (itemized flight records with destinations were not available for that year), and five round trip flights from different departure cities to Calgary in 2014-15.

Morrow, a former Liberal candidate who currently works as an anti-bribery and corruption lawyer, says he's received harassment and death threats since he first brought the allegation forward.

A former staff member who worked at the retirement home for a portion of the period Kenney's mother lived there — and was familiar with her, describing her as a kind woman — said, while there was a bedroom in the basement of Kenney's mother's home, Kenney was rarely there.

CBC News is not identifying the staff member, who is concerned about the impact her comments could have on her employment.

Lease agreement did not permit sublets

She said between 2012-13, she never saw Kenney but heard from fellow staff that he had visited for just a few days.

And, she said even if he stayed for longer, subletting was explicitly not permitted under the lease agreement, which residents signed upon moving in.

The retirement community's media representative declined to answer any questions and refused to provide a copy of their regulations regarding sublets, citing respect for their residents and their privacy policy.

The big problem for him is the appearance that he rarely visited, or insufficiently connected with his constituents.- Lori Williams, political scientist

Kenney says he's paid his taxes in Alberta and has been active in the community, including his parish and local legion, for years. He said he spoke to the director of the retirement community, who maintains he complied with the rules.

"But it's true that when I was a senior minister, to be honest with you I was pretty much living on the road," Kenney told Alberta@Noon on Tuesday.

"I was fully compliant with all the rules. That was confirmed for me by my pay and benefits advisor with House of Commons administration."

The House of Commons rules state that a member's primary residence must fit one or more of a set of criteria, which include:

The rules state that, in a situation where both residences could qualify as a primary residence, MPs should consult Financial Management Operations for advice.

The Board of Internal Economy — the body that governs the financial and administrative matters of the House of Commons — told CBC News it does not comment on matters concerning individual MPs, current or former. When a request for an investigation is received, the board reviews matters as required, it said.

Kenney said he's always been transparent with his living situation and compliant with the rules.

"The rule is not that you own a house in your constituency and then live there 170 nights a year or something, because most MPs would not qualify," he said.

Alberta@Noon host Judy Aldous asked Kenney to respond to a question received via social media, asking him to justify the $10,000-per-year housing subsidy he received by quantifying exactly how much time he spent in Alberta.

"I don't know where I'd get the records. I think most of my scheduling and expense submissions were probably shredded when I left parliament … I was in Ottawa I think about 140 nights a year, and I was on the road or in Alberta the rest of the time," he said.

"I think this is normal. Families have fluid arrangements."

Mount Royal University political scientist Lori Williams says, while it doesn't look like Kenney technically took advantage of the taxpayers, his character might be drawn into question heading into the spring election.

"The big problem for him is the appearance that he rarely visited, or insufficiently connected with his constituents," she said.

"There's the compliance of rules question, and then there's the optics question. And if it looks like something improper was done or that, even though it was compliant, it looked like he was taking advantage of taxpayers — for somebody who has always spoken about accountability, transparency … they may still be upset."

Kenney says he would welcome investigation

"The notion that you'd see someone only visiting their riding four times in the course of 12 months, it speaks a little bit to what they think representation looks like. And I think perhaps Albertans will want to consider whether that's what they're looking for in someone that's running to be their premier," Notley said.

"But at the end of the day, it's going to be investigated, as it probably should be, and we'll see what happens."

Kenney said he would support an investigation, but he doesn't think there's anything worth looking into.

"I'm absolutely certain they'll find there is nothing inappropriate," he said.

The NDP also raised concerns about Kenney's residence, pointing to a $399 political contribution Kenney made to the Ontario PCs in 2016.

Kenney was an MP for Calgary Midnapore (a riding that was created out of the dissolved district of Calgary Southeast) from 1997 to 2016.

Elections Ontario rules state that a member of the House of Commons living in Ontario but representing an electoral district outside of Ontario cannot make a donation, nor can someone living outside of Ontario, but the UCP said it was not a donation, saying it was spent on event registration.

The UCP say Kenney attended the convention as a non-voting delegate.

But the NDP disputes that version of events, saying the archived convention website shows there were no non-voting delegates, only non-member observers who were charged $1,000 to attend. The fee for a delegate was $399.

The NDP also noted Kenney had not donated to either the Alberta PC or Wildrose Parties, something confirmed by a search of the Elections Alberta website.

The UCP fired back, saying Premier Rachel Notley may have donated to the Alberta NDP while living in B.C. in the 1990s, based on comments Notley's husband made at an NDP convention last year. Annual campaign contribution lists on the Elections Alberta website only date back to 2004.

But Notley says her contribution, unlike Kenney's, was legal under provincial electoral laws, because she still had a residence in Alberta.