Isla Sobejana Diesmos says she's learned more than how to just headlock her opponent with her feet; the sport has helped her develop confidence, strength and courage. 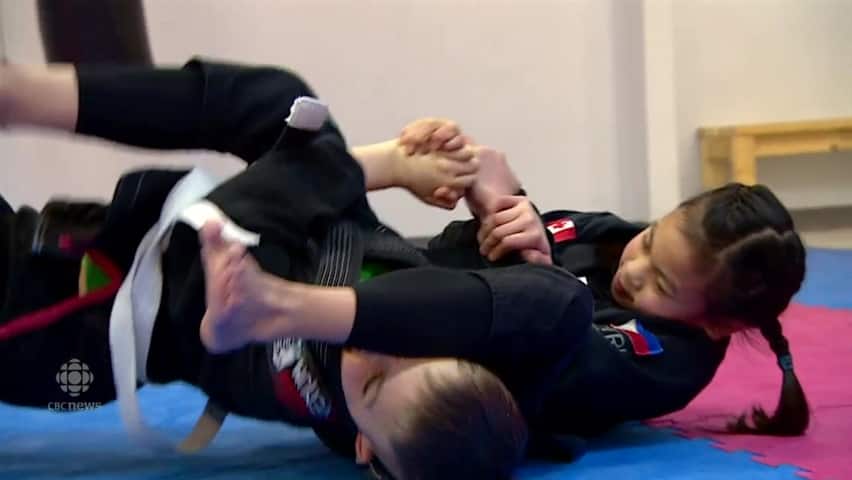 She competes against boys, and she beats them.

She competes against girls, and she beats them, too.

But if you ask jiu-jitsu world champion Isla Sobejana Diesmos why she decided to take up martial arts, the 10-year-old fighter will tell you it wasn't her idea.

She recalls that painfully awkward first day when she walked into the room, stepped onto the enormous blue mat and felt a terrifying compulsion to flee.

Isla's parents thought the exposure would be good for her.

"Before, people were rude to me at school and pushed me around. So my dad decided to put me in jiu-jitsu," she explained.

Isla's instructor, Alex Roque, says parents commonly enrol their kids in his classes because they're concerned about bullying at school.

Isla is a shining example of that inner transformation, Roque said.

"When she first came, she was very shy, very quiet. It was difficult to get to know her," said the owner and operator of the Brazilian Jiu-Jitsu Fight Club in Calgary.

But beneath that meek exterior, Isla had remarkable natural instincts for the sport, he said.

Less than six months after her first class, Isla took home her first gold medal in her first competition. And her success has snowballed from there.

"It seems like it doesn't matter where she goes. She just puts on the best performance, and she comes out on top," Roque said.

And even though she's fierce competition at the gym, her sparring opponents can't help but like her, he said.

"I love to have her here. All the other kids as well, they love her.

"I guess her personality's coming out. It's blossoming right now," he remarked.

Aiming for the red belt

Isla says she's learned more than just how to headlock her opponent with her feet or perform a bow and arrow choke hold.

"I found confidence, strength and courage," she said.

And now she revels in the time she gets to spend grappling with her opponents on the mat.

"I'm gonna do this until I'm a red belt," which is the highest achievable rank, she explained.

Her ultimate goal is to become like her sensei, Roque.

"I wanna teach other kids or people who doesn't know jiu-jitsu," she said.

"I'm gonna say, 'I was just like you on my first day. And if you train more and get to know people, you'll be fine.'"