The owner of an Alberta barbershop is vowing to stay open and fight the consequences in court, despite being issued a verbal order from Alberta Health Services to close immediately for violating provincial COVID-19 restrictions.

The owner of an Alberta barbershop is vowing to stay open and fight the consequences in court, despite being issued a verbal order from Alberta Health Services to close immediately for violating provincial COVID-19 restrictions.

"It's just not fair to the public or to business owners," Natalie Klein, the owner of Bladez to Fadez Barbershop in Innisfail told the Calgary Eyeopener.

"Financially, there is no money left, you know we are seeing business owners who are going to use food banks to feed their families, you know, and this needs to end — and I am definitely one of those."

In December, the province said it might lift the latest round of restrictions by Monday. But, Alberta has extended the measures in place — which include the closures of personal services like hair salons — until Jan. 21 in an attempt to avoid a post-holiday surge of cases.

On Tuesday, the province set a new single-day record, reporting 38 new deaths. The total number of deaths from COVID-19 now stands at 1,345.

Klein was issued the verbal order just hours after appearing on CBC's The Eyeopener, and on day one of her reopening. She posted a video, which shows an officer from AHS taping a notice to the door of the salon, on her business Facebook page. The AHS officer was accompanied by an RCMP officer, who remained outside. 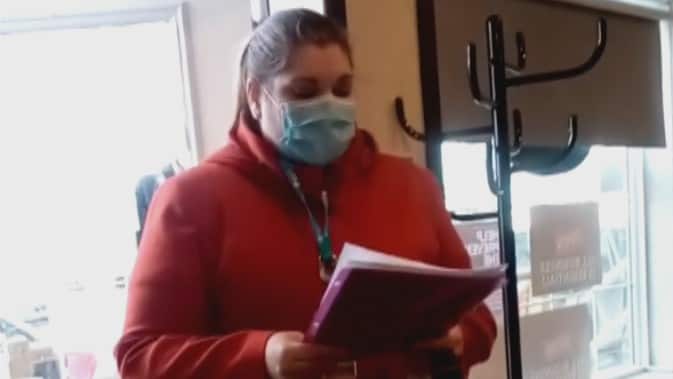 AHS confirmed that Bladez to Fadez had been issued an order to close and said failure to comply with a closure order could result in fines up to $5,000 per day.

Klein said it is unfair to allow big-box stores to stay open while forcing salons to remain closed, and said that she is in deep financial trouble.

"We're kind of forced into a do-or-die situation here, of opening our doors," she said, adding that she has applied for the province's small and medium relaunch grant for small businesses, but that money has not come through.

"It's been very stressful."

Klein, who is the niece of former Alberta premier Ralph Klein, told CBC News she understood that she may get a minimum $1,000 dollar fine for reopening.

Klein said if she is issued a fine, she will fight it in court.

"How can they pick and choose who gets to close and who doesn't … all these big box stores are thriving, and they can operate at 15 per cent capacity, why can't we have one customer in our chair for 15 minutes?"

Klein said for her and others in the salon industry, the restrictions are illogical.

"You can go and get your pets groomed … but you can't go get yourself a haircut?"

Estheticians in Medicine Hat protested earlier this week, calling for the chance to reopen.

Klein said the salon and barbershop industry is frustrated because it's always placed an emphasis on sanitation practices.

"There's a lot of people saying we're jeopardizing health, but that being said, I don't believe we're jeopardizing anyone," she said. "I'm going to quote Jason Kenney on this. And he said, we don't know of a single known case of transmission in a hair salon."

Alberta's contact tracing system collapsed in the fall, and for months the source of approximately 80 per cent of cases was unknown.

Klein said her own father was ill with COVID-19 and that she is not a COVID denier.

"We definitely know the virus is a real thing," she said, adding that she considers the issue as being about small business survival.

"I am concerned about [COVID], but I'm also concerned that I'm standing up for what I believe is right," she said. "So I'm prepared to take that fine, and fight it in court."

With files from Pamela Fieber, Danielle Nerman and The Calgary Eyeopener