After two years of construction, Calgary's first fully automated assisted living apartment building is ready for residents to move in. 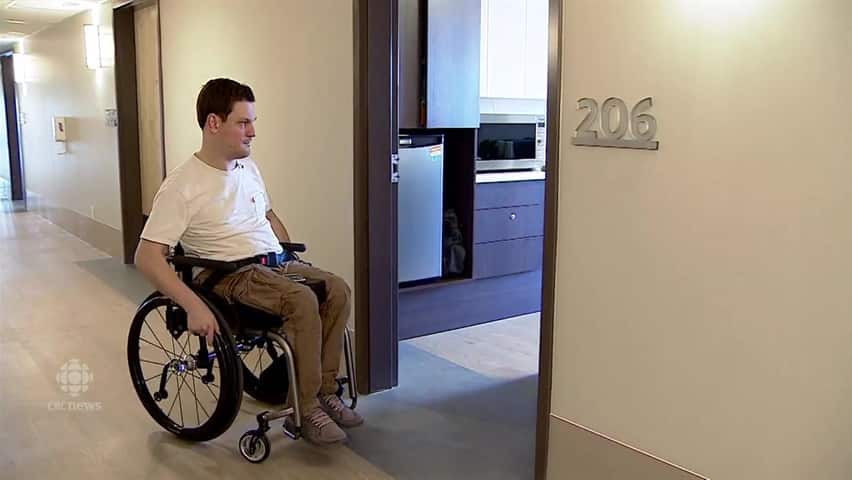 After two years of construction, Calgary's first fully automated assisted living apartment building is ready for residents to move in.

Inclusio is located at 1129 23rd Avenue N.W. in Calgary's Capitol Hill neighbourhood, where it overlooks Confederation Park. The building will be home to 45 low-income Calgarians with limited mobility.

The smart apartments have features like lighting, blinds and doors that can be controlled with touch-screen tablets, as well as other accessible features like wide hallways, two elevators, cabinets that open with a touch and heated sidewalks outside so snow doesn't accumulate.

Ryan Kostiuk, one of the building's new residents, said he and his neighbours all have different needs, but share a desire for self-sufficiency.

"I think that at the end of the day what we all want is the ability to make our own decisions, and the ability to do what we want when we want," said Kostiuk.

Rent, which will cost a minimum of 70 per cent of each resident's gross income, includes utilities, cable and Wi-Fi, all meals, laundry services, 24/7 support and case management.

"Some of the residents need extra support with care, as far as showering and feeding, things like that," said Michelle Rhode with Accessible Housing.

Ground broke on the project in September 2016.

The building will be run by non-profit organization Accessible Housing. The smart technology was done by a Calgary developer, Digital Lifestyles.

The project cost $16 million, and has received funding from the province as well as private investors. The agency is still fundraising and is hoping to raise $4 million more.

Mike Dummer, president of Digital Lifestyles, told the Calgary Eyeopener in November that he wanted to help people like a neighbour of his who suffers from cerebral palsy.

"If you take those obstacles away, you no longer need help. You're now self sufficient and that's what we did," Dummer said.

Accessible Housing has said that by 2019, an estimated 200,000 Calgarians over the age of 15 will be living with a disability.