This Calgary doctor did brain surgery without cutting open her patient's skull, or even making an incision

Elias Pharon, who suffered from uncontrollable essential tremors in his hands, struggling to even to feed himself for the past five years, has a firm grip again thanks to a breakthrough, non-invasive surgical technique performed on his brain by a team of Calgary doctors. 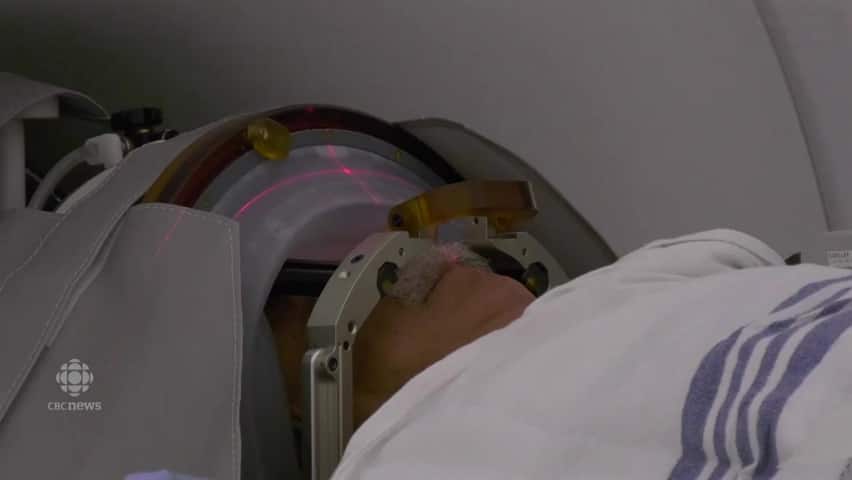 3 years ago
0:39
Surgeons combine MRI and ultrasound technology to burn brain tissue without having to cut skin or drill past the skull. 0:39

Elias Pharon, who suffered from uncontrollable essential tremors in his hands, struggling to even to feed himself for the past five years, has a firm grip again thanks to a breakthrough surgical technique performed on his brain by a team of Calgary doctors.

And they didn't even break his skin, let alone drill a hole in his skull.

"I like to work with my hands and it was for me, almost impossible," he said. "I am determined person. I refused help."

The MRI provides real-time visuals of the patient's brain, while the MRgFUS's highly focused ultrasound waves target a specific area of the brain, essentially burning away the problem spot.

Bruce Pike, a professor of radiology and clinical neuroscience, said ultrasound technology isn't new, but figuring out how to use it to penetrate the skull is.

"The innovation that's happened over the past decade is a very large array of ultrasound transducers," he said. "In this case, about a 1,024 of them in a helmet-sort configuration all focused towards a central point."

A rubber layer surrounding the helmet is filled with water before being placed around the head of the patient.

Pike said this acts in the same way as the amniotic sack of a baby and helps the ultrasound waves penetrate the skull.

Dr. Zelma Kiss performed the first procedure using the technology in Calgary on Pharon earlier this year. Since then, six others have been completed.

According to Kiss, the previous procedure to fix this sort of tremor would have required a small hole to be drilled through the patient's skull, allowing a probe to pass through and burn the target area.

"The new part of this is the fact that we can do it without making an opening in the skull, without making an incision in the skin," she said. "So, far more people are potentially willing to undergo this kind of procedure that has lower risk."

A big perk of the new procedure, according to Kiss, is that it's day surgery.

She said generally the patient experiences instant results and can go home within 24 hours.

"I'm a million times better. Maybe exaggerated to you, but that's how I feel," he said.

Kiss said the hope is to one day use this technology to treat things like Parkinson's disease and epilepsy.

There are two other magnetic resonance guided focused ultrasound machines in Canada, both in Toronto.

Kiss said so far there have been approximately 1,000 procedures of this kind world-wide.

Her team plans to do two procedures per-month beginning in the New Year.

Those wishing to be considered for the tremor study can contact the nurse co-ordinator at 403-210-9537.