Save Alberta beekeepers: 2019 honey production down by half, says commission

Beekeepers across the province say honey production dropped by half in 2019 and are worried about the future of their industry in Alberta.

Beekeepers across the province say honey production dropped by half in 2019 and are worried about the future of their industry in Alberta.

The Southern Alberta Beekeepers gathered at a beekeeping operation near Okotoks on Friday for an annual meeting to talk industry and research updates and to look ahead at the upcoming season.

Landen Stronks is with a commercial beekeeping operation near Lethbridge, and calls 2019 the most challenging year his company has had.

"As beekeepers, we haven't produced a lot of honey last year and prices have been low for many years. And so a combination of low prices and low production has put us in a real difficult position," he said.

Stronks says a lot of this was due to the fluctuations in cold and wet weather being hard on the bees.

"When you don't have weather working on your side, you have nothing.… Last year, we produced half of our average," he said.

He says that in order to make sure the bee industry in Alberta is safe, there needs to be discussions around where the industry is going and how to increase the value of honey.

"You get another season like this and you will see people considering retirement or exiting the industry," he said.

"If people want to support the industry, buy honey from a local producer."

Grace Strom with the Alberta Beekeepers Commission — which represents more than 170 members — says they're asking the government to consider tailoring some programs to better help producers during these kinds of tough years.

"Some commercial beekeepers that I was speaking to said that they've had their worst year in 50 years," she said.

Strom says there are business risk management programs in the province, but unfortunately many of the beekeepers have opted out.

"We told (the government) that these business risk management programs are not working for us. So we are hoping that they have listened and that it will be something that they will decide to take a look at and make better for beekeepers," she said.

She says some options could be a financial payout to beekeepers based on the number of hives registered or the government helping reduce some of their costs.

"I really feel for these commercial apiarists because this could be a very important year for them — and if the weather works with you, you can recover. If the weather is not going to work with us, we're going to have a very difficult time," she said.

She adds that the commission also urges consumers to buy Canadian honey in order to support local industry.

"Buy 100 per cent Canadian honey. It is the most important thing you can do and supports our industry tremendously." 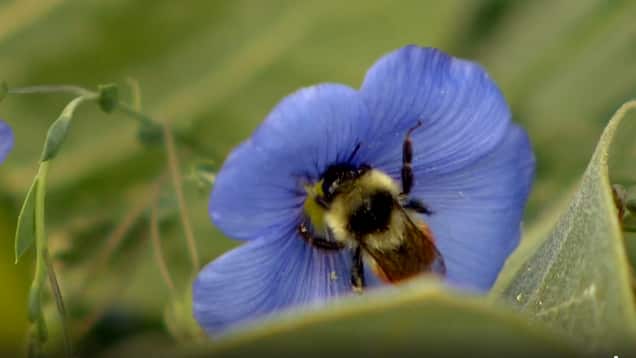 1 year agoVideo
2:14
A so-called bee boulevard was created a couple of years ago on Canyon Meadows Drive. Its goal is to attract all types of bees and butterflies and features native flowers, grasses and shrubs, as well as nesting habitats. 2:14
CBC's Journalistic Standards and Practices|About CBC News