When ice forms on a tree, it can make the perfect snap to post to Instagram or Facebook. There may be a tendency to simply call it hoarfrost, which for a social media posting probably doesn’t matter. But in the real world, on the roads, it does matter. A lot.

Both are great for photos, but one can be deadly 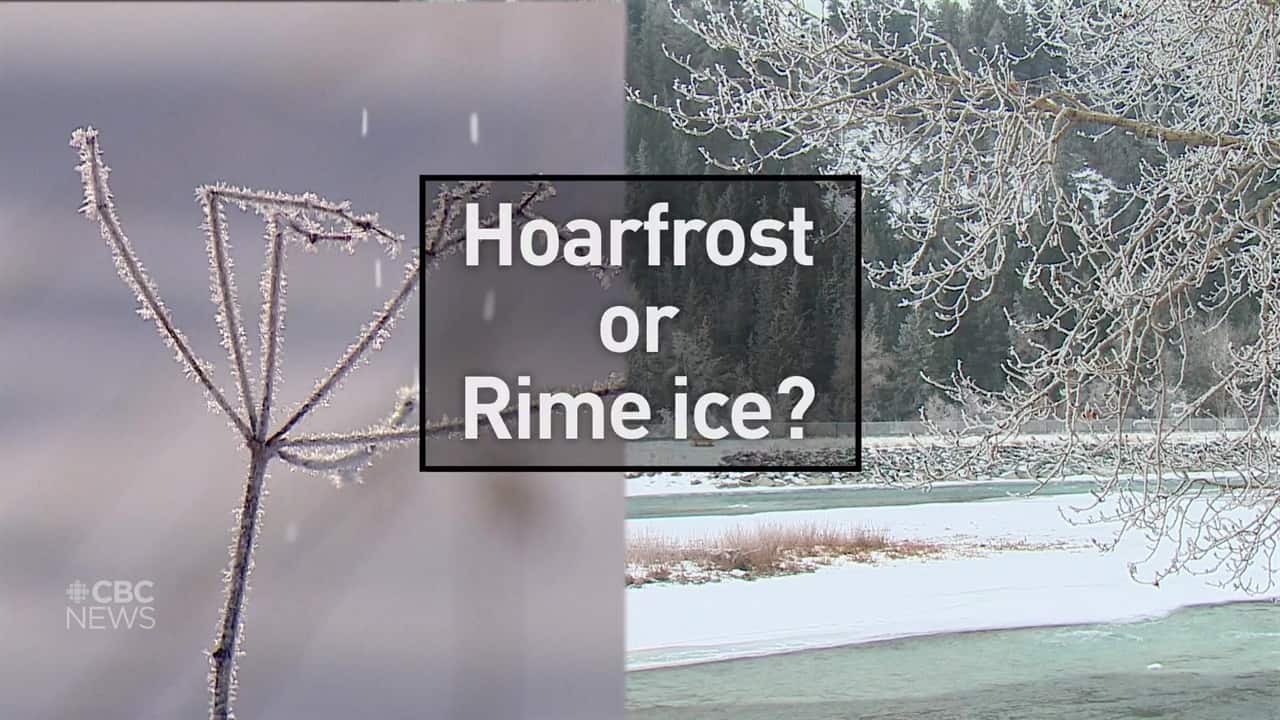 Rime ice vs. Hoarfrost: Can you spot the difference?

However, there may be a tendency to simply call it hoarfrost, which for a social media posting probably doesn't matter.

But in the real world, on the roads, it does matter. A lot.

"One is more dangerous than the other," explains Terri Lang, a meteorologist with Environment and Climate Change Canada.

"Looking at it, you may not be able to tell the difference. The difference is how it's formed."

"Hoarfrost forms under clear skies, clear and cold. Any moisture that's in the air goes from the gaseous state, meaning there is water vapour in the air and you can't see it. It skips that liquid phase and it goes right into solids," Lang says.

"So it goes from a gas to a solid, it forms right onto the tree. There is no melting in between."

"It usually forms when there is a lot of low cloud, foggy conditions. You can see the moisture particles in the air," Lang says.

"Those particles you see floating around in the fog are liquid. Those tiny particles can stay liquid up until –25 C. As soon as those liquid drops encounter something solid like a tree, a power line, a car, they immediately freeze onto it."

"You have to go right up to the tree and look at the way the particles are," she says.

"Rime ice looks more like droplets. They are heavier, the trees are weighed down. They are harder to break off. Hoarfrost is usually a lot lighter, more feather-like. You can just blow it off."

Which one can be dangerous?

"What makes rime icing dangerous, when the fog stays for days, it can build up and it's really, really heavy, whereas hoarfrost on a branch, you can just blow on it and it blows away. Hoarfrost is so light. That's the big difference. Rime ice can cause big power outages or even bring down airplanes, when they fly through a cloud with a lot of these particles," Lang says.

"Rime icing can be quite dangerous because of the ice conditions. They can develop very, very quickly."

Where do you see each one?

"We tend to see hoarfrost where it gets colder, so you wouldn't see it as much on the [B.C.] Lower Mainland. We tend to see it more on the prairies," Lang explains.

"Rime icing can occur pretty much anywhere the temperature goes below freezing. We see the worst events when the temperatures are –4 C to –7 C. If it gets colder than that, the air gets drier and we don't see the fog banks as much."

Rime ice is more common in the prairies and in higher elevations like mountain ranges.

"They both give incredibly beautiful pictures. That's what attracts everybody," Lang says.

"But there is an important distinction because there can be consequences."

With files from James Young