Historic treaty signed among 10 First Nations and tribes in Banff

First Nations from Canada and tribes from the U.S. gathered Thursday in Banff to sign a cooperation agreement called The Buffalo Treaty. 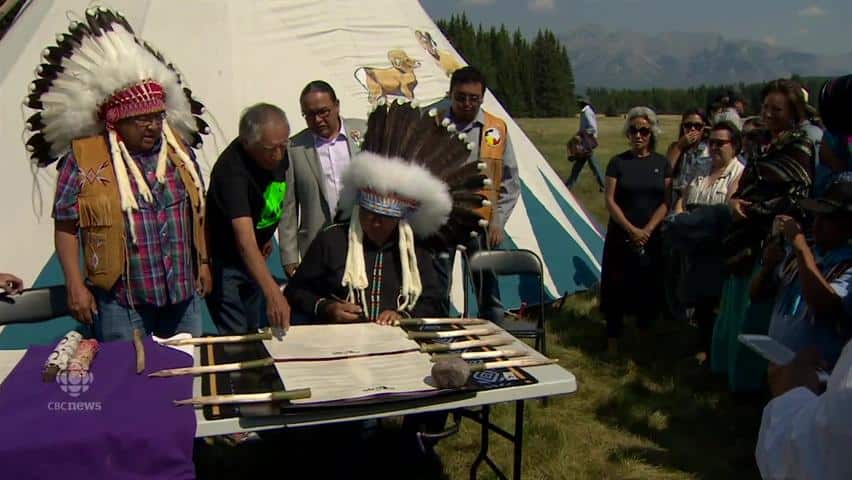 5 years ago
1:28
Ten First nations and Tribes were in Banff to sign a cooperation treaty in link with the return of the bison in Banff National Park. It was the first time in more than 150 years that such a treaty was signed. 1:28

Since the founding of Canada, the common practice is for treaties to be signed between First Nations and the federal government, but that wasn't always the case.

On Thursday, First Nations from both sides of the Canada-U.S. border gathered in Banff to welcome the Stoney Nakoda and the Samson Cree as signatories to a treaty that harkens back to a time when these kinds of agreements were more common.

The Buffalo Treaty, as it's called, creates an alliance among the 10 groups, aimed at:

The agreement stemmed from proposals to bring free-ranging bison back to the areas like Banff National Park and aims to restore links that existed when bison roamed free throughout the territories of the signatories.

"For me, it's historic," says Chief Ernest Wesley of the Wesley First Nation (Stoney Nakoda).

The Buffalo Treaty was first signed in September 2014 in Montana by eight nations:

More signatories are welcome to join.

"The treaty is open," said Leroy Little Bear, who organized the Banff ceremony. "Other nations can sign on."

One visiting First Nation had a bad surprise on the morning of the signing — the canvas surrounding the poles of the Samson Cree Nation's tipi was stolen.

Most nations set up camps the day before on the Indian Grounds to combine the signature ceremony with the Stoney Nakoda Family Camp event.

The First Nation from Maskwacis, Alta., had brought a brand new white canvas to mark the signing of the treaty, but it disappeared overnight.

"To turn a negative into a positive, our chief said that we are in Treaty 7 territory, and our traditional practice is to gift. So we have gifted our tipi to somebody who really wanted it," said Beverly Crier.