Motorists stranded for hours Tuesday on an icy stretch of the Trans-Canada Highway in southwest Alberta got a temporary break from their standstill stress in the form of a private concert by a famous trumpeter.

'It was very cold and very snowy out there, extremely difficult conditions to play trumpet in' 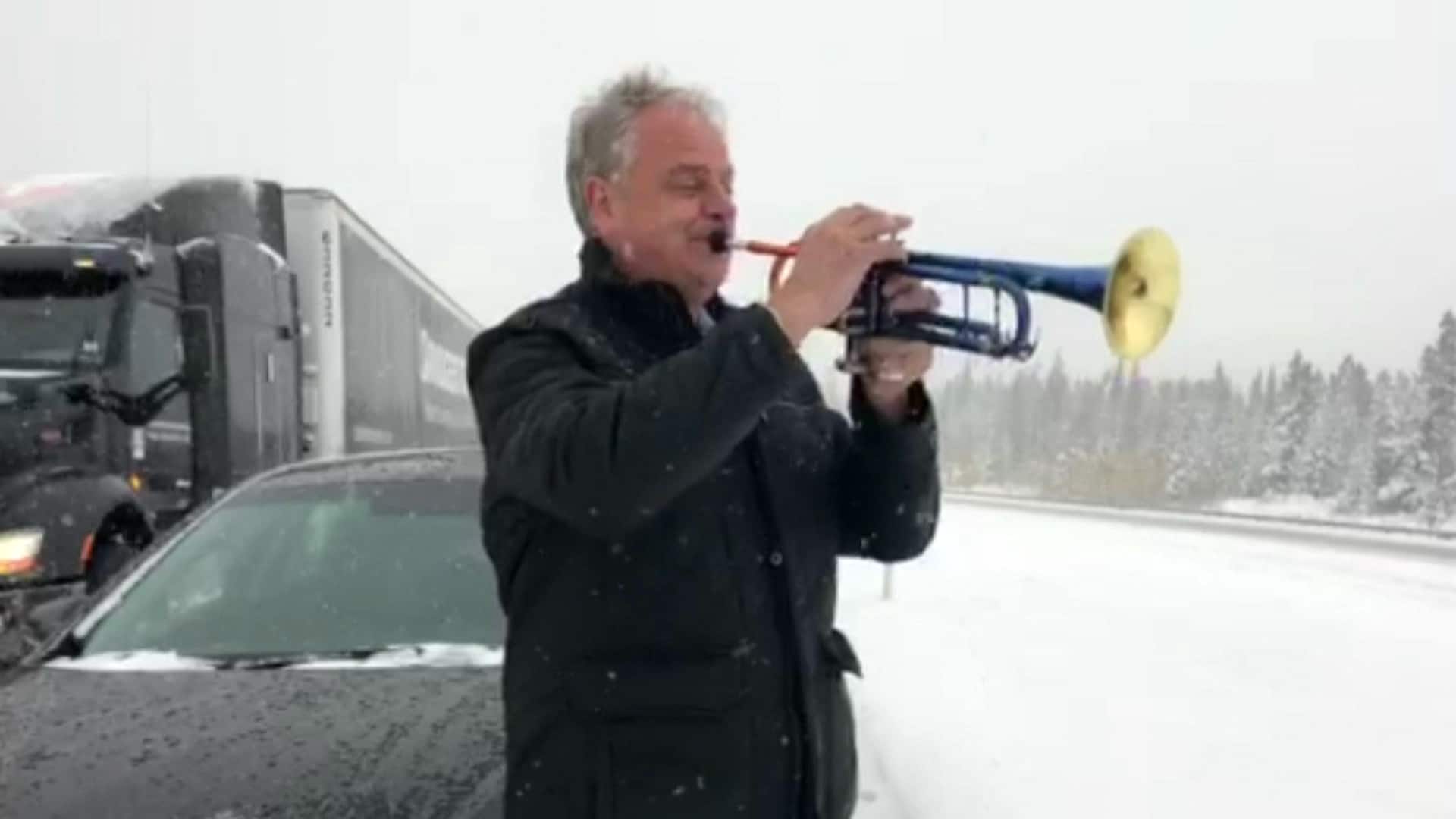 Motorists stranded for hours Tuesday on an icy stretch of the Trans-Canada Highway in southwest Alberta got a temporary break from their standstill stress in the form of a private concert by a famous trumpeter.

Jens Lindemann, a professional trumpet soloist who has taken the stage at Carnegie Hall and played for Queen Elizabeth II, was in one of the hundreds of cars parked on the span of Highway 1 east of Canmore.

Lindemann said his rental car didn't move so much as an inch for about 10 hours after multiple traffic incidents, including a jackknifed semi-trailer, made the road impassable.

"During the day, it was a little funny at first because I grabbed my trumpet and started playing some trumpet fanfares and O Canada and people were getting out of their cars and talking to each other. There was nothing else to do," he told the Calgary Eyeopener on Wednesday morning from his hotel room in Banff.

His fanfares were met with blaring horns as opposed to the usual cry of "charge" from his audience, and Lindemann said he was just trying to make the best of the situation.

And he was careful to use a plastic mouthpiece, to keep anything from freezing to his instrument.

"I would like to add for the record that if anybody was worried about the tone quality, it was very cold and very snowy out there, extremely difficult conditions to play trumpet in," he said, laughing.

As an experienced Albertan, Lindemann, who was born in Germany but raised in Edmonton, knew to have a full tank of gas before heading out on the road and to be prepared for the winter weather. Not everyone was as prepared as he was. He said motorists were left to their own devices, with no help offered by police or any other emergency agency.

"I was so proud to know so many Canadians on the road who were helping each other yesterday, but it must also be noted that … there was not one emergency services vehicle that checked on anybody in that line of cars for 10 hours," he said.

"Ninety-five per cent of people knew what to do and we made the best of the situation, and they looked out for the other five per cent. So I'm just glad everybody seemed to have gotten through the night," he said.

Lindemann​ said he was one of the lucky ones who was able to U-turn back to Banff  late Tuesday night once some truckers pulled over just enough so they could get by. ​