Calgary's newest park is located on a parkade roof

High Park, in Calgary's Beltline, is six storeys off the ground.

0.8-hectare High Park is 6 storeys off the ground in Calgary's Beltline 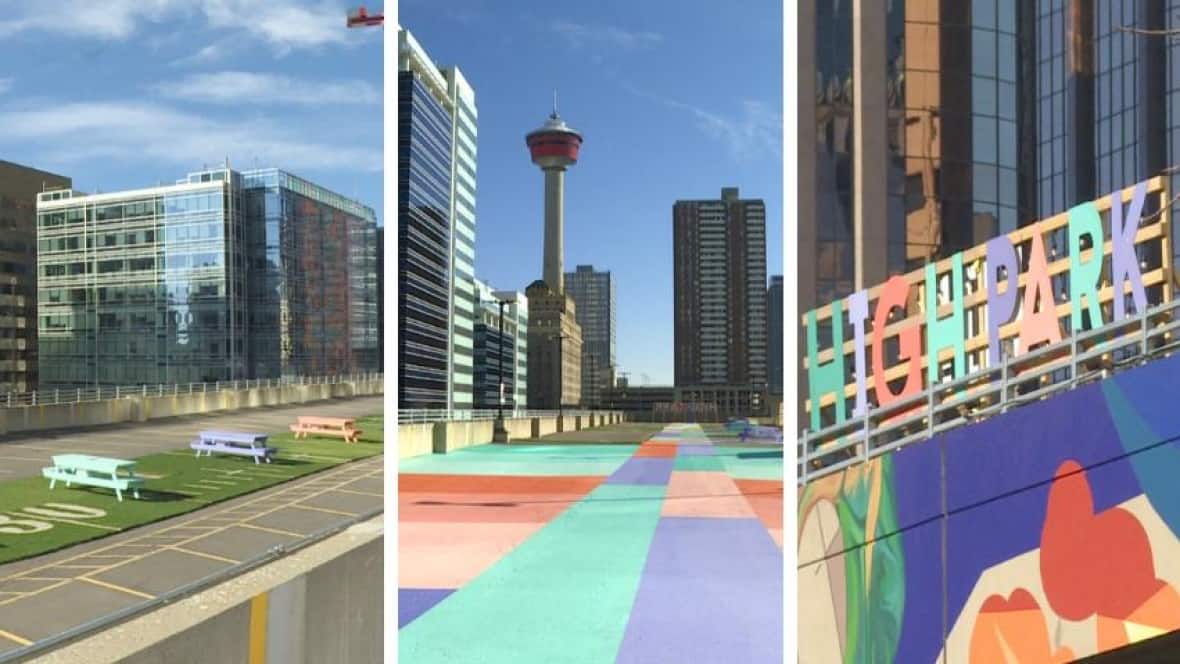 Calgary has a new park, and it's six storeys off the ground.

High Park, located on the top floor of the City Centre Parkade at 340 10th Avenue S.W., opened on Monday.

Peter Oliver, president of the Beltline Neighbourhoods Association, said while planning for the park began in late 2019, before the pandemic, it provides a solution to help people meet safely outdoors.

"We're inviting Calgarians to come up and escape above the rooftops of the warehouse buildings in the Beltline … with full sun exposure, fresh air, and just an escape from the street below," he said.

"People are going to need a place to escape, but also come together to meet as a community with friends, and to also stay safe."

The 0.8-hectare (two-acre) park features a 200-metre boardwalk, and colourful distanced picnic tables for people to gather. Oliver said he anticipates it will be used for everything from downtown workers meeting for lunch, to community events like rooftop yoga classes or concerts.

The councillor said the park is a great way to activate unused parking space as a place for physically distanced gathering.

The project was paid for through the Beltline Community Investment Fund, and is in phase one of a multi-year pilot project exploring the creative use of public space. The groups behind the project, which include the neighbourhoods association, the Calgary Parking Authority, and the Beltline Urban Murals Project, will be gathering feedback on how the park can be improved.

"This is just a parking lot and serves only one function today but going forward it can perhaps serve many uses for the community and for the city," Oliver said.

The park can be accessed on the south side of City Centre Parkade on 10th Avenue, by taking the main entrance hallway to the elevators which lead to the roof, or through the Plus15 network through Gulf Canada Square by following signs for the parkade.

It's subject to the same rules as other city parks, such as no smoking or drinking and users must clean up after their pets. It's also available for rent from the Calgary Parking Authority for special events.