'It might be too bold a name for me, but it tops ‘Hitman’ anyway'

The former professional wrestler was given his Indigenous name at a private event in a teepee on the southwest Calgary campus that included a smudging ceremony, face painting and a drum group.

Hart said he and his family have always had a strong kinship and respect for Indigenous communities.

His father, Stu Hart, founded Stampede Wresting in Calgary in the late 1960s.

"My dad ran a lot of different shows on different reservations across Alberta and Saskatchewan and British Columbia," he said. 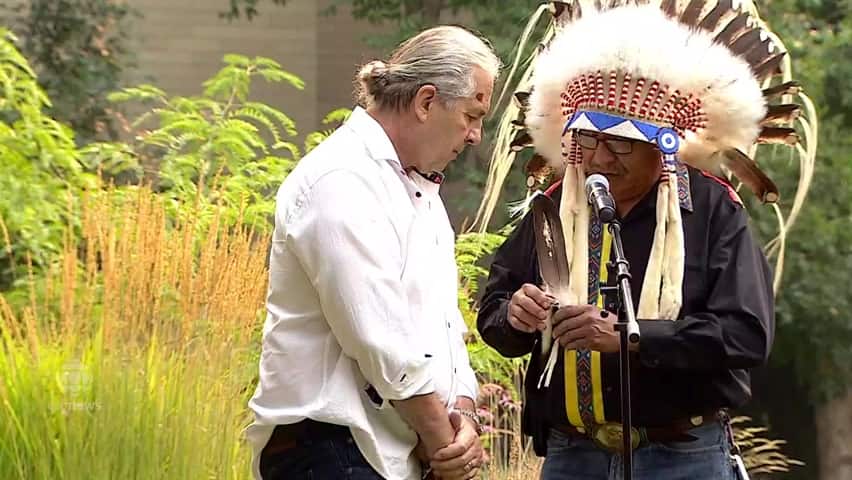 3 years ago
0:26
Bret Hart got a rare Indigenous honour Thursday morning, receiving a Blackfoot name from a Siksika Elder at Mount Royal University. 0:26

Father would be proud

"I know that this day would have been special to him," he said. "I think if you live on the Prairies, you understand a lot of the hardships that the First Nation people have endured through all these years."

Hart said there had been a plan to honour his father and other members of the large Hart family many years earlier, but it didn't come to pass.

"It was kind of a lost moment and I feel that I'm here today to kind of pick up that gauntlet and bring it back to life. And I can feel that both my mother and my father would be very proud of this moment," he said.

Hart said he is honoured by his new Blackfoot name.

"I think it's a great name. It might be too bold a name for me, but it tops 'Hitman' anyway," said Hart, who was known as Bret (Hitman) Hart during his five decades in the ring.

'Goes right to the heart'

"I've won world titles and had a lot of different things bestowed upon me and I appreciate all of them, but this is one that goes right to the heart."

Siksika elder Clarence Miiksika'am says the naming ceremony is a very important ritual in his culture.

He said names come to him as he seeks the guidance of old warriors through prayer, dreams and visions.

"The name that I chose for Bret goes back to an old warrior. His name was Iron Shield, not because he had a shield of iron, but his spirit was like iron," he said.

"So I chose that reference because he was surrounded in battle, and they tried to take him down with arrows and knives. And the great war chief said 'we cannot take this chief down.'"

Miiksika'am said the story behind that name inspired his choice for Bret.

"But I will seek an appropriate name just as powerful as that name. That's why I gave him Iyiikitapinna: Courageous Chief."

Hart, who is also an actor, writer and philanthropist, received an honorary bachelor of health and physical education degree earlier this year from MRU.

The university says it is committed to indigenizing the campus and increasing respect for Indigenous ways of knowing.

With files from Julie Debeljak