In the ring, the 26-year-old is known as Mean Hakeem — the heavy right hitter with a punishing liver shot and a wily ability to goad his opponents into eating his back kick.

'I got no BS. I just go straight for the knockout,' says 26-year-old Hakeem Dawodu

It's a mean rotation of jiu-jitsu, Muay Thai kickboxing, wrestling and shadowboxing, with some strength conditioning and skills training mixed in for Calgarian Hakeem Dawodu.

The daily regimen is exhausting, but it beats Dawodu's old cycle of picking street fights and rotating in and out of juvenile hall.

And it's paid off. The 26-year-old just featherweight signed a four-fight contract with the Ultimate Fighting Championship.

"I'm only the second guy out of Calgary to actually get put into the UFC," the 5'8" athlete said. "It's a huge deal."

From probation to pro MMA

Dawodu got his first taste of MMA while on probation. Searching for an outlet to blow off some steam, Dawodu wound up at Mike Miles Muay Thai gym in southeast Calgary.

"My probation officer at the time, she wrote this off as anger management," which satisfied one of his probation requirements, he explained. 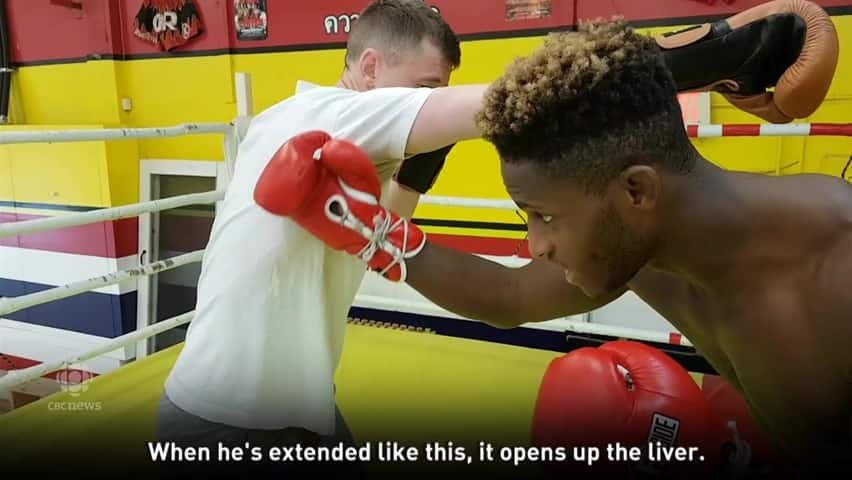 Hakeem Dawodu demonstrates some of his favourite techniques in the ring

Today, Dawodu puts in anywhere from four to six hours each day, pushing his body's limits through a rigorous training schedule designed to keep him light enough, but fierce enough, to compete in the under 66 kg, or 145 lb, weight class.

The sport demands a level of discipline, work ethic and mental fortitude that has helped him turn his life around, he said.

"Becoming a martial artist teaches you self-control, how to handle situations with a calm mind. It just kinda taught me how to be a man," he said.

Now he believes his experience can help inspire others.

"A lot of the younger MMA guys are now looking at me going, 'You know what? I think I can do the same thing.'"

'Straight for the knockout'

In the ring, he's known as Mean Hakeem — the heavy right hitter with a punishing liver shot and a wily ability to goad his opponents into eating his back kick.

"I got no BS. I just go straight for the knockout," he says.

But after a big fight in the octagon, there's nothing regular Hakeem looks forward to more than ripping off the gloves and digging into a creamy cheesecake.

"I don't know what it is. There's just something about a cheesecake that really gets me," he laughed.

In the daytime, you'll catch him training at various gyms throughout the city, including Champions Creed, Teofista Boxing, Athlete Factory, or indulging his other guilty food pleasure at one of Calgary's famed burger joints.

Just don't ask him which his favourite is, because he's not looking to start a fight.

"Let me say this," he said. "After the next big fight, I'll probably definitely hit up Clive Burger."

With files from Paul Karchut and the Calgary Eyeopener