Godfred Addai-Nyamekye says his 2013 incident in Calgary reveals recursive patterns of injustice in Canada — and a failure by the judicial and legal system to deliver justice.

Amidst heavy scrutiny of police reform and ongoing systemic racism in America, a Calgary man says his 2013 incident reveals the same recursive patterns of oppression in Canada — and a failure of the legal system to deliver justice.

"It happened here. It happened to me. I'm a victim," said 32-year-old Godfred Addai. "I'm a living testimony — I could have been killed that night."

Addai was dropped off far from his home in the dead of winter by one constable and then beaten by another officer, which was caught on video.

One of the officers involved has since been convicted of an unrelated aggravated assault while the judge presiding over Addai's trial for assaulting a police officer rejected the other officer's version of events. Addai was found not guilty.

Marc Serpa Francoeur, a filmmaker with Lost Time Media, has been tracing Addai's case for years as part of a documentary focused around alleged brutality and accountability issues within the Calgary Police Service. That documentary, titled Above The Law, broadcasts July 11 on CBC, and online for free through CBC Gem.

"[Addai] has been yelling in the wilderness for years now," Serpa Francoeur said.

This story is based on court transcripts, interviews and information provided by Lost Time Media.

It was three days after Christmas 2013 in the early morning hours. Addai was in a vehicle with some of his friends in the southeast community of Ramsay.

It was a frigid night, with temperatures plunging to –28 with the wind chill. The group's vehicle became stuck in the snow.

While all were standing outside assessing the situation and attempting to manoeuvre the vehicle, a marked Calgary police vehicle pulled up nearby. Two constables, Ben Donockley and Kyle Kwasnica, stepped out.

Donockley later alleged Addai "became verbally and physically aggressive" toward one of his friends. The officers — including Sgt. Clint Grabowski, who had by then arrived on the scene — took Addai down. His lip split open as he hit the ground.

The officers detained Addai and put him in the back of the police vehicle. The officers said they issued Addai with a ticket for public intoxication, though Addai maintains he hadn't been drinking and denies he received the ticket.

Donockley later admitted at trial that he had never included in his written notes any indication Addai smelled of liquor.

Having seized his identification, the officers knew where Addai lived. But instead of driving him home, they took him to the East Village — in the opposite direction — and left him there.

Violent arrest in the East Village

It was approaching 4 a.m., and Addai was not dressed for the freezing temperatures, wearing only a light shirt, a track suit and sneakers with no tuque or gloves.

In a recording shared with CBC News by Lost Time Media, acquired via a FOIP request of the Calgary Police Service, Donockley is heard calling police dispatch after dropping Addai off in the East Village.

"You may be getting a call from a [drunk individual]," Donockley said in the call. "We just dealt with him, issued him a ticket. He said he was going to call 911. But you've got no reason to, he's just a drunken fool."

Donockley tells dispatch to ignore Addai, adding that he will walk home — a distance of more than three kilometres.

Freezing and extremely upset in an East Village that in 2013 was still a construction zone, Addai sought help. Addai had two cellphones with him — his own and his friend's — but his phone had died.

Not knowing his friend's password, he was unable to call a friend or a cab for a ride. He was, however, able to call 911.

"Hello, Calgary cops just picked me up and left me here," Addai said in the call, attempting to explain the situation but growing increasingly frustrated.

Addai became further agitated, and the operator hung up.

Freezing, he called again. This time, Const. Trevor Lindsay was dispatched to the scene. By this point, more than 15 minutes had passed since Addai was dropped off.

Two minutes after he arrived, Lindsay called for assistance. He said he had become involved in a "physical altercation" with Addai and had deployed his Taser.

Later, a police helicopter arrived. Video from the helicopter shows the incident as it unfolds.

Lindsay is seen attempting to pull or drag Addai via his handcuffs. Addai falls into the snow and Lindsay falls on top of him.

Soon, Lindsay punches Addai in the back of the head before repeatedly kneeing him in the back, head and neck. 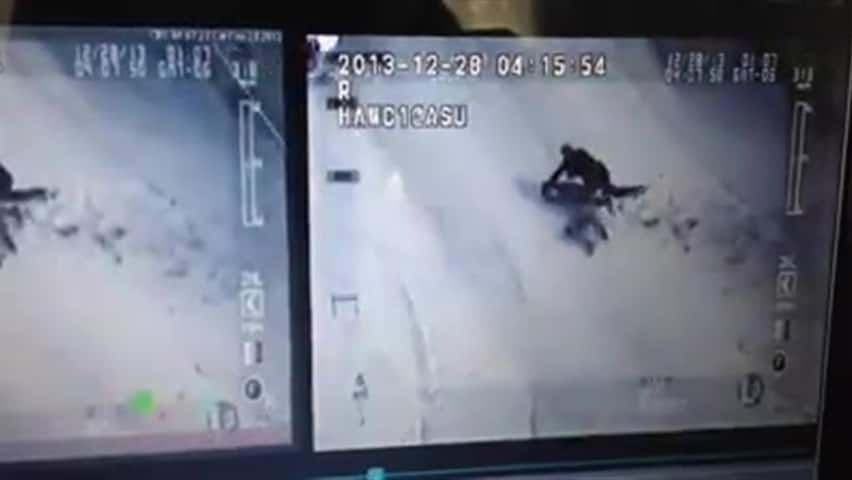 After the incident, Addai filed a complaint against CPS, which was provided to CBC News.

"I was [handcuffed] and was beaten to a point where I was extremely weak and even more cold," the complaint reads. "I then heard [Lindsay] call dispatch, so I tried to yell for help through the radio. [Lindsay] told me, 'Shut the f--k up … I am going to kill you.'"

During Addai's trial, Lindsay denied having said those words to Addai.

Addai said he was transported to a processing facility. When he arrived, he was treated roughly, his arm twisted while in handcuffs and his face pushed up against an elevator wall, he alleges.

Serpa Francoeur shared a FOIP request with CBC News revealing that the processing video had been deleted.

According to the document, the video was deleted after a 13-month retention, a process CPS claims is routine when a complaint has not been filed.

But upon learning of the video's deletion, Addai said he didn't wait 13 months to file his complaint. His initial complaint, provided to CBC News, was filed one month after the incident took place.

"If they had investigated my complaint, they would have had all those videos," he said.

Tom Engel, the lawyer now representing Addai, criticized the process that unfolded around the complaint.

"This is a common tactic of police services that lack integrity when it comes to processing complaints," Engel said. "They look for ways to truncate the complaint, or restate the complaint so that they can either ignore them or dismiss them improperly.

"That's what CPS did and has done in a lot of cases."

In a statement provided to CBC News, a spokesperson with CPS said that after concerns were raised about the initial investigation into the incident, CPS had a different unit reinvestigate to ensure the investigation was "thorough and complete."

"That unit has completed their investigation and is in the process of sending their evidence and conclusions to the Alberta Serious Incident Response Team for a second independent review of the file," the statement reads.

"We have also almost completed an investigation into how the first internal investigation of the incident was conducted, but need to wait for ASIRT to complete their review of the criminal investigation before we can proceed with any disciplinary decisions under the Police Act."

Walk a couple of blocks and 'cool off'

Addai was charged with assaulting Lindsay, though he was acquitted at trial.

"He was found not guilty in a very dramatic way by the judge," said Engel. "[The judge] was extremely critical of the police."

During the trial, Justice Pat McIlhargey questioned Donockley, asking why he would take Addai to the East Village when driving him home would have taken the same amount of time.

Donockley said the logic was that Addai would walk a couple of blocks and "cool off."

"Well, with a –28 wind chill, he certainly would cool off," McIlhargey said.

In delivering his judgment, McIlhargey questioned the credibility of both Donockley and Lindsay, saying that he was satisfied on the evidence that Addai never struck either officer nor made contact with them, except when it was initiated by the officers.

After the trial, Engel eventually took over Addai's case.

He said it was a "real battle" with the CPS to ensure they were investigating every aspect of Addai's complaint.

"It became very quickly apparent that these guys were trying to sweep the more significant issues under the carpet," Engel said.

The Law Enforcement Review Board, a board that hears appeals on decisions regarding complaints levied against officers, was so concerned with how the process surrounding Addai's complaint unfolded, Engel said, that it triggered a 2018 inquiry.

The inquiry delved into the investigative process undertaken by CPS surrounding Addai's complaints.

In 2019, Lindsay was convicted of aggravated assault — but related to a separate 2015 incident.

Lindsay remains relieved from duty without pay at this time.

Addai's case, however, remains bogged down in the legal system.

"There's this fundamental question," Serpa Francoeur said. "Godfred always says, 'What do you see in his video that's so different from what you see in mine?'"

Engel said the LERB has put the inquiry on hold pending the results of the internal CPS investigation.

Donockley, the officer who left Addai in the East Village, has resigned from the Calgary police. CPS would not confirm the reasons behind his departure.

In Alberta, police officers can resign if facing discipline and maintain a clean record.

Kwasnica's case saw some resolution in 2017, but only related to the officer's failure to take notes — which were partly excused by former police chief Roger Chaffin due to Kwasnica's stated "severe sleep apnea."

Kwasnica received an official warning on his file for two years as punishment for the incident. He remains on active duty.

Addai also has filed a civil suit against the CPS, but that, too, has been put on hold pending the results of the investigation.

CBC News has reached out via CPS to the officers involved for comment.

"It's that old saying: justice delayed is justice denied," Engel said. "Obviously, he's very upset about what happened to him on the day he was arrested, but now adding on that upset is the failure of the system to properly investigate his complaint.

"So he's got a right to be extremely upset, frustrated, disillusioned."

Addai said that what happened to George Floyd recently in Minneapolis was tragic. But he says that similar cases of brutality and racism take place in Canada all the time.

"It happens here all the time and no justice is served. Enough is enough, you know?"

Above The Law, a documentary that examines alleged brutality and accountability issues within the Calgary Police Service, airs July 11 on CBC at 8 p.m. and online through CBC Gem.

With files from Drew Anderson and Meghan Grant