After Calgary protest in his honour, what's next for Addai case?

Godfred Addai, a Black Calgarian who was punched and kicked repeatedly when he was arrested by police in 2013, has been waiting for justice.

The crowd called for justice in the case of Godfred Addai, a Black Calgarian who was punched and kicked repeatedly when he was arrested by police in 2013.

In that time, Calgary police say it's been re-investigating, looking into any potential criminal offences by officers involved.

CPS says the process takes time but others say police are protecting their own.

CPS says after concerns were raised from the first investigation, a separate unit within the service re-investigated.

Insp. Scott Todd says the Anti-Corruption Unit was selected to give the case a second look and it's been handed over to the Alberta Serious Incident Response Team for independent review.

Todd says the Anti-Corruption Unit was chosen because they had handled police-involved investigations in the past. Including ones involving other Calgary police members.

When asked if that could still be seen as a conflict, Todd said the service is working with what they have.

"We recognize that the inherent perception in our investigative process, the concerns of the public, ultimately the police investigating the police. We have to operate within the framework that's afforded to us by the Police Act and service regulations," said Todd.

CPS said in a release that a re-investigation into how the first internal investigation was handled is near completion and should be done by the fall. 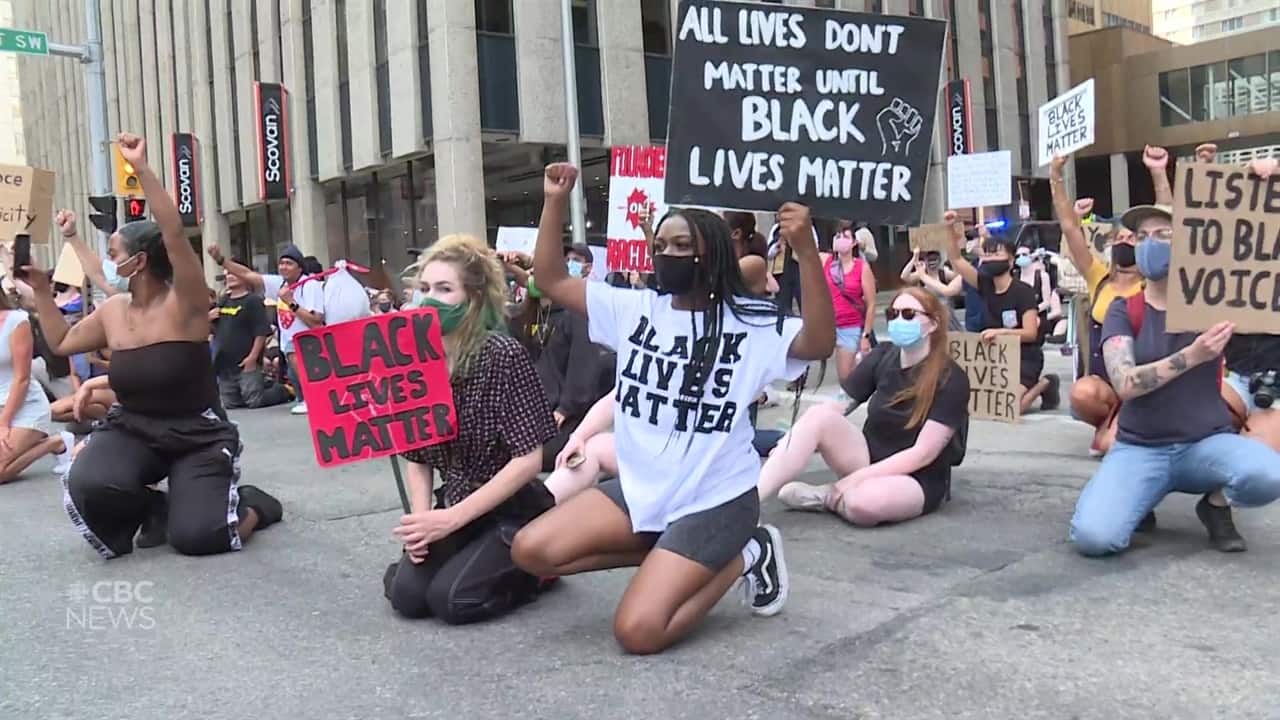 3 months ago
0:51
Calgarians hit the streets demanding police changes in support of a Black man who was violently arrested in 2013. 0:51

That's around the same time a disciplinary hearing for Const. Trevor Lindsay, one of the officers involved in Addai's case, is scheduled. CPS wrote in a release that "he will face non-criminal charges of using inappropriate force in the arrest. This hearing will decide what discipline, up to and including dismissal, is appropriate in this case."

Adam Massiah, CEO of the United Black People's Allyship, who helped organize the protest last week, said he doesn't have faith in any investigation conducted by police looking into their own officers.

Todd admitted it should not take years to deal with complaints against its officers.

In a statement, executive director of the Calgary Police Commission Heather Spicer agreed.

"The accountability process at the Calgary Police Service has room to improve. A significant focus of the commission's Complaint Oversight Committee in recent years has involved identifying and overseeing the changes necessary to resolve complaints in a more timely way," she said.

"With the oversight of the commission, CPS has made it a priority to streamline the complaint investigation process as much as possible and to clear file backlogs."

Spicer also said the commission and CPS have advocated to the province to amend the Police Act to establish a complaint system that reduces the length of the process and addresses community concerns about accountability.

"We will continue to make this a priority as the province accelerates these reforms," she said.

Why can't we conduct the public inquiry now? ... Let's get it going.- Tom Engel, lawyer

Addai's lawyer, Tom Engel, said most of the information on the police investigations isn't new to him and that it's time to move the case forward.

He said initially there was supposed to be a public inquiry, however, CPS asked for time to re-investigate.

It's been years since then.

Engel said this September, the Law Enforcement Review Board will consider what needs to happen next.

Engel said the board shouldn't have to wait until the CPS investigations are complete to call an inquiry.

"There's a couple of questions. One is, what's going on, when is this all going to be done? The second one is, why do we have to wait for it to be done? Why can't we conduct the public inquiry now? Which, of course, wouldn't happen immediately. It will have to be scheduled down the road. My position is, that, yes, there is no reason that there not be a public inquiry. There's going to be a public inquiry in any event. So let's have it. Let's get it going," said Engel, adding an inquiry will bring details of the case to light.

"It will have police officers right up to the chief, or the former [chief], to testify and all of those people who played a role will have to testify under oath and be subjected to cross-examination."

"The police services in Alberta are on board with this. The police union, at least the Edmonton Police Association, are on board. I don't know of any stakeholders who are not on board with that. They want out of investigating complaints against themselves because they know the optics are bad. And just having police investigating complaints against themselves creates a reasonable apprehension of bias."

Tahirih Foroozan is a reporter with CBC Calgary.