One of two new pieces of public art is on display for drivers travelling west out of the city as part of the new interchange at the Trans-Canada Highway and Bowfort Road N.W.

Sculptures based on Blackfoot traditions using stones found only in Alberta 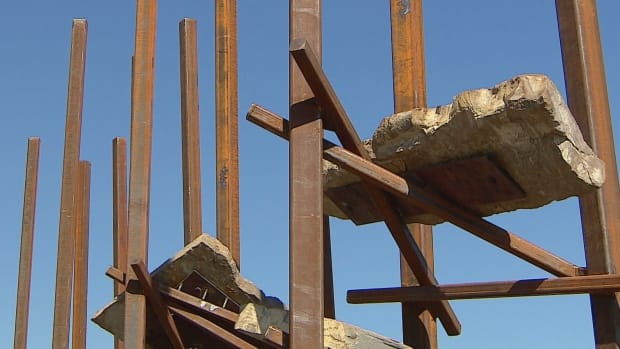 4 years ago
0:41
One of two new pieces of public art is on display for drivers travelling west out of the city as part of the new interchange at the Trans-Canada Highway and Bowfort Road N.W. 0:41

If you're travelling west out of the city, you'll notice some new scenery by the roadside.

One of two new pieces of public art is now on display as part of the new interchange at the Trans-Canada Highway and Bowfort Road N.W.

The Bowfort Towers on the south side of the interchange were designed by artist Del Geist, who is based in New York, N.Y.

Iley said Geist drew inspiration from the Blackfoot people, and the towers capture the "essence, personality and history" of the area.

"Those four towers relate to the Blackfoot cultural symbolism that talks about the four elements, the four stages of life (and) the four seasons," Iley said.

The towers use a uniquely Alberta construction material in their design.

Each sculpture incorporates Rundle rock stones, which are found only in Alberta. The stones were gathered from the personal collection of geologist Louis Kamenka at the Kamenka Quarry near Canmore.

If you look closely at the stones, you can see the imprints of fossils and even subtle ripples in the rock from the prehistoric river they once laid in.

"I think they'll become landmarks in much the same way that if you think about the arctic landscape and the kind of landmarks that inukshooks become," Iley said.

Art by the numbers

Iley said the second half of the installation will be reminiscent of small drumlins, which are oval earth formations left behind by glaciers.

"Those will be an introduction to the Foothills of the Rocky Mountains that people will be driving into as they exit the city towards the west," Iley said. "And it's going to be using the earth that's already been moved around on the project."

From the Travelling Light (better known as the big blue ring) to the Canada 150 RedBall project, public art is a part of Calgary's modern landscape.

Iley said one per cent of the capital budget for every infrastructure project is dedicated to public art. With the cost of the interchange project coming in at $71.7 million, both the Bowfort Towers and the yet-to-be-completed drumlins came in under budget at $500,000.

"Well I think, as you say, it's in the eye of the beholder," Iley said. "And I think one of the really interesting things is, at the moment, we have a number of different projects going on in transportation around the city. And so I think people will find different things for different tastes as it were."