The Calgary Underground Film Festival (CUFF) turned up the good and turned down the suck Thursday night at a special 15th anniversary screening of the Calgary cult classic, Fubar. The 2002 mockumentary features the adventures of Terry and Dean — two Calgary headbangers who lived to drink, fight and break stuff.

Dave Lawrence, who played Terry in the 2002 mockumentary, and the director thrilled fans at the screening 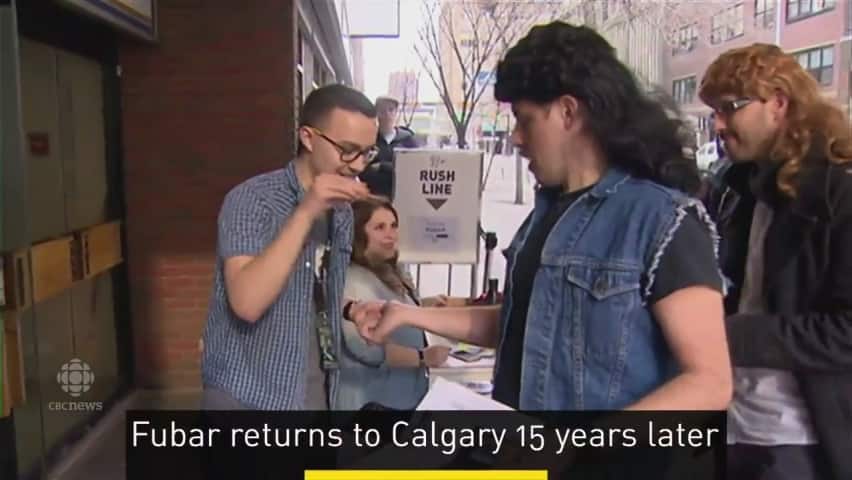 The Calgary Underground Film Festival (CUFF) turned up the good and turned down the suck Thursday night at a special 15th anniversary screening of the Calgary cult classic, Fubar.

The 2002 mockumentary features the adventures of Terry and Dean — two Calgary headbangers who lived to drink, fight and break stuff.

Dave Lawrence, the actor who plays Terry in the film, thrilled fans at the Globe Thursday night for the screening, which is part of CUFF, along with director Michael Dowse.

Lawrence says while he wasn't a headbanger himself in his youth, there were a few of them at his high school who fascinated him.

"I was pretty interested in hearing them talk and what they were all about," he told the Calgary Eyeopener.

"They came to school with wet hair and a smoke behind the ear and asked the questions that would really upset the teacher like, 'When's lunch?'"

Lawrence and friend Paul Spence, who plays Dean, were motivated to make the movie out of frustration from trying to get roles in Alberta as an actor.

They took their headbanger characters and made their own movie, along with Dowse, just to create the roles. The mockumentary format was chosen because they "had absolutely no money."

The entire film was made for around $10,000. Lawrence says the hair extensions alone cost $600 each.

"We didn't have a lot of money, the room on the credit cards was the budget to shoot the show," he said. "Once the credit card was maxed, that was our budget."

WARNING: This video has graphic language

The film was shot in and around Calgary and all of the dialogue in the film was improvised. Their only guide was an outline of scenes so they knew what props would be needed for each scene — like a piece of wood to smash a bus shelter.

The film was followed by a 2010 sequel titled Fubar: Balls to the Wall where Terry and Dean head north to make make money in Alberta's oilpatch. The pair are coming back once again later this year in an eight-part series running on Viceland.

"I think anyone who's gone camping and drank a bunch of beer and enjoyed sort of being a bit reckless in their youth, or even when they aged, can appeal to that sort of, what we call, stunted adolescence," he said.

Lawrence says despite never making that $10,000 back, the movie provided him with a lot of opportunities. And every once in a while, someone on the street recognizes him as Terry.

"Usually they're like, 'Dave, sorry, you're not nearly as cool as Terry,' and then they are usually disappointed. And they are like, 'I wish I hadn't met you because now I see that Terry is not entirely real," he said.