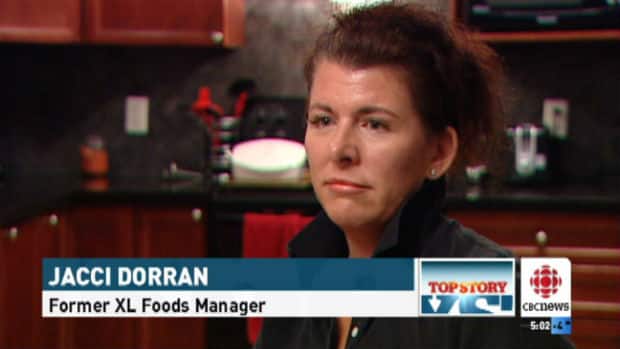 The comments come as the agency works to get the XL plant in Brooks, Alta., up and running again

Dorran said she watched as the CFIA was created in 1997 and followed its evolution.

"It used to frustrate me to no end," said Dorran, who was in charge of quality assurance at seven plants.

She didn’t work at the Brooks facility, but said that in other processing plants federal inspectors didn't spend enough time on the line.

"It was very common that my staff was training the CFIA," said Dorran.

"They weren't necessarily going out into the plant. They might just show up there and read the paper, do the crossword puzzles," she said.

"They need to be helping the meat industry so we don't get to this point."

Other people in the food safety industry have similar stories.

University of Alberta microbiologist Lynn McMullen said the CFIA plays an important role, but the plants also have to take some responsibility.

McMullen said that means better training for plant workers — so they know how to prevent contamination in the first place.

She said the problem started when the CFIA started requiring plants to have "hazard analysis critical control point" (HACCP) plans.

"The new philosophy is give us a bunch of paperwork and then we spend more time filling out paperwork on how we're supposed to fix it other than actually being out on the floor and fix it ourselves — that really bothered me."

HACCP is seen as a turning point in the industry — when plants became responsible for monitoring and ensuring food safety.

The CFIA audits that paperwork.

"How is it getting better? They’re not. After Maple Leaf, they were supposed to be fixing this.… And now XL," Dorran said. "Why aren't they seeing that? Why does it have to get to this point?"

Dorran was referring to a major meat recall involving Maple Leaf Foods in 2008, and the recall of products contaminated with Listeria monocytogenes in an outbreak that killed several people and made dozens sick.

"The priorities for the employees are [loyalty] to their employer. You can't split loyalties on this. It doesn't make any sense to me."

That's why, for Dagenais, the XL Foods situation, in the largest beef recall in Canadian history, didn't come as a surprise.

A spokesperson for CFIA insists HACCP is working well and is the worldwide standard for meat inspection.