More Calgarians struggle to feed their families over the summer months

More and more Calgarians are finding it difficult to provide themselves with nutritious meals on a regular basis. More than one in 10 households already experiences some level of food insecurity.

Michelle Banks feels no shame in admitting she uses the Calgary Food Bank to get through what's been a stressful and worrying couple of years.

Banks and her three young children are considered "food insecure" — a growing problem in this city that has yet to show any sign of letting up.

Being food insecure means that you don't have adequate access to food because of financial constraints.

According to the Canadian Community Health Survey, 11.4 per cent of all households in Alberta — approximately 169,000 — experienced some level of food insecurity in 2014, and that's when Alberta's economy was booming and jobs were plentiful. Since then, the economy has tanked and has posted two straight years of recession.

While non-profit groups, private businesses and volunteers scramble to feed hungry Calgarians, experts warn that food banks and free lunch programs are not the solution.

What's needed, they say, is a basic income guarantee to help eliminate the growing number of people living in poverty.

"It's been tough for us," said the mother of three. "We have been low on food so we've had to use the food bank and stuff like that."

Banks picked up a few bags of food at a Boys and Girls Club of Calgary summer camp that her children are attending in southeast Calgary.

The hampers are being distributed over the summer months. Many of the 30 children who attend the camp are also given sandwiches, snacks and fresh fruit.

It's part of a pilot program to reach hungry kids during the summer when school is out and they don't have access to community lunch programs.

It's called Food Finder YYC, and it's being run by a number of organizations, including Brown Bagging for Calgary's Kids, an organization that provides lunch to 3,200 children every day during the school year. 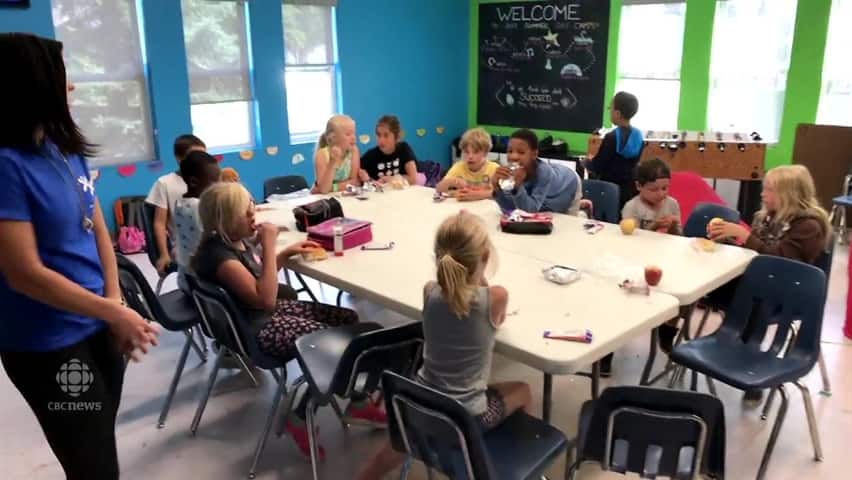 How Food Finder YYC is helping Calgary kids through the summer

4 years ago
0:32
Children and families in need simply text "food" to a certain number and they'll be provided with information about how to qualify and where to pick up the food. 0:32

"This just broke our hearts, to think that these kids we are feeding during the school year ... have nothing to eat [during the summer]," said Tanya Koshowski, the agency's executive director.

Children and families in need simply text "food" to a certain number and they'll be provided with information about how to qualify and where to pick up the food.

"This isn't for entitlement or laziness or taking advantage of something," Koshowski said. "It's about families or kids that are in need."

Another agency that helps feed hungry Calgarians is the Community Kitchen Program, and it's seeing an increase in demand. It's hoping to feed 15,000 kids this summer.

Lana Avery, one of the staff members at the Community Kitchen Program, says at one of the lunch delivery locations a boy told her he was grateful for the food because he hadn't eaten in three days.

"It broke my heart," Avery said.

The problem is hunger and poverty

The organization is looking to provide more than the 130 current pickup locations because of growing demand.

"People are going through hard times, loss of jobs, not being able to feed their children. They're just everyday citizens like you and me, and they've fallen on hard times," said Sundae Nordin, the non-profit's CEO.

Although some indicators show Alberta's economy is on the rebound, her agency hasn't seen it translate to fewer clients.

"We are seeing an increase, definitely," Nordin said. "The problem is hunger and poverty in our city."

Food banks and children's feeding programs are not the solution, according to Lynn McIntyre, professor emerita of in the Department of Community Health Sciences at the University of Calgary.

"That is absolutely not a solution. Income is a solution," McIntyre said.

She says food banks have risen from being a temporary measure in the 1980s to becoming institutionalized, and have made people think they are part of the solution.

"It really distracts people from understanding what the root cause is," McIntyre said.

Yvonne Stanford, with the Calgary-based Basic Income Action Group, has been advocating for a basic income guarantee for years.

She says boosting wages to either Calgary's living wage, now estimated at $18.15 per hour, or a percentage of the low income cut off could help reduce poverty and ultimately food insecurity.

"From a human rights perspective, every one of us will benefit from a more equal society," Stanford said.

People experiencing food insecurity are more likely to have any number of chronic health conditions, such as diabetes, cardiovascular disease, hyper-tension, mental health disorders, migraines, back problems and asthma, according to a director in nutrition services with Alberta Health Services.

"Even at the marginal level ... your risk of having poor health and poor health outcomes is considerably higher," said Sheila Tyminski.

Tyminski says research from Ontario shows health care costs for people who experience marginal to severe food insecurity is 23 per cent to 121 per cent higher compared to people who are considered food secure.

Koshowski says that while she agrees that food banks and children's food programs shouldn't be considered a long-term solution to hunger and poverty, she remains committed to helping those in need.

"We do believe that if kids are in need for food that it does take a village to raise a child. So the community has the resources and the capacity and the desire to actually want to care for kids," Koshowski said.

"It's very important it's there, especially if you're lacking in food. In some way, you're always covered because there's people who are kind and generous out there to help other people and families," said Banks.