The arrival of Stampede brings thoughts of corn dogs and mini doughnuts, but for Lourdes Juan it's an opportunity to rescue tons of food before it hits the landfill or compost bin.

The arrival of Stampede brings thoughts of corn dogs and mini doughnuts, but for Lourdes Juan it's an opportunity to rescue tons of food before it hits the landfill or compost bin.

She saw the potential for Leftovers Calgary, the organization she founded, at last year's Stampede.

This year, she's working with the Calgary Stampede and will be there for all 10 days.

Juan, an entrepreneur with a master's degree in urban planning and a spa in the Marriott hotel in Seton, recognized the need for an organization devoted to diverting unused food back in 2012, when she found herself picking up a load of day-old goods at Cobs Bread.

"My cousin was picking up for his church, I had a truck at the time and so we went and picked up 200 pounds of bread," she says.

With such a big load, Juan brought the excess to the Drop-in Centre, where she was surprised to hear it would be gone by the next day.

"My mind was blown," she says. "I wondered who else could give us food — I just started calling people. I called Starbucks and asked if they could wrap up their food at the end of the night, and I'd come pick it up. And it just spread like wildfire."

When she realized she couldn't keep up with the pickups, she enlisted the help of family and other volunteers. Five years later, she has almost 200 volunteers between Calgary and Edmonton.

"Our model is scaleable," she says. "What we do is all volunteer powered, so if we have the will to do anything we want to do, it just gets done."

The group rescues 3,000 lb. of food every week in Calgary, and another 1,000 lb. in Edmonton, from 55 vendors ranging from restaurants to grocery stores.

"That's just scratching the surface," she says. "It's the tip of the iceberg — we can rescue so much more food. When there's an influx of volunteers, we take on more vendors."

In Canada, $31 billion worth of food ends up in landfills or composters each year, according to a 2014 report from Value Chain Management International.

Leftover Calgary volunteers pick up excess food — they focus on perishables — and distribute it to 32 different service agencies.

"Their needs are varied," Juan says. "Some don't have a commercial kitchen, so we ensure they receive prepared food. Others don't have a refrigerator, so we have to make sure what we're delivering doesn't require refrigeration. We source out food too — if an agency tells us they need dairy, we'll find them dairy."

Juan and the team at Leftovers Calgary was involved in the Feeding the 5,000 event this past Thursday in Olympic Plaza — along with the City of Calgary, Calgary Regional Partnership, SAIT, Not a Robot studios and a team of volunteers.

The group collected food that would otherwise be discarded and enlisted the help of SAIT chefs, led by culinary arts instructors Andrew Hewson and Simon Dunn, to transform the ingredients into half a dozen dishes to serve lunch to 5,000 Calgarians.

An estimated 6,750 portions were served.

Much of what the group collects is bread and baked goods, but there's plenty of produce too, which agencies need. Some of the produce is wilted, but some is simply discarded for aesthetic reasons — items like tomatoes and peppers that are the wrong shape and size.

The Feeding the 5,000 initiative was part of a global movement that originated in the United Kingdom, aimed at raising awareness of food waste and generating ideas about what can be done with food we might otherwise throw away.

The Calgary event was so well attended and ran so smoothly, Leftovers Calgary hopes to make it an annual event in addition to its year-round efforts.

"It's an amazing community — we just get it done," Juan said in the midst of thousands of Calgarians from all backgrounds gathering in Olympic Plaza for lunch. "I love Calgary, in this space, right now." 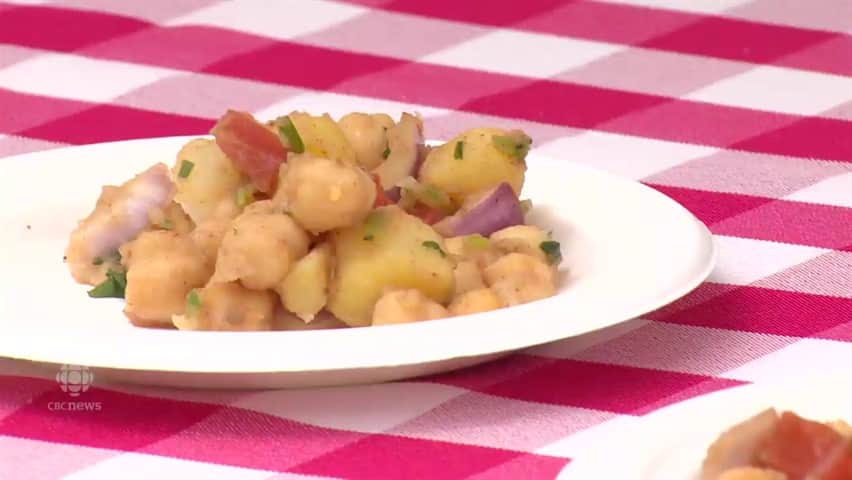 4 years ago
0:29
The Recycling Council of Alberta wants to reduce the amount of edible food that ends up in landfills. 0:29