Lethbridge County is now under a state of emergency as flooding continues to ravage southern Alberta — and the weather in the area is not helping.

Lethbridge County is under a state of emergency as floods ravage southern Alberta — and the weather does little to help.

More than a dozen roads are closed and a couple homes may be threatened by high water, Lethbridge County Reeve Lorne Hickey said shortly before noon.

"We have a significant amount of water coming in certain areas so we may have to look at evacuating a few people," he said. 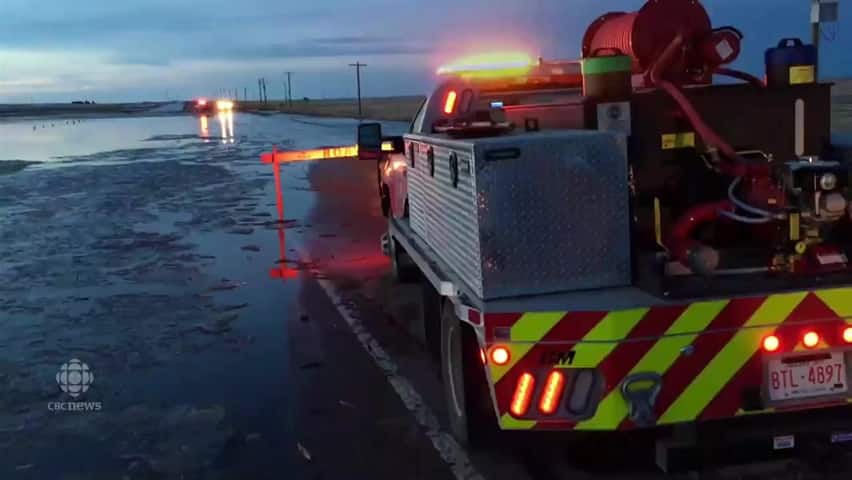 A larger than normal snowpack has been melting in the past week, flooding farmers' fields during planting and calving season.

On Monday, a mix of light snow and rain added to those headaches.

In an update issued at 4 p.m. Monday, officials said flows slowed in some areas throughout the day but there was still localized flooding throughout the county.

Crews were going to continue monitoring the flooding overnight.

The Lethbridge area most at risk, Hickey said, is in the county's southeast at Highway 4 and Highway 845. Water is overflowing the drain at that intersection, known for the business Wilson Siding. The water is up to the edge of two homes.

Other homes in the area are OK so far safe.

"But you never know how much water's going to come," Hickey said.

Lethbridge County Council has brought in seasonal staff to help mitigate flooding. They've dispatched drones to monitor flood levels, and staff are using pumps to divert water to other drain systems, he said.

That's after they tried to clear drains, culverts and ditches of ice and snow to prevent flooding.

​Council believes "there is an imminent hazard to infrastructure and property," according to statement issued Monday morning.

It has directed staff take "whatever actions are necessary" to save private and public property from damage — focusing especially on protecting homes.

Multiple stretches of road in Lethbridge have been closed due to flooding, the county said on Twitter:

Lethbridge is asking drivers to stay off these roads, respect barricades and use common sense.

On Saturday, a driver of a half-tonne truck drove through water so deep, it reached halfway up his door, Hickey said.

"They got out and everything was OK," he said. "But I mean, if you had your family there in your vehicle, yeah, don't do that. Just stay away from those areas."

If people want to help with flood relief, Hickey suggested assisting neighbours with sandbagging, but only if it's safe to do so.

Nearby areas, such as the M.D. of Taber, have had flooding for weeks now. An emergency alert had been issued for the area, and the Town of Taber had declared a local state of emergency.

Flooding is winding down in Taber, the town said early Monday afternoon, and the state of emergency was expected to end by Tuesday. Water is no longer threatening homes or infrastructure in the community.

Tom Sampson, head of the Calgary Emergency Management Agency, says they were contacted by the province on Monday about providing assistance.

"Of course, we do have, from the 2013 flood, a number of high volume trash pumps that can be made available," he said.

"We've certainly offered to make those available if other areas need them. At this time, those would be deployed with Canada Task Force 2, our heavy urban search and rescue team."

A trash pump is powered by a hydraulic unit which moves the water.

One of the challenges faced in southern Alberta, said Sampson, is the land is very flat, meaning water doesn't move readily.

"It's not just simply a pumping challenge, you've got to be able to move the water to somewhere so it can get away from the problem area."