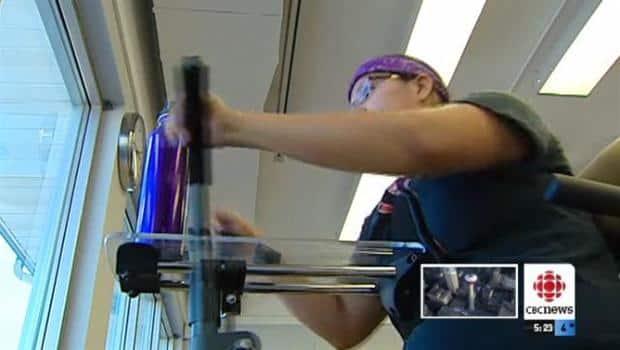 The free fitness program at the Canadian Paraplegic Association in Calgary is stepping in where government funded therapy ends.

"We're filling a gap because we have some of our clients who are travelling to southern California where a similar facility is. It costs a lot of money," said Toby Redfern, a program manager.

The training is aimed at reactivating muscles and nerves affected by spinal cord injuries and to improve people's breathing and keep them healthier.

Fitness coordinator Kelly Nitchie said the changes he's seen in the first eight weeks of the program are remarkable. "It's exciting to watch it."

Participant Stewart Midwinter broke his neck in a paragliding accident last August. His government funded therapy ran out in December.

"It's hard not to take it personally and feel that the system has just decided you're not going to get any better and that you're basically trapped in the body in this situation forever."

For two hours, three times a week, Midwinter works out in a specially designed gym doing aggressive repetitive exercises. Six weeks ago, Midwinter couldn't sit on a mat unsupported, but now he can.

"Having this program has been a reason to get up in the morning," he said. "My goal is just to be able to sit on the grass in the park, park my chair out of the way and not have anybody be able to see I'm different than everybody else."