Calgary fire crews have now contained a major fire at a condo complex in the city's southwest.

Residents return home to smouldering complex, which has been evacuated for the night 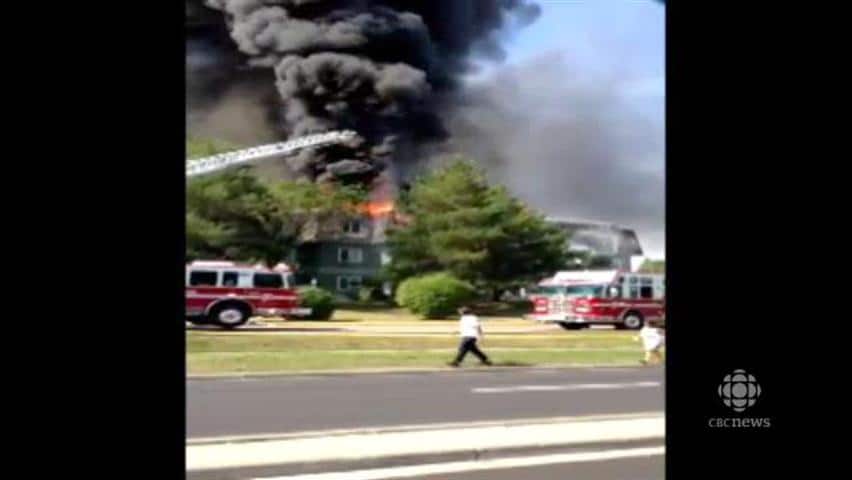 8 years ago
0:58
Chris Davidson took this video of a condo fire near Southhamtpon Drive in southwest Calgary. 0:58

The Calgary Fire Department has contained a major fire at a condo complex in the city's southwest.

Crews are now just putting out hot spots after battling the flames since just after 1:30 p.m. MT in the 300 block of Southhampton Drive S.W.

"Crews arrived to a three-storey condo building fully involved in fire," said the fire department in a release. "A second alarm was struck."

Some residents of the Southampton Green Condominium Complex, which had been evacuated, returned home to find their building smouldering.

"The third floor of the building received significant damage and there has been a partial collapse of the structure," said the fire department.

Fire officials say at least 16 units were affected by the blaze, but a firewall in the complex helped contain the flames.

"The design of this building actually worked to our favour," said battalion Chief Allan Ball. "There was a firewall built inside the structure and that assisted us in keeping this confined to one portion of the structure."

There were no injuries, but some firefighters were assessed by EMS because of intense heat coming from the flames.

CBC reporter Devin Heroux said crews were able to stop the blaze before it reached a pile of fireworks, worth about $1,000, inside the complex.

Residents of the damaged building will not be allowed back in their homes tonight, but the Calgary Emergency Agency was on scene to help those displaced by the fire.

Elbow Drive had been closed in both directions from Anderson Road to Southampton Drive S.W., but has since reopened.

The cause of the fire is still under investigation and there is no damage estimate at this time.