A group of volunteers is collaborating to fill an Alberta Health Services order for 12,000 face shields. Team lead Shannon Hoover says they're hoping to prove sourcing local is the best way to solve a problem and he hopes this highlights Calgary's talent beyond oil and gas. 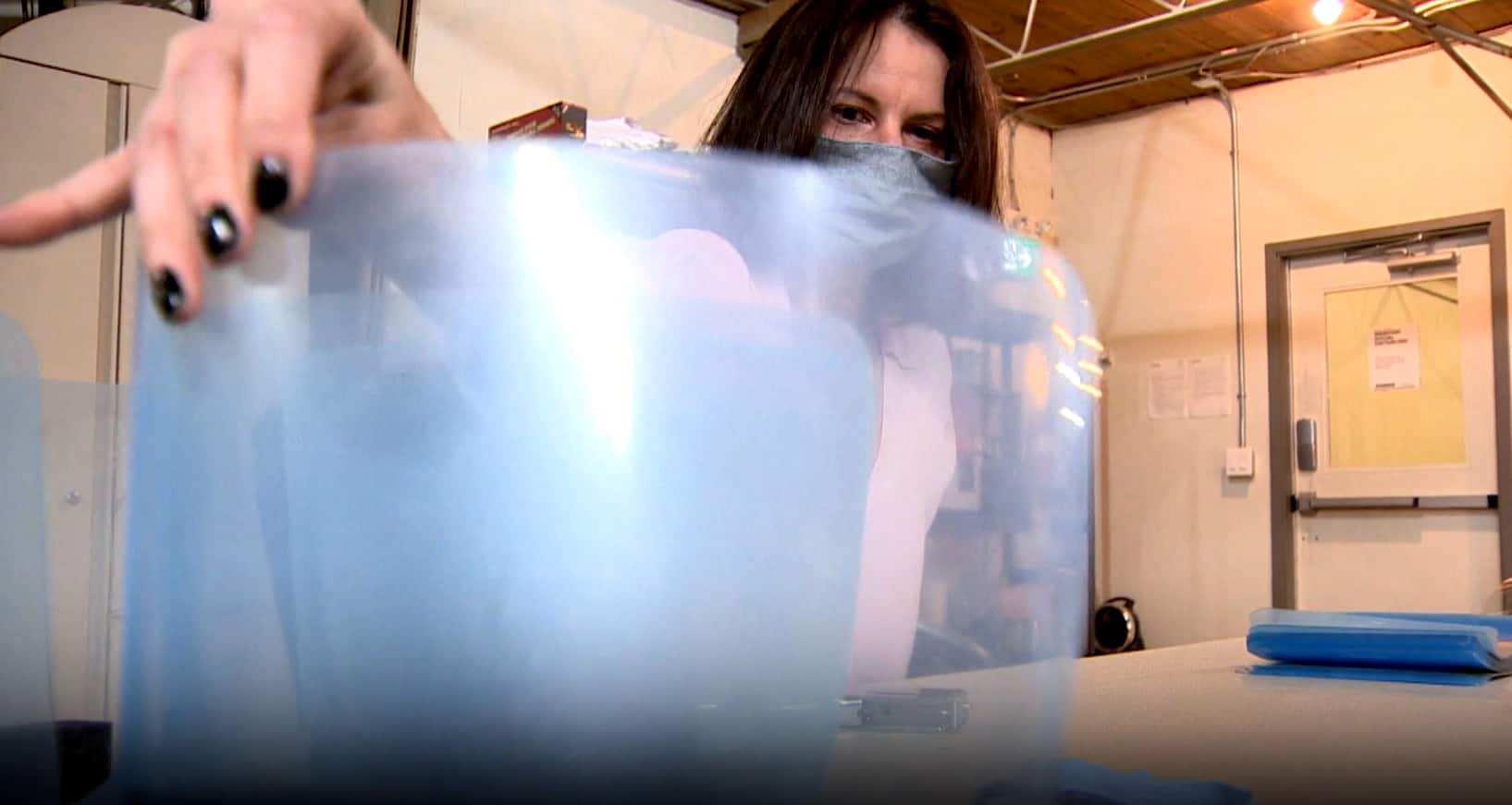 10 months ago
1:43
This maker space has pulled together volunteers and experts to solve a problem currently facing the world: access to face shields for those on the front lines of COVID-19. Find out why one of them thinks the model should be used to solve more problems in the future. 1:43

A group of Calgary volunteers has turned a shared community space into a PPE workshop and is now filling an Alberta Health Services order for 12,000 face shields.

Now, volunteers who use the space have come together from a variety of backgrounds including design, fabrication and logistics to create a manufacturing hub for PPE with hopes its latest order will highlight Calgary's talent and economic potential in areas besides the energy sector.

"This is something we should be looking at to create resilience in our economic system as well as ensuring that Alberta has people that are able to compete on the global market that's something that's not just oil," said Shannon Hoover, managing director of Fuse33.

Hoover says pre-pandemic, Fuse33, which is accessible to the public but largely membership driven, was open to artists, engineers, or anyone wanting to tinker with different tools.

It is also a place where entrepreneurs can build prototypes or do small-scale manufacturing runs.

But Hoover says after everything shut down, there was still a desire to create.

A few different groups started to come together in an effort to create a local supply of PPE.

The groups include Orpyx, a medical technology manufacturer and Shield Makers YYC, which includes some researchers from the University of Calgary.

At first the team worked with other volunteer groups like the Alberta Ghostbusters, who helped identify a need for face masks, shields, or hand sanitizer. Hoover says the production team would fill that need.

Then AHS called. After a few tweaks to the face shield prototype design, Hoover says AHS placed an order for 12,000 shields.

So far they've made about 2,000 shields and with the team's ability to make about 750 to 1000 per day, Hoover estimates the order will be completed in about two weeks.

Hoover says there's a shortage of the type of plastic they need to make the visor but another order is on its way.

"We already have all the volunteer shifts all lined up, got about 30 volunteers that will be participating in this, we have the stations all ready to go, as soon as the material in we are going to start lasering and working," said Hoover.

Among the team of volunteers is mechanical engineer Stephanie Shaver. She outlines the manufacturing process and ensures products are standardized

"When I heard there were a bunch of people coming together from different disciplines to work together it inspired me," said Shaver, who worked in pump manufacturing before switching over to tech startups.

Shaver says she's now looking for something new and is seeing what this latest opportunity turns into.

"It feels like we can actually do something that really matters," said Shaver.

Another volunteer, Stephanie Chan, is in charge of procurement: sourcing foam, adhesive and plastics needed to make the face shields.

'Build this thing, do something meaningful'

She has experience using a 3D printer in her job making custom orthotics as well as making foam chainmail for cosplay, movies and theatre.

"I just kind of dove right in and lined up all the materials and then I guess the rest is history," said Chan, who also helps organize the volunteers.

Hoover says the group's goal with the AHS order was to not lose money. He says in the end the group will be able to cover the cost of materials and a bit of rent.

The group has other goals, says Hoover, besides making money.

"Build this thing, do something meaningful, have a group of people get a sense of accomplishment, like they did something cool, and then during that process get some visibility for the community, learn how to take an idea to production and we've done that," said Hoover.

Hoover believes this project has given the volunteers confidence and proven that they are a reliable source for the government to turn to in the future.

He says he's already heard from a dentist who needs a modified face shield and he's hoping to turn this collaboration into a lucrative business one day.

"I want anybody to always think about 'okay I have this problem, let's find a solution locally' instead of saying 'I'm going to look on Amazon for this and if it doesn't exist on Amazon then I am going to make do,'" said Hoover.

Hoover says discussions are now underway with the federal government to help build a national stockpile of PPE.

With files from Nassima Way