The time-honoured tradition of farmers walking the fence line and strolling through their fields to check on crop and livestock health might soon be a thing of the past. More and more farmers are using drones to get a bigger, more accurate picture of what is really happening on their farms.

It's the end of a two-day course, and Wayne Krekoski is manoeuvring a drone through the parking lot of a community hall in St. Paul, Alta., like he's been at it for weeks.

Krekoski already owns a drone, but he recently took part in training course to learn how to put it to its best use on Thoughtful Farms, the 600-hectare mixed farm 200 kilometres northeast of Edmonton he runs with his wife, Wendy.

For Krekoski, that means using the drone to pinpoint problems with his crops and solving them in the most environmentally friendly way. It could allow him to spray herbicide or fungicide on a small area, for example, rather than widely across his crops.

That is just one way drone technology is increasingly being used in agriculture. Drones give farmers a bird's-eye view of their land — even the parts they would otherwise have difficulty getting to — and allow them to gauge the health of crops.

"We also have drones that fly a sensor across a field, and it will tell you whether you have healthy crops, unhealthy crops, stressed crops, whether it's trampled, whether there's been some damage from frost or hail, all those types of things, we can measure those," said Markus Weber of LandView Drones, an Edmonton company specializing in agricultural applications of drones.

Weber says his company's so-called drone schools are in demand all over Alberta and Saskatchewan, with 10 training sessions planned for this spring alone.

In the classroom, the farmers work on iPads and learn how to program a drone to map specific areas. Once the drone has completed its path, they'll use software to stitch the images together into a map that clearly identifies where the problems are.

Steve Upham, the reeve of St. Paul County, 200 kilometres northeast of Edmonton, is a cattle and grain farmer himself and he sees a growing interest in drones. He estimated 10 per cent of farmers in and around St. Paul use drones.

"The younger generations are tying onto it," he said. "And I think the old boys are enjoying it because it's a toy a little bit."

"Take a look at my truck. It can take me an hour and a half to check cattle, right?" he said. "I'm sitting at the gate with the drone, and that can be done in 15 minutes. Time is money for us, so yeah, there's a lot of benefits to ownership."

A drone tracks a herd of cattle: 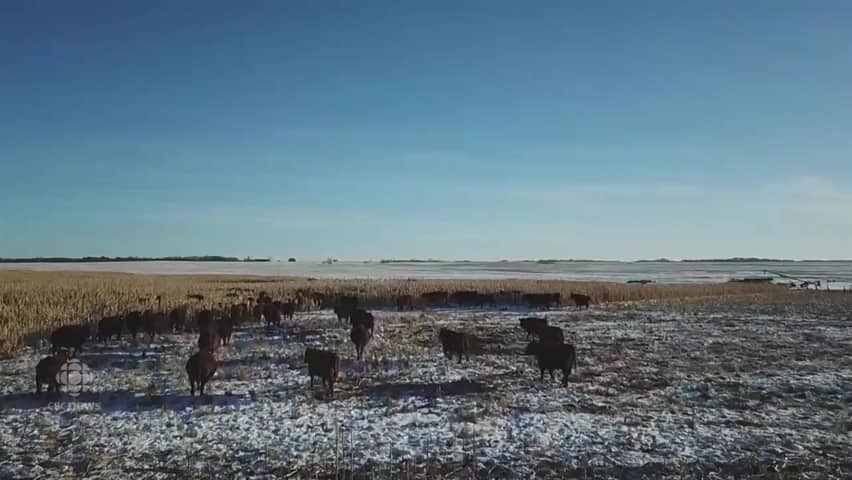 2 years ago
0:41
Drones can be used to check location and general health of livestock and also be used to help move them. 0:41

Convenience comes at a price. A drone unit with mapping software can run from as little as $2,500 all the way up to approximately $20,000.

The higher the price, the more advanced the cameras and sensors the drone has.

Cost is not the only barrier.

When there is a drone in the air, it automatically raises privacy concerns — especially since some of the cameras are high-powered and shoot incredibly detailed images from up to 120 metres in the air.

A farmer's field as seen from the air by a drone: 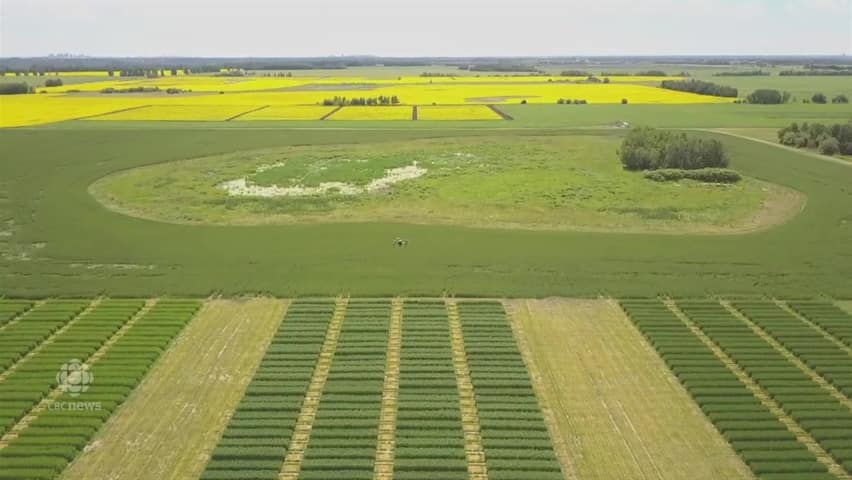 A drone surveys the state of crops

2 years ago
0:31
Drones are being used in agriculture to pinpoint problems and prescribe solutions 0:31

Another obstacle to agricultural drone use are current Transport Canada regulations, which specify a drone operator can only fly it within line of sight.

That means on large farms, a drone can only cover a fraction of the land. The operator would need to drive out to capture images further afield.

Weber expects those regulations will change as the technology advances.

'Way of the future'

While a drone can currently identify problems, it cannot reveal precisely what they are. Soon, drone sensors will be able to diagnose very specific crop and land issues.

"Pick a quick picture and we'll tell you what exactly the problems with nutrient levels are, or what type of pest is attacking it," Weber said. "And we're only a few years from that being reality."

30-year old Justin Moser is back working with his father on the family farm after an eight-year stint in construction.

"I think this is the way of the future," he said as he learned to operate a drone. He is considering buying one.

But, make no mistake, farming is serious business, and Moser is among the farmers who see drones as a serious tool.

"I want it for its practical purposes, not just to go fly around on a Saturday afternoon. This is more business to me."