Chris Hibberd and Anistasia Mechefske were married in a masked 10-person ceremony at Flores & Pine restaurant in Bearspaw on Wednesday — while 28 cars full of wedding guests caught the ceremony on Zoom in the parking lot outside. 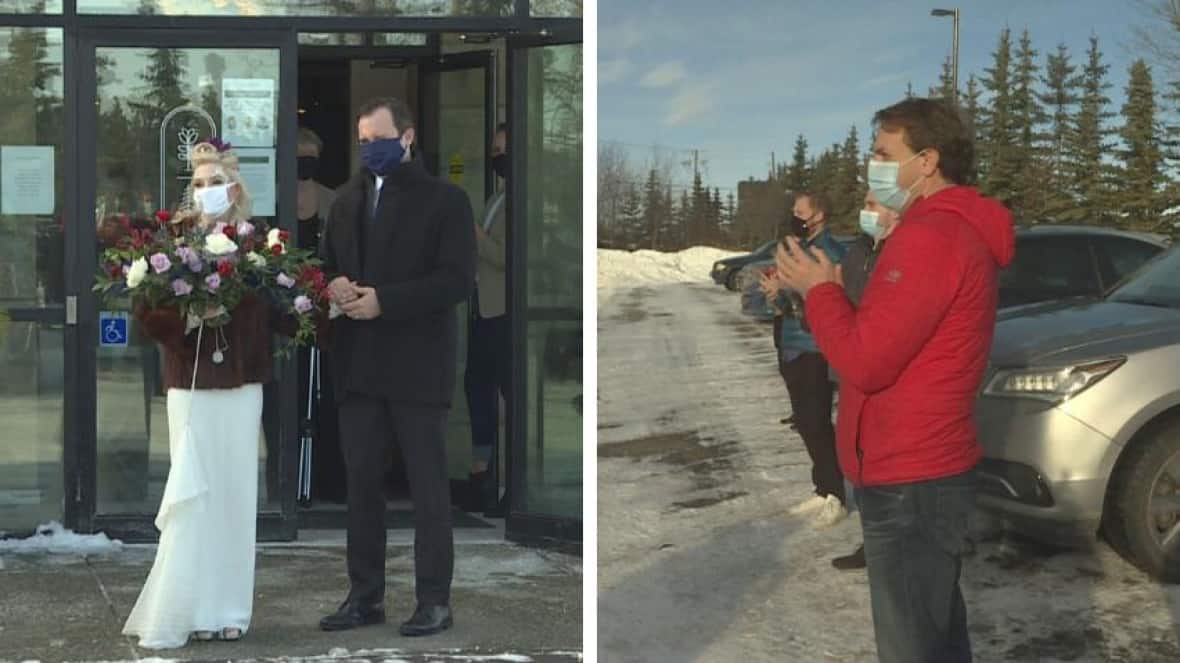 2 months ago
2:54
In a year of cancelled plans and postponed events, a Calgary couple decided to keep their wedding date despite COVID-19 restrictions by making it a drive-in event. 2:54

In a year of cancelled plans and postponed events, a Calgary couple decided to keep their wedding date despite COVID-19 restrictions by making it a drive-in event.

After a year-and-a-half of wedding planning, Chris Hibberd and Anistasia Mechefske were supposed to be married in front of 150 guests on Wednesday.

Unfortunately for the couple, the pandemic threaten to derail their plans, but they eventually decided to get married anyway — and still found a way to include family and friends.

Hibberd and Mechefske were married in a masked 10-person ceremony at Flores & Pine restaurant in Bearspaw on Wednesday — while 28 cars full of wedding guests caught the ceremony on Zoom in the parking lot outside.

"It's been a very difficult time, but it's also a great event for us, [and] we wanted to make sure that we shared it with people … and have something positive and good before the end of the year," just-married groom Hibberd told CBC News after the ceremony.

"We appreciated the support, and that we had a lot of people show up and it was very meaningful for us."

Around the time the bride and groom started planning their wedding, COVID-19 was not yet an issue, Hibberd said.

Even when it emerged in Alberta last spring and restrictions shut down restaurants, reduced gatherings and kept Albertans at arm's length, Hibberd and Mechefske still didn't think it would jeopardize their plans, especially after cases decreased in the summer.

But in recent months, the numbers spiked again, and new restrictions eventually followed that presented tough decisions for the couple.

"We did discuss pushing [the wedding] back … [but] we've been together for a very long time, so this is a lot longer than a year-and-a-half in the making," Hibberd said.

What Hibberd and Mechefske did to include their guests while adhering to the public health restrictions proved meaningful for those in attendance.

Dressed up in their cars, watching the ceremony on cellphones in the parking lot, and awaiting a take-home four-course meal catered by the venue, they said sharing the day with their friends — and during an unprecedented time — felt special.

"This is fantastic. They have to find some way to celebrate, so that's what they're doing," wedding guest Barry Munro said from his car.

"We're going to have champagne after and celebrate them. It's fantastic, a beautiful day."

According to Valerie Guinn, who also watched from her car, an offbeat and thoughtful ceremony was actually aligned with the bride's personality.

"[Mechefske is] a very unique person, and she's a very loving person, so to try and incorporate everyone as much as they can — it's right down Anistasia's alley," Guinn said. "And that's what they did."

Brye Ponto, the general manager of Flores & Pine, said she hopes the idea catches on.

She was also moved that in spite of everything, the couple got married anyway.

"It was amazing. It was very cool to see people who are in love get married, and they obviously didn't want to hold it off — they wanted to get married in the middle of this weird pandemic," she said.