Business owners say dogs in the office create a fun, relaxed environment with less stress, and they're trying to balance health risks and noise.

Finding a balance between furry pets and noise considerations, allergies

At some offices, dogs are more popular than people.

On any given day, seven to 10 pups bounce around Benevity, a tech firm in Calgary. Workers play fetch with their pets or let them sleep at their feet. Sometimes the furry critters play with each other, livening up the already colourful, relaxed office in Bridgeland.

"It just makes people happy," said people and programs manager Angie Duong. "I think you see people who are fiercely focused and they're just working away, and as soon as a dog comes into the picture, they just melt."

People love their dogs, and businesses are booming as a result. There are pet stores and dog groomers, dog walkers and doggy daycares, and pet-friendly beaches, trails and parks — and even so-called "pet-ternity," leave that owners can take after adopting a new animal.

But a few are leading the pack by allowing their employees to bring dogs into the office. It may sound like a fun idea but can take quite a lot of organizing and consideration of health concerns.

The trade-off, they say, is the less stressful, more relaxed environment that comes with a pet-friendly office. 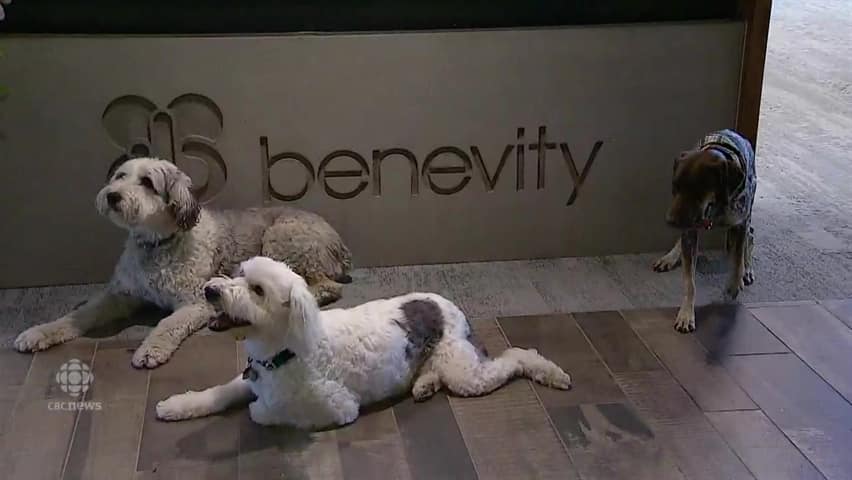 2 years ago
1:11
Business owners say dogs in the office create a fun, relaxed environment with less stress, and they're trying to balance health risks and noise. 1:11

Benevity employee Jodi Stapley, who brings her dog two days a week, says she use to worry about leaving her dog home alone.

"She's an old English sheepdog who really likes to just be with her person. That's a trait a lot of them have," she said.

"She just laid under my desk, laid on my feet, and she was a perfect little angel, so I started bringing her in more and more often."

The company has had this program since its inception a decade ago. It now provides doggie doo-doo bags at reception and dog-specific cleaners in the kitchens. Cats are allowed, too, but aren't as common.

Wendy Giuffre, an HR consultant for Calgary small businesses, said she's encouraged companies to develop guidelines to avoid problems — even if things appear to be running smoothly for now.

"It's obviously got to be a well-behaved dog, and that's where we find some of the problems because that's very subjective," she said. "It's just like kids. Everybody thinking, well, my dog's well-behaved."

Another key concern is allergies. Some people get sinus symptoms — sniffles and watery eyes — but in other people, allergies can trigger asthma. Anyone with an allergy should be avoiding the trigger entirely, not managing it through daily treatment, said Dr. Joel Doctor, a Calgary allergist. Prolonged exposure to a "trigger," like pets, can make an allergy worse.

In allergy-induced asthma, animals could trigger a severe asthma attack, and that can be dangerous, Doctor said, so he struggled to see how a workplace could bring in pets while protecting employee health.

"The benefit has to be weighed very carefully against the risk, and so the benefit is kind of questionable," Doctor said. "I'm not sure what the real benefit there is to having animals in the workplace, yet for some individuals, there is significant risk that would be involved."

He said perhaps dogs could help in "some really niche workplaces," but he's confident the practice won't spread widely due to the health concerns.

A study published in the International Journal of Environmental Research and Public Health suggests there are potential benefits to dogs in the workplace, such as higher morale, productivity and attendance. But it notes research is preliminary and recommends employers consider all parties before adopting the practice.

A director for Calgary-based Rogers Insurance says staff try to keep those people away from dogs. They say they're not scared of pulling the program if something arises, but, so far, it's worked smoothly.

"It's invisible now. All the fears that some people had, people being afraid of dogs, people being allergic to dogs, we never have complaints," chief operating officer Bruce Rabik said.

He first allowed in dogs after trying to scare pigeons off the deck at work. Then other employees were curious about bringing in their dogs. Now, the office has an internal notice announcing each day's pet guests with their photos and names, as all dogs are registered with human resources.

It's so common, Rabik says, he forgets the dogs are there.

"I walk around, give people tours of the office and I forget we have dogs, because a puppy will come running up," he said.

As insurance brokers, however, Rabik said they do take "a conservative approach," so they banned three breeds, Rottweilers, mastiffs and pitbulls, based on research they found that indicates those are more aggressive breeds.

Benevity says all potential employees are told it's a dog-friendly office.

"We're really upfront during the interview process, everyone really understands that the dogs are really huge in our culture," Duong said. "So we make it really clear that if you have really adverse allergies or have huge fears of dogs, then this may or may not be the place for you."

Giuffre​ said that's not a good approach and may be construed as discrimination against people with health issues. Instead, she recommends trying to find a solution.

"I think you'd really have to take those case-by-case," she said. "It'd either be, abolish the policy or try and work around it in some way."

She's helped several offices set up dog policies. In one case, the business moved the allergic person's desk far away and set up an air purifier. Other options might be to allow only dogs with little dander, or give employees the option of working on a dog-free floor.

She suggests raising the idea with all employees to see if there's interest or opposition and then develop some sort of policy.

Businesses may find their employees are keen. Roughly one in 13 Calgarians and one in nine Edmontonians owns a dog, according to pet registration data. Statistics Canada has found Albertans are the third-highest spenders on pets in Canada.

In a "dog city" like Calgary, office pets can be a way to draw in employees, Giuffre said, a nice "no cost perk."

"It does bring a different level of casualness to the business and, in most cases, it lightens the atmosphere, no different than comfort dogs," Giuffre said.

With files from Mike Symington and the Calgary Eyeopener.